It’s practically a rite of spring in St. Paul now: The trees blossom, the birds come back — and the workings inside the Minnesota Capitol go dark.

That’s what happened this week, as negotiations over the state’s two-year, roughly $45 billion state budget went from plodding steadily toward a resolution to what seemed like a sudden break, between the Republicans who control the Legislature and Democratic Gov. Mark Dayton.

Those tensions set off a series of moves by Republican leaders that started late Monday and went into Tuesday evening, as GOP lawmakers worked to send their budget bills to Dayton’s desk — without a compromise.

In response, the governor assured reporters Tuesday that he will “veto them all,” leaving everyone in the dark as to what happens next.

The two parties have less than two weeks until May 22, their constitutionally imposed deadline to adjourn the 2017 session. If they don’t finish on time, Dayton can call legislators back into a special session to finish budget bills. But if that doesn’t happen before July 1 — the start of the next fiscal year — state government operations will go into automatic shutdown mode.

It was gonna be different this time

Like most sessions, lawmakers convened in January saying what they almost always say: that they didn’t want things to end this year with closed-door negotiations, late-night maneuvers and deals pushed until the final hours. That it was going to be different this year.

And it was, for a time. Lawmakers bumped up deadlines to get major budget work done and made it to negotiations with the governor earlier than usual. But, as in most sessions, the drama happened anyway.

“It’s had different forms,” Dayton said Tuesday, remarking on how recent sessions have all concluded with last-minute blowups. “We each have very different views about what’s best for Minnesotans. Minnesotans should expect that we’re going to have these very significant differences; the question is how we are going to resolve them.”

The rift came after Dayton and legislative leaders had spent the previous five days in meetings discussing a budget deal, usually emerging from those discussions with few details to share but generally positive remarks about the process.  They described talks as “productive” and “cordial,” even though lawmakers still had major differences to work out.

Those differences largely center on what to do with the state’s $1.5 billion budget surplus. Republicans want tax cuts — something north of $1 billion — though they also want to trim spending on health and human services and state government administration. The governor is proposing to raise spending on things like health care, education and state government.

On Monday, budget negotiations moved into the horse-trading phase. Dayton made an offer on four smaller budget areas — public safety, higher education, economic development and agriculture — reducing his proposed total spending by about $74 million, he said.

After the meeting, House Speaker Kurt Daudt emerged and said he’d hoped things were moving faster, but they were still making progress. “Things at the Legislature never move as quickly as I would like them to, and I’m sure the public probably feels the same way, but we are working hard and we are working well together.” 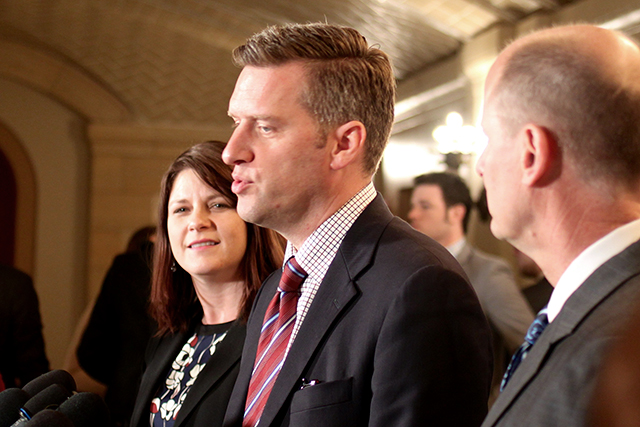 But behind the scenes, things started moving very quickly. Republicans left the meeting with the governor and went into meetings with rank-and-file legislators. Later that evening, they began preparing their own budget bills for a vote, with or without a compromise in hand. On Tuesday morning, Republican Senate Majority Leader Paul Gazelka said negotiations had slowed down over the weekend and the offers presented by Dayton on Monday were “unacceptable.”

“The steps were so small on the smallest bills that we didn’t know how we could possibly get there,” Gazelka said. “I think they were sincere first offers, but they were unacceptable and would not lead to getting done on time.”

Daudt said they were worried Dayton was “slow-walking” a deal because he would benefit politically the longer negotiations take. “The governor gains leverage if he pushes us to the end,” Daudt said, describing the move to vote on their budget as a “backup plan.”

Republicans and Dayton met again Tuesday afternoon, with Republicans presenting an offer on all of their budget bills, reducing their tax cut proposal from $1.13 billion to $1 billion and spending more on state government and health and human services. Dayton countered that with another offer on the four budget bills discussed the day before, coming down a total of $122 million.

Republicans left the meeting frustrated they weren’t making progress. Within hours, they began taking up their budget bills on the House and Senate floors.

‘I will veto every one of those bills’

What does this all mean for the end of session? At the very least, the move delays further negotiations between Dayton and Republicans. It will take several days for legislators to pass all of their budget bills and send them to Dayton. The governor said that he will veto all of the budget proposals.

“They should know that I will veto every one of those bills, which will leave us with the same differences several days from now that we face today,” Dayton said. “Their actions will make it much more difficult for them to fulfill their constitutional responsibility to send me budget bills, which I can sign, by May 22.”

Dayton added that the actions of the GOP leadership, in the middle of discussions with his office, have changed the tone of negotiations going forward. “All the flurry of activity over the last 12 hours without any discussion with us, without any forewarning,” Dayton said. “It certainly changes the tenor, for sure.”

Republicans and governor are not unfamiliar with discord: They went into a 20-day government shutdown over the budget in 2011, and the last two sessions under divided government have ended in acrimony, special session talks and plenty of unfinished business. 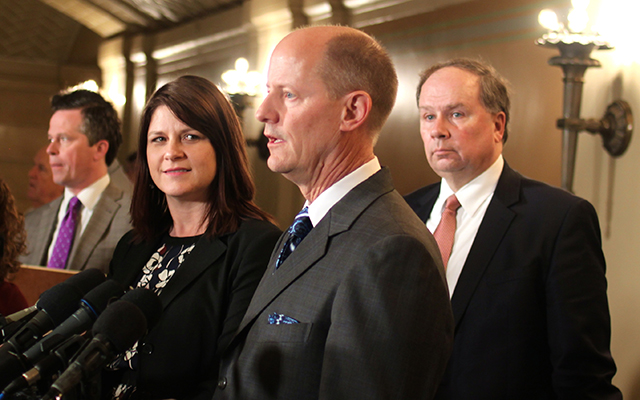 MinnPost photo by Briana Bierschbach
Senate Majority Leader Paul Gazelka: “The steps were so small on the smallest bills that we didn’t know how we could possibly get there.”

For now, all sides say they still want to work together, even if their actions are sending mixed signals about whether that can actually happen. “I’ve done this before and I’ve been involved in a few of the blowups before the breakthrough, and that does happen,” Daudt said Tuesday. “I don’t think this is [a blowup]. We want to work with the governor, we want to get this solved.”

For his part, Dayton remained open to meeting with Republicans on Wednesday, even as they continued to pass budget bills he plans to veto. Dayton’s daily public schedule, which he releases to reporters, read that Wednesday is “intentionally left open to be responsive to the legislative process.”

If that doesn’t happen, perhaps they’ll talk about it Friday. That’s when the governor and legislative leaders are scheduled to be together on a boat in the middle of the Mississippi River in St. Cloud for the state’s fishing opener.

After negotiations falter, Dayton vows to veto ‘every one’ of Republicans’ budget bills