In 2013, Somali-American residents in Minneapolis’ Sixth Ward did something some in the community considered impossible: They elected one of their own, Abdi Warsame, as the first Somali-American city council member anywhere in the United States.

Warsame was an easy choice for Somali voters back then, when he took on incumbent City Council Member Robert Lilligren. They wanted a leader who spoke their language, understood their values and lived their realities to represent the ward, which has the largest concentration of Somali-Americans in the state.

Today, Warsame is at the end of his first term, which means he — and members of the community — are getting into election mode as a new race for the seat unfolds, a campaign that pits the incumbent against longtime Somali-American activist Mohamud Noor and Tiffini Flynn Forslund, an education advocate. (The Ward 6 DFL convention has yet to take place — all three candidates are vying for the DFL endorsement.)

Still, the race is largely seen as a two-person contest between Warsame and Noor, who have similar backgrounds and political philosophies — a fact that many Somali voters say makes it difficult for them to pick a candidate.

“Mohamud Noor and Abdi Warsame are not different when it comes to policy issues in the city,” said Abdu-rrahman Mahmud, founder of Raxman Consulting, a firm that provides guidance in engaging the Somali-American community. “It’s difficult to differentiate them.”

And yet, whether it’s because of or despite those similarities, the Ward 6 race has already become intense and personal for both candidates and voters — a contest tinged by a complicated history of shifting alliances within a community that has become deeply invested in electoral politics.

Both are prominent leaders in the Somali-American community, people who’ve developed deep ties in the Ward, especially residents in the Cedar-Riverside, Elliot Park, Phillips West and Seward neighborhoods.

Warsame, who grew up in London, moved to Minneapolis in 2006 and founded the Citizen’s Committee for Fair Redistricting, a group of East-African representatives that participated in the redrawing of the city’s wards. His political rise was in part the result of that effort, which led to a 2012 plan to change the bounds of Ward 6. Afterward, the ward would include areas home to a large bloc of East-African residents, part of an attempt to increase representation of minority groups on the City Council.

In 2013, Warsame ran for the ward’s council seat against Lilligren, who was first elected to council in 2001. When Warsame won, he became the highest-ranking Somali-American elected official in the country. “The community saw [Warsame’s win] as a sense of hope,” said Faisal Derie, a graduate student at the Humphrey School of Public Affairs. “They realized that they could be elected to political office. It changed the mentality of the young generation who thought they might not be able to be elected for such an important seat in the U.S.” 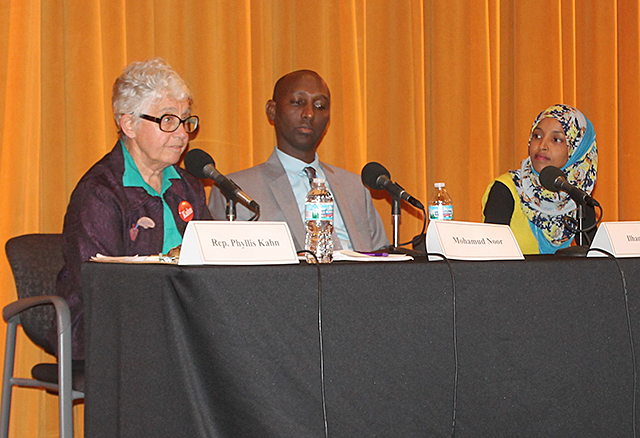 The following year, it was Noor’s turn to run a high profile campaign. A longtime Somali-American activist who runs a nonprofit, the Confederation of Somali Community in Minnesota, Noor decided to run against Rep. Phyllis Kahn — one of the Legislature’s longest-serving members — in House District 60B. For many in the community, the contest represented a rare chance to send the first Somali-American to the Capitol, a timely sequel to Warsame’s historic victory.

But there was at least one prominent official who had a different idea: Warsame. Rather than support Noor, he backed Kahn, who had supported him a year earlier in his race against Lilligren.

Warsame’s involvement in the elections amplified tensions between Kahn and Noor supporters. During the DFL caucus that spring,  an overflow crowd of more than 300 people jammed into a community center in Cedar-Riverside, where a scuffle broke out. Ilhan Omar, who was attending the caucus as a DFL official, ended up going to the hospital after being struck.

In the end, Noor lost to Kahn, a defeat that disheartened many Somali-Americans in and outside Minneapolis. “That was a blowback,” Derie said. “They were very disappointed.”

But two years later, the District 60B seat was once again up for grabs. And once again Kahn would be running against Noor, who hoped his second shot at the seat would allow him to become the first Somali-American legislator in the country.

This time, though, there was a third candidate: Omar.

That’s when things got even more complicated. Warsame, who had received sharp criticism from some in the community for supporting Kahn over his fellow Somali-American, wasn’t as vocal this time around — at least for the first few months of the race. After Omar came close to securing the DFL endorsement, however, Warsame decided to publicly back a candidate. It wasn’t Omar or Kahn, though. It was Noor.

That endorsement didn’t end up doing much good for Noor, however. In the end, both he and Kahn lost the primary to Omar, a 34-year-old activist who had secured other high-profile endorsements and went on to win the general election in the fall.

Today, when Noor is asked why he is running, he says it’s because Warsame didn’t do his job and because the community encouraged him to run. But he also says that Warsame — a man who campaigned for him just months ago — “didn’t stand with me when I was trying to make a change,” referring to his 2014 campaign.

There’s a reason why the race has tended to be so personal. Minneapolis has the largest concentration of Somali-Americans anywhere in the U.S., and the neighborhoods that form Ward 6 have long been a popular destination among Somalis when they first arrive in the state.

Many of the residents here still struggle navigating the complex workforce, housing, education and immigration systems in a country that can, at times, be intimidating to foreigners. In times of need, those residents often seek out activists and nonprofit organization leaders for assistance in everything from immigration questions and employment applications to court orders and landlord harassment.

Warsame and Noor have been among those leaders who have officially or unofficially served as the contact points for many of the most vulnerable in the community, and the people they’ve helped have often gone on to become their most loyal voters. When those supporters talk about Warsame and Noor, it isn’t about abstract matters like their support for certain policies or ideological principles. Instead, they speak of how their candidate has helped them apply for housing; saved them from eviction; or stood by them in a legal battle with federal or local law enforcement officials.

“When Somali-American voters want to vote for a Somali candidate, they don’t look at policy issues,” Mahmud said. “They don’t base their decision on issues. Rather, it’s about who they know, what the candidates did or might do for them after elections.”

When Noor talks about why he would be a better council member than Warsame, he says it’s because the incumbent hasn’t been effective in solving pressing economic issues facing residents. “This ward requires somebody who’s going to work for the people and be able to find the right solution,” Noor said in a recent interview with MinnPost. “The seat is closest to the people to impact change in their lives.” 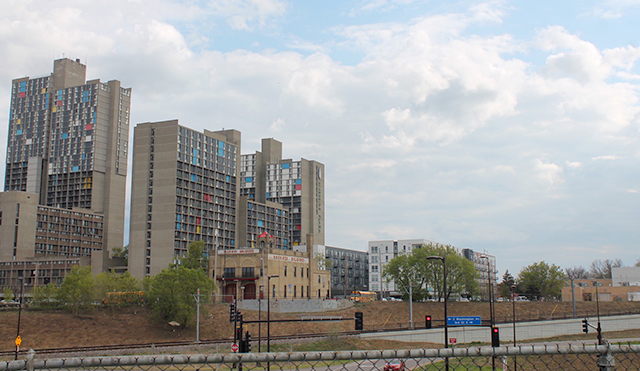 MinnPost photo by Ibrahim Hirsi
Warsame and Noor are prominent leaders in the Somali-American community, people who’ve developed deep ties in the Ward, especially residents in the Cedar-Riverside (above), Elliot Park, Phillips West and Seward neighborhoods.

Warsame is happy to defend his first-term, saying he’s already done much to improve the safety of the area, paving the roads, creating a career center and funneling resources to needy residents in the ward. “We’ve helped the most vulnerable members of our society,” he said.

In addition to that, Warsame says, he has co-authored a proposal barring landlords from turning away renters with low-income house vouchers and held a series of forums, on everything from Islamophobia and public safety issues to addressing the challenges that small businesses and people of color face in the ward. “I want to build on the experience that I have,” Warsame said. “I have a good experience in municipal government, I can get done a lot more in the second term because of the experience I gained.”

But Warsame, like Noor, also hasn’t hesitated to go after his opponent. Among other things, he’s questioned his challenger’s seriousness, given his history of running for four other public offices in the past. “My opponent eight months ago was running for state legislator,” he said. “The idea that he somehow understands Ward 6, the fallacy that he can bring all people together is nonsense.”

“Why is he running for every single seat?” asks Warsame. “Is he going to run for the Governor’s seat in 2018?”

Warsame has also made an issue of the fact that Noor’s organization is no longer located in the Brian Coyle Center. “My opponent cannot talk about running a Ward when he cannot run a small nonprofit,” he says.

The Somali-Americans across the state — and even outside of the state — are closely watching the campaign rhetoric between Warsame and Noor through Facebook and Twitter, with many publicly beating the drum for their favorite candidate, even as others struggle to differentiate one from the other.

“I don’t see that there’s any difference between them,” Derie noted. “All I see is that one candidate wants to get the political power the other has right now. And the other candidate is fighting hard to keep it.”