In another year, Cordelia Pierson would be the kind of candidate Minneapolis DFLers might be thrilled to recruit.

After all, Pierson, an environmental attorney and current director of the Minnesota Environmental Fund, founded the Minneapolis Riverfront Partnership and has been active in her neighborhood association.

But in the race to replace Minneapolis City Council Member Jacob Frey in Ward 3, Pierson will not go before the ward’s voters this fall. That’s because delegates to the ward’s endorsing convention on Saturday made it clear they preferred Steve Fletcher for the job.

After being told that the vote count favored Fletcher — either just under or just over the 60 percent needed to secure the endorsement (the exact number is unclear since the vote was never announced) — Pierson withdrew from the contest and dropped her campaign.

“I decided to withdraw because I wanted us all to be unified behind out next City Council member,” Pierson told delegates who had gathered in the auditorium at DeLaSalle High School. “But there’s something I want in return. I want each of you to show the leadership you promised to make this community a better place. May you give some of your time because Steve can’t do it alone.”

With that, the convention suspended the rules and gave the DFL endorsement to Fletcher, a community and labor organizer who clearly had the best-organized campaign. The founding executive director of Neighbors Organizing for Change, Fletcher counted support among labor and community activists that he has worked with in the past. His endorsements include the SEIU, UNITE-HERE, and the Teamsters as well as other union organizations. He’d also been endorsed by Our Revolution, the political organization that emerged from the Bernie Sanders campaign; and Stonewall DFL, the party’s LGBT caucus.

There was little animosity between the backers of Pierson and Fletcher, and a question-and-answer session during the convention showed little differences between the candidates. Both took positions that would endear them to the DFL rank-and-file: yes on $15 minimum wage; yes for more affordable housing; yes for new ways of policing that stress community and de-escalation; yes for calming the turbulence in City Hall.

There was one difference, however, that Pierson alluded to while answering a question about the minimum wage, though it wasn’t picked up by many of those listening. Pierson said she wanted to make sure the minimum wage didn’t hurt anyone or cause anyone’s wages to go down. The applause for her answer was equal to that when Fletcher stated his supporter for One Fair Wage, the agenda that supports a single wage policy for the city with no carve-outs for tips. 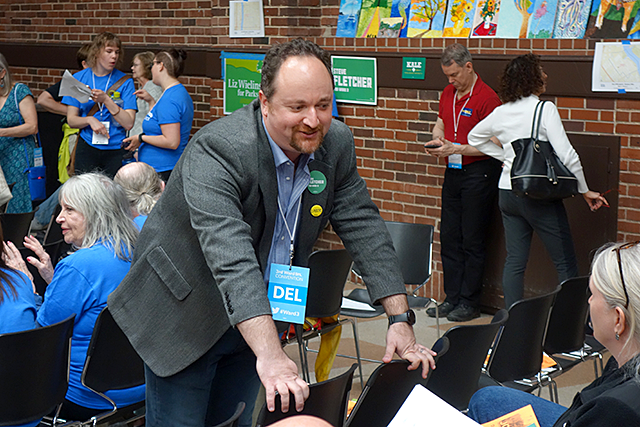 Afterward, Pierson said she was referring to restaurant workers and small business people and was open — though not committed yet — to ideas about making the wage ordinance work for tipped workers.

During the Q&A session with the candidates, Fletcher noted the importance of the DFL arriving at a single candidate since there will be a contest in November regardless of the party’s actions. That’s because two additional candidates are running under other banners: Ginger Jentzen as a Socialist Alternative candidate and Samantha Lee Pree-Stinson as a Green Party member. While council seats are technically nonpartisan, city election law allows candidates to be placed on the ballot with up to three words of description.

“How do we make sure we’re challenging ourselves to turn out more DFLers than we’ve ever turned out, to bring people over to real grassroots organizing and DFL values?” Fletcher said. He also said delegates needed to look for a candidate who “knows how to finish.”

Ward 3 has been center stage for Minneapolis economic boom over the last several years. Covering parts of downtown, North Loop, Nicollet Island, St. Anthony Main, Dinkytown and Marcy-Holmes, the ward is where the bulk of the new commercial and multifamily housing construction has occurred in the city.

Still, the conversation and the statements by the candidates Saturday sounded similar to campaigns in other wards. There were no NIMBYs in evidence. There was little talk about the impacts of all that construction and density. Instead, the issues of inequity, police abuse and affordable housing drove the debate. 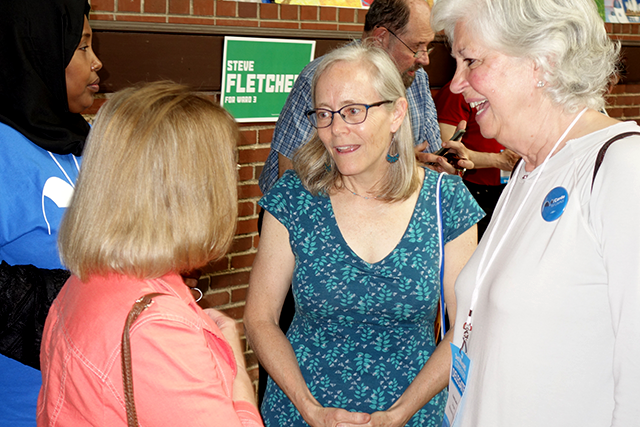 Fletcher at one point suggested that any developer seeking a variance would need to show how they were helping add affordable housing in the city. He later criticized Mayor Betsy Hodges and unnamed council members for not joining in the occupation at the 4th Precinct after the shooting death of Jamar Clark by a Minneapolis police officer.

Pierson’s withdrawal was expected after both candidates answered the first question posed — would they drop out if the other was endorsed? — in the affirmative.

How close she got to blocking Fletcher from the endorsement wasn’t announced, however. A Fletcher supporter said he’d gotten the 160 votes needed to reach the 60 percent threshold needed, but a Pierson backer said Fletcher had fallen a few votes short. She thought he would win on subsequent ballots and chose not to put the convention through additional ballots.

Correction: The story originally stated that Jacob Frey did not attend protests at the 4th Precinct. Frey says he did attend.