It wasn’t going to become a fortress, exactly.

But records obtained by MinnPost from the City of Minneapolis last month — 16 months after they were first requested — show that elected officials intended to substantially strengthen the police department’s Fourth Precinct, where a protest camp had sprung up in the wake of the shooting death of Jamar Clark by Minneapolis police on Nov. 15, 2015.

In a budget amendment that was crafted but never formally offered at the city council’s budget meeting on Dec. 9, 2015 — six days after the protest camp was broken up by police — $605,000 was requested for a series of security-related items, including more-formidable walls, “anti-climb” fences, bullet-resistant windows and front doors, new gates and additional cameras.

That’s according to a draft document for “Fourth Precinct Security Improvements” prepared by the city’s finance and property services department for an emergency meeting called by Mayor Betsy Hodges on Dec. 8, 2015 — the day before the budget request was supposed to go before the city council.

The security measures do not appear to have been requested by the police department brass. Instead, the budget language was prepared via email conversations between Hodges’ staff, some council members, the city clerk and the civilian budget analyst for the police department.

According to the documents released to MinnPost last month, the budget language directed city police and property services staff to report back to the council on a plan to “restore the windows, gates, lighting, and cameras at the Fourth Precinct to the standard service levels for Minneapolis Police Department precinct facilities.”

“The goal of this reporting process is to ensure that the facility is made as welcoming as possible to the community while also ensuring the safety of employees and the public,” one staff direction said.

A spreadsheet prepared for Hodges’ Dec. 8 meeting contains the specific projects that were to be funded with the budget amendment. It estimated that the cost of a new front fence at $125,000. A 10-foot “anti-climb” rear fence was estimated to cost $115,000. The list also included $20,000 for a rolling gate plus $110,000 for “gate operators.” Lighting and electrical upgrades were to cost $35,000 with bullet-resistant glass for first-floor windows costing $120,000 and the same glass on the second floor costing $75,000.

The total for those projects is $600,000, $5,000 less than what Hodges and Council Member Blong Yang, chair of the council’s public safety, civil rights and emergency management committee, were planning to ask for at the budget meeting the next day.

The draft spreadsheet does not mention landscaping, though it does it include a line item that did not make it in the budget discussion: $185,000 for “Kevlar wall protection first floor,” which consist of panels added to the interior that, like bullet-resistant vests, use layers of fibers and resin to absorb the energy of bullets and prevent them passing through.

The city and the police department had been reporting damage to the Fourth Precinct building and equipment since shortly after protesters began occupying the area around the building on Nov. 15, 2015, hours after Clark had been shot and killed by a Minneapolis police officer.

Nearly every day brought reports of some damage, including the destruction of a pole-mounted camera, broken windows and damage to more squad cars. At a press briefing on Nov. 19, Chief Janee Harteau estimated the cost of the damage at $38,000.

That estimate proved low. “The cost of repairs — including replacing windows, tires, fences, cruisers, and cameras that had been damaged or destroyed — totaled more than $59,000, which was slightly higher than the figure the chief mentioned in a Nov. 19 press conference while the occupation was still ongoing,” noted a March 2017 “after-action assessment” of the MPD’s response to the protests conducted by U.S. Department of Justice. 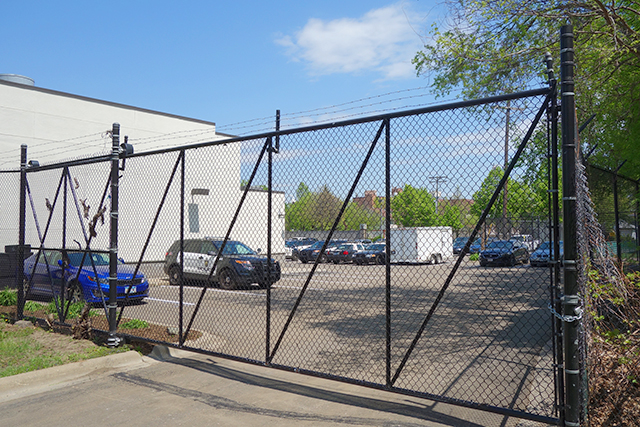 Some $50,000 worth of work repairing damages that resulted from the occupation was completed in late 2015, but the long-term improvements to the station were not done, Arradondo said last week.

Despite not completing the long-term security improvements, Arradondo said police administration currently feels the precinct building is safe. “The Fourth Precinct of all the five precincts is the oldest and it terms of upgrades had the least upgrades,” he said.

“It is not up to the level of the other precincts. However, yes, we feel that it at the level it needs to be right now. We will continue to look at what we can do to get upgrades to that precinct. But we’re comfortable with where we’re at right now.”

It appears one long-term safety improvement was completed. The city council accepted a donation from C-Bond and Sun Control of Minnesota last year to install security film on windows at the precinct. According to the council resolution, the film “is designed to help hold glass fragments in place if windows are broken.”

Work on the budget amendment began with an e-mail sent by Hodges to city and police department budget staff, police brass and her own senior staff on the morning of Dec. 8, five days after the occupation ended and one day before the budget meeting was to take place, according to a batch of documents released by the city in June 2016. “No later than this afternoon we will need to nail down proposed MPD improvements,” Hodges wrote.

For that meeting, Hodges wrote that the group needed “to enumerate the damages to the 4th precinct and proposed improvements and then make sure council members are briefed today and tomorrow morning, so there is urgency.”

A day later, Hodges’ office issued a midafternoon press release saying she would ask the city council to amend the budget to provide money for the Fourth Precinct at a meeting that evening. The statement said the amendment would be offered by Yang, and “proposes $605,000 in one-time spending for safety and accessibility improvements at the 4th precinct to better serve officers and the community.”

The response was swift. For the meeting that night, protesters filled the council chambers — some alerted by social media notices under the hashtag #BlongNBetsysFortess — to object to the amendment.

After a recess, the council debated other amendments, but the Fourth Precinct money was never requested. Only when the budget was finally adopted did protesters realize that they had prevailed in stopping the funding.

Afterward, Hodges wouldn’t say what the money was to have paid for. That’s why MinnPost asked for documents related to the request, to answer a simple question: Was the 4th Precinct really going to become a fortress in the midst of north Minneapolis?

It took 16 months for the city to fully respond.

MinnPost’s initial Data Practices Act request was sent to Hodges’ then-press secretary Alexandra Fetissoff on Dec. 22, 2015. It asked for data beginning Nov. 15 that related to the protests at the precinct house, any damages to the facility and the city’s response to physical problems with the precinct. It also asked for records related to the mayor’s and/or the police chief’s requests to the city council related to what the press release had described as “safety and accessibility improvements.”

Fetissoff, who had been a contract employee filling in during the maternity leave of Hodges’ communications director, left Hodges’ administration in early February. On March 18, MinnPost wrote to Hodges’ new press secretary, David Prestwood, asking for an update on the DPA request. A second email was sent on May 4.

According to Assistant City Clerk Christian Rummelhoff, who looked into why it had taken so long to fulfill the MinnPost request, only then was a formal process begun to seek the requested records.

In June of 2016, the police department began the search of its records and Prestwood released documents he said completed the search of the mayor’s office. A police records office staffer then asked MinnPost to provide search terms that would be used by city information technology staff to search through emails and other electronic records.

In both July and August, the records unit said they had found responsive records and they had been submitted to other city staffers for redaction, the process by which records are examined for non-disclosable information based on exemptions in state law.

Finally, on October 18, 2016, the records unit sent the first documents based on the search, including some daily incidence reports from commanders at the 4th Precinct. The bulk of the records, however, had not been produced.

After several more requests, the records unit admitted that it had failed to follow up on a question asked by IT staff so the search had not been started. Only then did IT begin to conduct was is referred to an “email pull.” On Dec. 9, police records staff told MinnPost that the pull had been completed and were being reviewed for potential redactions.

Without receiving any further documents, MinnPost asked Hodges about the request during a March 20 press conference, which had been called to discuss the federal Community Oriented Policing after-action report. At the time, Hodges apologized for the delay.

That afternoon, the first of two thumb drives containing several thousand pages of documents was released. The second thumb drive was released three days later, bringing the total number of pages to 4,600. But the records released did not have records specific to the budget request and needed improvements at the 4th precinct.

Only after MinnPost objected to a statement by the police records unit that it considered the DPA request to have been fully met did the city clerk’s office get involved. Within three weeks, the additional emails between the mayor’s staff, budget staff and council members were released as well as the spreadsheet outlining the estimated costs to fortify the precinct.

Rummelhoff said these emails were located in digital files of city council members, not the mayor’s office. He said they might not have turned up in the mayor’s office search due to a five-month lag between when the DPA request was submitted and when mayor’s office staff actually initiated the formal process. In that gap, the emails may have been deleted from mayor’s staff files, he said.

Rummelhoff said his review of the city’s response identified several gaps. The first came when Fetissoff failed to process the initial request. The second came when the police records unit did not respond to a question from the city’s IT department and the request languished until MinnPost prodded the city.

Finally, during April 17 special address titled, “One Minneapolis in the Time of Trump,” Hodges again apologized and pledged that the city would become more transparent.

Hodges said she was creating a work group including the city coordinator, city attorney, city clerk and communications director, council vice president Elizabeth Glidden and Council Member Andrew Johnson to review how the city can be more responsive to requests for information from reporters and the public.

“I am taking these steps so that we can do better,” Hodges said.