In Minnesota, when something is described as “different,” that’s usually a bad omen.

That’s what happened this week, after DFL Gov. Mark Dayton presented an offer to the Republicans who control the Minnesota Legislature in an attempt to wrap up the state’s $46 billion two-year budget.

The offer, as presented by the governor, was a “meet halfway” solution that proposed to split the state’s $1.5 billion remaining budget surplus between the two sides’ competing priorities. Republicans would get roughly $700 million to spend on their top goals — new transportation funding and tax cuts — while the governor would get the rest to spend on things like state programs, health and human services and new education funding.

Republican House Speaker Kurt Daudt and Senate Majority Leader Paul Gazelka called it a “departure” from what they’d been talking about all along, which involved taking each budget area piece-by-piece and trying to work out a global deal. “We’re not sure yet,” Daudt said after receiving the offer. “It’s different.”

By later that evening, it became clear that “different” meant “bad.” Talks between the governor and Republicans quickly went sour, creating an impasse between the two parties that’s shown only little movement since then.

And though the two sides met again Friday morning, with just four days left until the Legislature is required to adjourn and plenty of logistical hurdles left, they will have to work overtime in order to preserve any hope of getting a deal done in time.

“Our budgets and our ideas represent where Minnesotans are at,” Daudt said. “They want to see tax relief, they want to see money spent on roads and bridges, and we are going to continue to advocate for those things very strongly.”

“If they want to have an agreement and a budget and they want to be reasonable about it, then we’ll meet them halfway,” Dayton countered. “If not, then they won’t finish on time and it will be their responsibility.”

Halfway or no way?

At the heart of the current disagreement is a seemingly straightforward issue: What constitutes a halfway point when it comes to the state’s budget surplus?

When legislators started drafting their budget plans, the state’s budget surplus sat at about $1.65 billion. But when lawmakers passed a reinsurance bill earlier this session, which aims to shield health insurance companies from some of the risk involved in paying for medical care, it took a $142 million bite out of the surplus.

That left about $1.5 billion in the surplus when lawmakers began to craft the state’s two-year state budget.

Under Dayton’s plan, $83 million of that money would go to the state’s courts and public safety budget, $45 million for state government cybersecurity measures on state systems and $10 million should be left unspent. The remaining $1.36 billion, according to Dayton, is what he and Republican legislators should split for their respective priorities.

“The governor believed these two responsibilities, the courts and cyber security, are really shared responsibilities by both the Legislature and the governor to fully fund,” said Myron Frans, Dayton’s top budget commissioner, who briefed reporters Thursday about the governor’s latest offer. 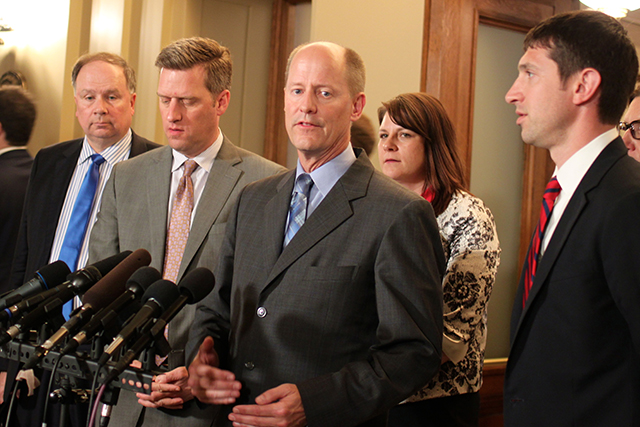 That plan would give $682 million for the Legislature to spend on taxes and transportation, Frans said, with the expectation that they might want to put more toward one area than the other. “We made an offer to meet halfway and we haven’t been met halfway,” he added. “That’s why we’re at an impasse right now.”

A messy ending ahead

The impasse is reminiscent of what happened in 2011, the last time Dayton and a Republican-controlled Legislature faced off to pass a two-year state budget. Back then, Dayton also offered in early May to meet legislators halfway on taxes and spending cuts. His proposal included postponing the repayment of $1.8 billion that Minnesota owes local school districts, covering the rest with $1.7 billion in spending cuts and $1.7 billion in additional tax revenues.

That offer went nowhere with Republicans because it included tax increases on the state’s wealthiest residents, and the rest is history: The gridlock stretched past the deadline to adjourn and into a 20-day government shutdown, the longest in state history.

Back then, legislators had a $5 billion budget deficit to close. Dealing with a budget surplus this year, some at the Capitol thought legislators might be able to cut a deal in time for an orderly finish to the session. Now some are expecting a budget outcome closer to what happened in 2015, when Dayton and a divided Legislature deadlocked until the final weekend of the session, and the House and Senate went ahead with a budget deal they agreed on without Dayton.

That plan still led to a messy, one-day special session that nearly derailed over disagreements on environmental spending. If legislators don’t find an agreement by midnight on Monday, Dayton can call them back for a special session to finish budget work. But an agreement must be passed by the start of the next fiscal year on July 1, or state government goes into shutdown mode.

By Friday, lawmakers were in and out of meetings again, but with little to report. House Speaker Kurt Daudt said they were reviewing the situation and could meet with the governor again later on Friday. “We’ve entered the cone of silence,” he said.