It took a while — and it won’t accomplish all that the DFL probably hoped for in an endorsement — but Ward 9 incumbent Minneapolis City Council Member Alondra Cano received her party’s support for re-election.

In fact, it took four ballots and the walkout of her chief rival and his delegates at the ward convention Saturday before Cano could give a fiery acceptance speech.

“This campaign is not about me,” Cano said in the auditorium at South High School. “It is about the thousands of workers and families that we are helping by advancing the $15 minimum wage unapologetically.”

Cano said she would call on her supporters again over the summer “as we seek to unify our ward” to solve racial inequity and “lead the resistance across the nation.”

But it wasn’t a unified ward that was on display just a few minutes earlier. As the votes were being counted on the fourth ballot, challenger Mohamed Farah led his delegates in a walkout, saying the convention was biased. In each of the first three votes, Cano had come within a handful of votes to reach the 60 percent needed, though Farah had been successful in blocking her from reaching the official threshold for endorsement. By the time the fourth ballot was announced, she was just two delegates shy, with 18 delegates having voted for neither Cano or Farah.

After Farah and his delegates left the room, Cano’s supporters suspended the rules to allow the remaining delegates to endorse her by voice vote. That they did, and the convention adjourned.

Farah’s call for a walkout appeared to have the support of the third candidate seeking the DFL endorsement, former Ward 9 Council Member Gary Schiff. When Farah first spoke about the bias at the convention, it was with Schiff at his side. And another motion by Farah’s to adjourn without an endorsement was seconded by Schiff.

On Sunday, Farah said will run for the office regardless of the outcome of the convention and that he’ll be challenging the ward convention results with DFL officials.

The convention didn’t start off so contentious. For the first several hours Saturday, the rancor that had been evident in the ward’s March precinct caucuses wasn’t apparent, at least not on the surface.

Following the precinct gatherings in March, all three candidates filed official challenges with the Minneapolis DFL, complaining of delegates who were not properly elected, and the ward credentials committee — made up of three members from each of the three campaigns — worked through 33 challenges. All were resolved unanimously.

At the ward convention, though, tensions began to rise during the debate over adjournment. Convention officers struggled to keep nondelegates from entering the floor. And though no serious disruptions occurred, the incident was not without casualties: A sergeant at arms brought in by the party from Duluth lost a tooth during one scrum of pushing and shoving. 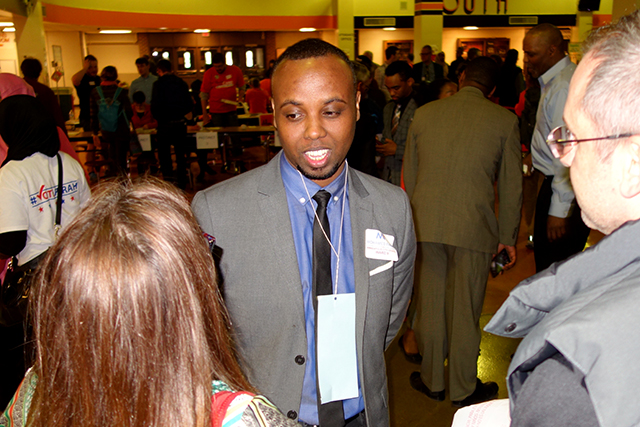 MinnPost photo by Peter Callaghan
As the votes were being counted on the fourth ballot, challenger Mohamed Farah led his delegates in a walkout, saying the convention was biased.

At issue was a party rule that prevents adjournment until 3 p.m. or until at least four ballots had been taken — whichever happened first. Some delegates interpreted that as a requirement that the meeting adjourn when either of these thresholds was reached, not simply that it could be adjourned once one of those things happened.

“We are so close to an endorsement,” said delegate Aisha Gomez, who is also Cano’s council aide at City Hall. Endorsing a candidate “would make the DFL relevant, which frankly it isn’t in other wards around the city.”

Another Cano delegate said the endorsement would free her supporters up to fan out across the city to work against other candidates who weren’t supportive enough of progressive issues.

But Farah delegates said that the three ballots showed there wasn’t a 60 percent majority, and that not adjourning was akin to holding delegates hostage. “We have three viable candidates,” said Farah delegate Rand Retterath. “We can all go home and do what we can to make sure our candidate wins.”

Cano had the most support among the 276 delegates, taking 57.09 percent of the first ballot. The second ballot count was nearly identical to the first. Schiff lost six votes, Cano lost one and Farah gained two while “no endorsement” gained three. But on the third ballot, Cano gained two delegates, and on the fourth, she gained four more. Then came the walkout.

No endorsement would have been a victory for Farah — as it has been in some other wards where incumbents have been blocked from getting the imprimatur of the party. But the other council members who have either lost the DFL endorsement — or suffered a non-endorsement —  faced challenges from their left, from activists either connected to Black Lives Matter or the Bernie Sanders presidential campaign.

Cano, however, is well connected to both camps. She has been endorsed by Our Revolution, the political organization that spun off from the Sanders campaign; and she was one of the most visible council members at the 4th Precinct occupation in 2015 after the shooting death of Jamar Clark by a Minneapolis police officer. 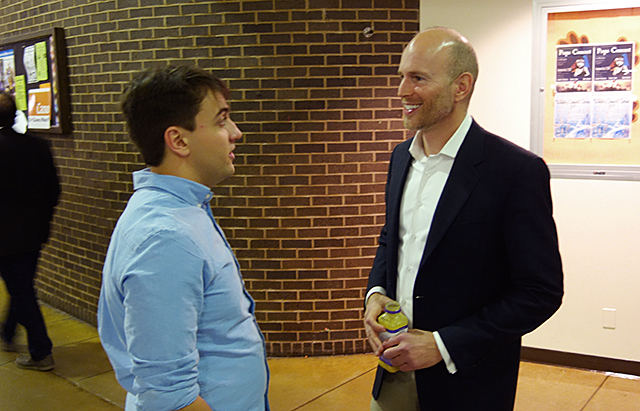 MinnPost photo by Peter Callaghan
Farah’s call for a walkout appeared to have the support of the third candidate seeking the DFL endorsement, former Ward 9 Council Member Gary Schiff, right.

Farah, however, is challenging Cano because he says she doesn’t represent everyone in the ward, especially those who have disagreed with her. On Saturday, he repeated the charge that there have been attempts to keep some people, including Somali voters, from fully participating in the process. “I came into the DFL party thinking everybody had a chance,” Farah said during the lunch recess. “If you are a citizen then you should be able to make a vote and be a delegate. But I have been experiencing many instances where voters are being suppressed just because they disagree with a candidate.”

Those same themes were repeated later as he led the walkout. Farah, the executive director of Ka Joog, which offers outreach and services to Somali-American youth and families, said he will take his campaign to the November election despite not getting the endorsement.