That used to be a common description for most endorsement processes involving Somali-American politicians running for political seats in Minneapolis.

But on Saturday, when City Council Member Abdi Warsame won the DFL endorsement in his bid for re-election in Ward 6, participants and observers at the convention — which drew more than 250 people to Northeast Middle School — were using different terms to talk about the event.

Minneapolis DFL Chair Dan McConnell, who ran the convention, described it as a “good event.” For Warsame, it was “beautiful.” And for other convention-goers, it was “peaceful” and “drama-free” — the “best” such event the Somali-dominated 6th Ward has seen in many years.

The convention was also shorter and less tense than previous events that drew high numbers of Somali-American voters.

So what was different?

Mohamud Noor, Warsame’s chief opponent, didn’t show up — which meant his loyal supporters also stayed away. That decision, which Noor announced a day before the event, came as a surprise to many who have been closely watching the contentious race, which has become personal for both the candidates and their supporters.

And now, people are taking issues with some of the words Noor used in his announcement to drop out of the DFL endorsing convention process — which he called a “potential safety risk for participants.”

In the pouring rain on Saturday morning, Warsame’s campaign volunteers deployed hundreds of supporters and delegates — most of them older men and women — in SUVs and Toyota Camrys to Northeast Middle School.

By 9:30 a.m., hours before the scheduled start-time of the endorsement process, they packed the cafeteria as they talked about Noor’s absence over breakfast.

Kadir Abulle, a Warsame volunteer who wore one of the campaign’s neon green T-shirts, seemed mystified about Noor’s statement — which he said was an insult to the community that supported him in previous elections. “It’s unfortunate that Noor made that statement and I was so surprised,” Abdulle said. “Now, he lost the confidence of our community.”

Warsame, not surprisingly, also took a shot at his opponent for making remarks that he said tarnish the Somali-American community’s already tainted reputation, given recent reports of intimidation at caucus events and voting booths. 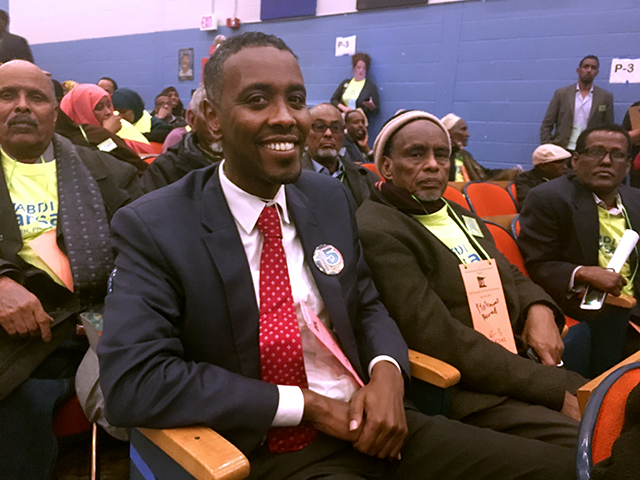 MinnPost photo by Peter Callaghan
Abdi Warsame: “It’s very unfortunate that an individual like our opponent would throw his whole community under the bus … because of his own personal ambitions.”

“When [they’re] losing, people make outlandish statements,” Warsame said in an interview with MinnPost. “It’s very unfortunate that an individual like our opponent would throw his whole community under the bus … because of his own personal ambitions.”

In an impassioned speech at the convention, Warsame alluded to Noor’s announcement that raised concerns about potential violence among the supporters of the two candidates. “They said there will be a fight if they come,” Warsame said in Somali to the crowd of supporters, who erupted in cheers throughout his speech. “Do you see people fighting here?”

‘There would have been a fight’

Noor doesn’t talk about the Saturday convention without talking about the results of the April 4 precinct caucus at Brian Coyle Center, where hundreds of people crammed into the gymnasium — and where the fire department eventually relocated the process outside for safety reasons.

Because the caucus was disorganized and chaotic, Noor says, there was no registration from some of the precincts in Ward 6. Therefore, there were no delegate credentials from the caucus. 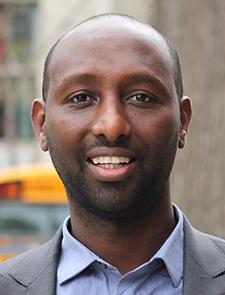 “We challenge the whole process,” said Noor, speaking about one of the reasons he dropped out of the DFL nomination. “The precondition of having a convention is to have a proper caucus, where people are elected based on the bylaws and the constitution of the DFL. If that is not met, then it invalidates the list of names of the individuals who are delegates.”

Another reason Noor stayed out of the convention, he said, was to protect not only the safety of the participants but also the “dignity” of the Somali-American residents in the Ward, a community that has often fallen prey to anti-immigrant and anti-Muslim bloggers.

“The recipe of failure is to have people who are going to be in loggerheads and then blame the Somali community,” he said. “I will not take that blame. I have to protect the dignity of the community.”

It was all rather anti-climactic after the lead-up. After the chaotic April 4 precinct caucus night, which led to protests over the arrangements and the fairness of the count, the Minneapolis DFL struggled to resolve ongoing challenges and the ward convention was postponed — twice — over concerns about the safety and security of the proceedings.

The event was finally scheduled for Saturday at a site outside the ward. Even then, the party brought in lots of volunteers to help run the sign-in and hired private security to keep order.

By the time the event actually happened, though, Noor had announced that he wouldn’t take part. That left the room to Warsame. After a photo of the convention floor was tweeted, state Rep. Ilhan Omar, a Noor supporter, questioned whether it represented the ward.

Interesting room, doesn’t look representative of ward 6 at all. So much for inclusive democracy. #mpls2017 https://t.co/mPUE1FJv8U

Omar had also been one of the signatories to an online petition calling for the Ward 6 convention planning committee to cancel the event.

“We cannot in good faith ask our neighbors in Ward 6 to participate in a convention that ignores and minimizes the mistakes made on and leading up to April 4th,” the petition stated. “The problems of April 4th are not easy fixes, and based on the events of that day, we cannot ensure the resources exist for a safe and orderly convention setting.”

The Minneapolis DFL had its own misgivings about the convention. McDonnell told delegates the credentials committee reviewed and rejected nearly all of the delegate challenges. It did however, send one challenge to the convention floor with a positive recommendation. That challenge, from Noor himself, asked that the delegation from precinct 6-3 not be seated, that the convention not endorse in the Ward 6 city council race, and the convention itself be canceled.

McConnell noted that the request to cancel the event ran counter to DFL rules. But he said an examination of the caucus night events left the party less than confident that support for the candidates, especially Noor, was accurate.

But with mostly Warsame delegates voting, all of the challenges were rejected, the delegates from precinct 6-3 were seated and the convention proceeded as something akin to a Warsame rally.

At one point, a motion was made to endorse the incumbent by acclamation: that is, by delegates raising their credentials rather than conducting a time-consuming paper ballot. But the Warsame campaign wanted an official paper ballot vote to head off further challenges of the convention’s legitimacy. The convention also decided not to waive a question-and-answer period for candidates, even though Warsame was the only candidate in the auditorium.

That left Warsame open to a question from a delegate who said she was a lesbian and recalled that in 2013, when he first ran, he said he opposed same-sex marriage.

When the vote was finally announced, there were 244 votes for Warsame, 11 for Noor and none for a third candidate, Tiffini Flynn Forslund.