Across many industries, from automaking to food processing, the United States and Mexico enjoy a closely intertwined, friendly trade relationship, thanks to the North American Free Trade Agreement.

When it comes to the sugar trade under NAFTA, though, ties between the U.S. and Mexico are anything but sweet. For years, the U.S. sugar industry has worked hard to limit how much sugar Mexico, the world’s sixth-largest sugar producer, can send to the north. Mexico, constantly looking for places to sell excess product, has sought ways around existing trade law to get its cane sugar sold on the U.S. market.

President Donald Trump has vowed to protect U.S. industries, and opened up renegotiation of NAFTA with tough talk on Canadian and Mexican trade practices. Observers pointed to sugar as an especially contentious area where trade talks could go sour.

So eyebrows were raised on both sides of the border last week, when U.S. and Mexico negotiators reached a new deal to govern the flow of sugar between the two countries — with Mexico agreeing to major U.S. demands in exchange for a deal.

America’s major sugar-using businesses — beverage, candy, and food companies — howled at the deal, arguing it would raise prices for U.S. consumers. However, sugar growers, including in Minnesota, the country’s second-biggest sugar producer, were optimistic that the new agreement would help protect them from a major competitor.

To understand why this deal is happening in the first place, it’s important to understand how the U.S. governs its sugar industry. Washington carefully manages the sugar industry, and matches domestic sugar supply with domestic demand as closely as possible. But domestic sugar production is supplemented by allotted quotas for imports, so that the U.S. can fulfill its treaty obligations to trading partners like Brazil.

Mexico, however, presents a unique challenge to the U.S. sugar industry, which has been wary of its southern competitor. Mexico is home to a large, productive sugar industry that enjoys lower labor costs and is substantially supported by the Mexican government. It has long desired increased access to the U.S. market.

When NAFTA was made law in 1994, the pact’s provisions on sugar, which gave Mexico more access to the U.S. market, would not kick in for another 15 years. When they did set in, Mexico — which had greatly increased its capacity for sugar production since NAFTA’s signing — moved to export large quantities of sugar to the U.S., since its domestic demand was sufficiently met.

Foisting a subsidized product on a trading partner at a lower rate than their domestic product is known in the trade world as dumping. With sugar, the U.S. filed legal actions in international trade court disputing Mexican sugar trading practices, where judges found that Mexico had caused injury to the U.S. sugar industry.

Around 2013, a glut of Mexican sugar on the market, combined with high U.S. sugar production, lowered the price of sugar so much that it fell below the sugar program’s price floor, triggering the USDA’s safety net and prompting fresh negotiations with Mexico.

The agreement reached last week in Washington, led by Commerce Secretary Wilbur Ross and his Mexican counterpart, Ildefonso Guajardo Villareal, updates a 2014 understanding between the two countries on sugar.

It’s a complicated agreement with a lot of components, but there are a few that are drawing the most attention. The first is its adjustment of the proportions of raw sugar and refined sugar that Mexico can ship north. The U.S. likes receiving more raw sugar, so that refineries stateside stay humming with product to process; refined sugar imports are seen as cutting into the domestic industry’s business.

Previously, raw sugar accounted for a little less than half of the total sugar coming from Mexico. The new agreement brings raw sugar’s share up to 70 percent, and takes refined sugar’s share down to 30 percent — a significant concession by Mexican negotiators. 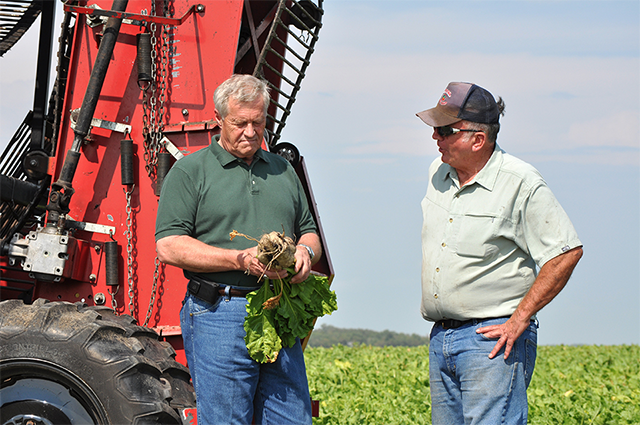 Mexico did score a win on a provision in the deal that effectively gives it the right of first refusal among U.S. trading partners to make up for U.S. sugar supply shortfalls with its own product.

In another win for U.S. sugar growers, the deal includes a provision that gives the USDA more authority to dictate the specific types of sugar that Mexico is allowed to sell to the U.S.

Previously, domestic producers had been concerned that Mexico was exporting a semi-refined sugar to the U.S. as part of its “raw” quota. That semi-refined sugar could be used directly by food manufacturers without any further processing by sugar refiners. Domestic sugar producers saw this as both cutting out the U.S.-based refiners and taking away market share for U.S.-made refined sugar.

The new agreement gives the USDA more control over sugar’s so called “polarity” level — an industry measurement that indicates how refined sugar is — in order to crack down on Mexico shipping up semi-refined sugar to the U.S. as raw sugar.

Overall, the U.S. got nearly all of what it wanted in the deal, and Mexico avoided getting hit with up to an 80 percent increase in tariffs and duties on its sugar, which Ross threatened to implement if a deal were not reached.

Within the sugar industry, the new deal is the biggest winner for refiners, who stand to see increased business with more raw Mexican cane sugar coming through their mills.

According to David Bieging, who represents the Southern Minnesota Beet Sugar Cooperative in Washington, the agreement is good news for Minnesota’s beet farmers. (The Southern Minn Coop is one of the state’s largest, with over 500 member farmers producing 3 million tons of sugar beets annually.)

“Assuming the U.S. can enforce this and/or assuming Mexican imports do not continue to violate the suspension agreements, these contain what should be significant improvements,” he told MinnPost. They would make it less likely, he said, that the U.S. sugar industry would suffer injury from the dumping of Mexican sugar stateside.

Rep. Collin Peterson, the top Democrat on the House agriculture panel whose 7th District is home to most of Minnesota’s sugar industry, said the deal was a “mixed bag” and “could have been better.”

He continues to be concerned about loopholes, or ways that Mexico could get around the terms of the agreement to send cheaper sugar to the U.S., as it has done since 2008. “It depends now on how the administration administers the agreement,” Peterson said.

Measures to combat these trading practices are good for the entire U.S. sugar industry, from Minnesota beet farmers to Florida cane growers.

According to Skip Taylor, an agricultural economist at North Dakota State University, the region’s industry, centered in the Red River Valley of Minnesota and North Dakota, may only see marginal gains thanks to the agreement, relative to other segments of the domestic industry.

“Here in the Valley, our sugar is all refined,” Taylor says. “It doesn’t have that direct impact on the Valley in sum, besides a two-cent bump in the price, which is marginal. I don’t think some of the grower groups are really excited about this.”

Sugar advocates said that consumers would experience a marginal increase in prices. “It’s very small in the context of food at the grocery store, it’s very small,” Bieging said.

‘The worst form of crony capitalism’

For the companies that buy sugar and put it into food and beverages, however, the U.S.-Mexico deal was met with intense criticism.

The Coalition for Sugar Reform, an organization representing a group of interests opposed to the government’s support for the sugar industry, called the agreement a “bad deal for hardworking Americans” and claiming it amounted to a $1 billion tax on sugar consumers.

It “exemplifies the worst form of crony capitalism,” the group said, adding that the deal should be a wake-up call for Congress as it considers farm commodity programs in the 2018 Farm Bill. (The International Dairy Foods Association, which includes Minnesota companies Dairy Queen, Dean Foods, and Talenti Gelato, is a member of the Coalition for Sugar Reform.)

Taylor said that the idea of a billion-dollar tax is “stretching it,” explaining that the increase amounted to, on average, a $1.40 increase the price of sugar per year. “That’s why the American people don’t care,” he said.

Major Minnesota agribusiness and food companies, which would be hit with higher prices, largely did not comment, or focused on the bigger picture of NAFTA renegotiation.

In a statement, Cargill said the agreement is “consistent with the Trump Administration’s stated commitment to U.S. workers and growing the economy… [it] also maintains a strong and productive trade relationship with Mexico, which is vital to successfully modernize NAFTA.” (A top Minnesota sugar user, General Mills, declined to comment on the agreement.)

Implications for NAFTA, and the sugar industry

Broadly, the sugar agreement was hailed as a promising sign that, despite the heated rhetoric on both sides of the border, the U.S. and Mexico can successfully negotiate on contentious issues.

The U.S. Department of Commerce is scheduled to sign the agreement at the end of June, pending a two-week period of public comment from interested parties.

If it becomes official, as is expected, the deal avoids a potential trade war: If it got hit with 80 percent duties on sugar, Mexico signaled it would place a counterduty on American-made high fructose corn syrup, which has largely replaced cane sugar as the sweetener for Mexican soft drinks. (The U.S. corn industry let out a big sigh of relief when the sugar deal was announced.)

“I think this agreement can be described as trying to make the sugar program work in a North American market,” said Bieging, the lobbyist for Southern Minnesota Beet Sugar. “It works within the U.S. but when NAFTA took effect, it really tore a hole in the safety net for our farmers. So this is an attempt to shore up that end of the program if Mexico wants to be in.”

In an editorial on the agreement, the Washington Post said it was good news because it averted a trade war, and preserved a “modicum of good relations” leading into NAFTA renegotiation, but framed it as a “major concession by Mexico for the sake of good bilateral relations.” The editorial did say the deal was bad news because it entrenches the federal commodity program for sugar, which the page argued is bad for U.S. consumers.

According to Bob Kudrle, a trade expert at the University of Minnesota and a critic of the sugar program, the U.S., owing to its size and economic power, simply has more leverage over its NAFTA partners, who benefit greatly from U.S. involvement.

“The Canadians and the Mexicans are anxious to placate the Americans,” Kudrle said. “It’s not surprising that they’ve been accommodating.”

He suggested that Ross and the Trump administration were looking for a protectionist victory to open up NAFTA negotiations, and that Mexico acquiesced. “There are many constructive things about NAFTA that could be clarified — labor regulations, the environment, clarification of digital commerce — that’s very far away from what Trump talked about when he talked about NAFTA.”

Powerful sugar interests in Minnesota and the U.S., however, find this move constructive. They had been concerned that Trump, an unpredictable actor without a long record on agriculture policy, could fall under the sway of conservative advisers looking to take a cleaver to Uncle Sam’s protection of sugar and other agricultural commodities.

To sugar’s advocates, this agreement is a cautious indication the administration is in their corner as Congress begins re-examining the sugar program in the new farm bill, which lawmakers have begun the process of drafting for an expected passage next year.

Rep. Peterson says the administration claims it wants to preserve the sugar program. “But I wonder,” he said. “We’ll find out.”