Somewhere in the closing days of the 2017 session of the Minnesota Legislature, a mandatory study of the impacts of light rail construction on a condominium building adjacent to the tracks became something, well, much less.

Offered by DFL Rep. Frank Hornstein and DFL Sen. Scott Dibble, the language was included in the state transporation budget and came at the request of owners of the Calhoun Isles condos — the converted grain silo at the junction of the Kenilworth Trail and the Cedar Lake LRT Regional Trail/Midtown Greenway in Minneapolis’ Cedar-Isles-Dean neighborhood.  That location also puts the building in very close proximity to where the Metropolitan Council wants build a tunnel for the Southwest LRT project.

The Dibble-Hornstein language would have required the Met Council to hire an engineering firm selected by the condo owners within 21 days of the bill’s signing to “evaluate the susceptibility of the Calhoun Isles property to vibration during construction and during operations of a light rail train.”

Under the language, the Met Council would also have to take steps to protect the property from “vibratory damage.” The cost of the study, estimated by the homeowners association at $50,000, would have been borne by the Met Council.

It was. According to bill language negotiated by the Met Council, the agency is now only responsible for crafting a “vibration management plan” that would limit vibration to levels allowed by Federal Transit Administration rules. The plan must include an inspection of the building before and after construction of the tunnel; vibration monitoring throughout the project; and efforts to reduce vibration impacts.

Under the new language, the Met Council also must “make reasonable efforts to coordinate and cooperate with owners of the condos and set up a “fair and objective” process for responding to damage claims. In signing the final transportation budget, Dayton wrote: “I am pleased that this bill removed the policy provisions included in the vetoed bill that obstructed transit development.”

Kate Brickman, spokeswoman for the Met Council, and Chair Adam Duininck said the council asked that the language be changed, saying the study was something it was already doing. “As part of the process with the federal government, you do estimations and mitigations ahead of time,” she said. “Once the project is being built, you do tests to see if the estimates were right.” 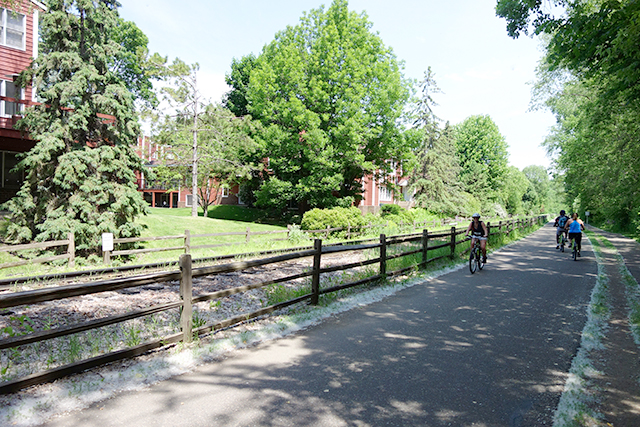 MinnPost photo by Peter Callaghan
Kenilworth Trail looking north with the Cedar Lake Shores townhouses to the left and Calhoun Isles condos to the right.

She compared it to similar mitigations plans on the Central Corridor that paid special attention to the University of Minnesota, MPR and KSTP. (MPR’s concerns over vibration led it to sue the Met Council. An agreement was reached after the Green Line was up and running.) “The new language in the bill is confirming that we do this as part of the federal process and it’s not being done by a firm chosen by Calhoun Isles,” Brickman said.

The current impact studies and mitigation plans, Brickman said, were approved by the FTA when the agency signed off on the Environmental Impact Statement for the project in July 2016.

Hornstein said he was disappointed that the original language was dropped and that he and Dibble had to scramble to get something positive for residents in the final version of the bill. “We have been working with the residents and share their concerns,” he said.

Given that the tunnel is being built so close to the foundations of the condo building and  that it has a unique construction history, Hornstein said it is worth getting a second opinion on the potential impacts. “This is still a very serious issue and the Met Council hasn’t addressed it to my liking,” he said. 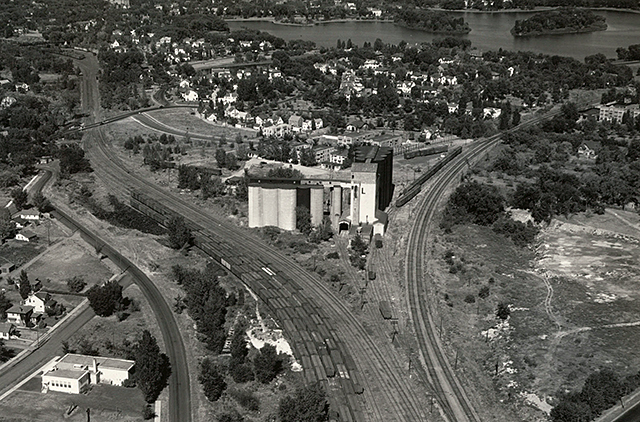 Minneapolis Public Schools
An aerial photo from a series taken by Joe Quigley between 1928 and 1932 for the Minneapolis School Board. The McKenzie-Hague grain silos are in the center with Lake of the Isles in the background.

But the final language “was the best we could do to draw attention to the issue,” he said. “At least the owners get a seat at the table.” Hornstein also said he disagreed with a Met Council claim that his language would have reopened the entire environmental review of the project.

The Calhoun Isles condos are an adaptive reuse of the McKenzie-Hauge grain elevators that were built between 1915 and 1928, according to architectural historian Larry Millett. The conversion included cutting window and balcony openings into the concrete silos between 1982 and 1985.

The condo association hired Itasca Consulting Group last spring to give an opinion on how the vibrations the Met Council expects during construction would impact the main condo tower. Itasca disagreed with the council’s determination on the building’s sensitivity to vibration, arguing that the structure is very sensitive to potential movement, and recommended a full susceptibility study be done to resolve the issue.

In a letter to Dayton, condo association board president Nicholas Shuraleff wrote that the building was damaged in 2015 by vibration from construction of an apartment building on nearby West Lake Street. Shuraleff also wrote that if vibration exceeds what the building can tolerate during light rail construction, it could halt the project and require a rethinking of the tunneling plan. “In essence, it appears to us that the Met Council is willing to use Calhoun Isles (as) a guinea pig,” he wrote. “The consequences for us could be very serious.” 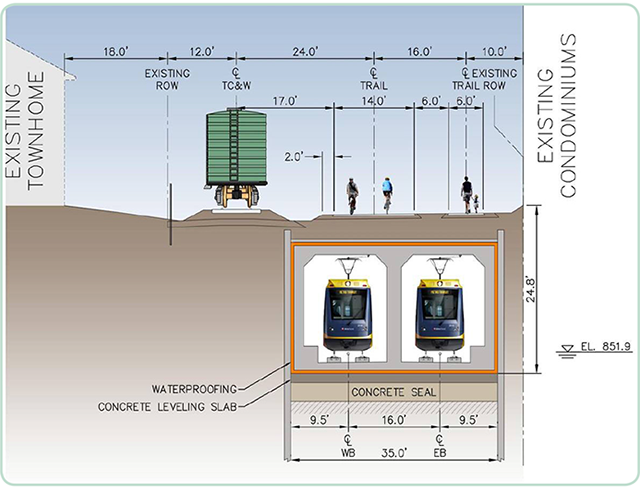 Metropolitan Council
Cross-sectional view of the proposed Kenilworth Corridor light rail tunnel, near the southern end of the tunnel.

The project proposes to use a cut-and-cover method for the tunnel: that is, digging a trench, shoring up the sides and building a tunnel within. Met Council project staff have said the piles will be driven by hydraulic pressing which produces less vibration than other methods. Once completed, the tunnel would be covered and landscaped. In the final EIS, the council staff wrote that it tested the current noise and vibration levels at various points on the 14.5 mile line between Target Field Station and Eden Prairie.

The EIS notes that short-term impacts are those that will happen during construction through the use of jackhammers, rock drills and pile-drivers. Long-term impacts are those caused by operations of light rail and freight trains. The EIS said that a vibration mitigation plan would include additional testing and the identification of short-term and long-term mitigation measures.

Bad vibrations: How a fight between the Met Council and a Minneapolis condo association spilled into the state Legislature