“Crossroads” was the name of a large, almost-50-year-old apartment complex in Richfield that, in 2015, was purchased, renamed and “upscaled” to bring in higher rents in a tight market.

Now, a documentary put together by TPT Minnesota and the Minnesota Housing Partnership is using the stories of the displaced tenants to examine the broader problem of affordable housing supply in the Twin Cities. The documentary, “Sold Out: Affordable Housing at Risk,” debuts Sunday.

At the heart of the story are economic forces that have broad implications for the region. Apartment developers are chasing the higher end of the market, partly due to the high cost of construction in the area, and partly because high demand makes it especially profitable. At the same time, the public and nonprofit sectors are not building enough new units to meet current demand for affordable housing. That disconnect is made worse by the loss of buildings like Crossroads.

“In 2014, the region was able to build 770 new affordable units, using all of our resources and all of our efforts,” Tim Thompson, president of the Housing Justice Center, says in the documentary. “When the 700 units in Crossroads were converted, that in effect canceled out virtually all of that gain from that year’s worth of effort.”

Arthur estimated the ongoing loss of affordable units at 100 a week in the Twin Cities. Over the next two decades, he said, “We are facing the toughest, harshest housing problem for low-income people in this country,” since the Great Depression. “I don’t think there’s anything we can do to totally stop it, but we need to do all we can to mitigate it.”

A market that works — for some

Though the documentary is not especially friendly to building owners and developers — especially Crossroads developer Jim Soderberg — it does take time to explain the market forces that have led to the problem at lower-rent levels. Buildings are being sold not only because the market is hot and current owners can make a sizeable profit, but also because many of the properties are at an age when they require extensive and expensive renovations, says Bernadette Hornig of Hornig Cos, which owns apartment buildings.

“The reason they’re selling is [because owners] are actively choosing not to reinvest,” Hornig said. “Someone else needs to step in and be the steward of that building moving forward.”

Added Cecil Smith, chairman of the Minnesota Multi Housing Association: “We’re refreshing what’s in the market right now because there is the available capital to do that, there is available market opportunity to do that and it is good for the long-term health of the housing stock.”

The loss of Crossroads plays into the broader story of housing availability in the Twin Cities. But “Sold Out” also tells of the impact on individuals and families who were forced to leave. It wasn’t just the new owner’s decision to stop accepting Section 8 and other government rent-subsidy programs that caused displacement. The owner also increased rents dramatically and required all tenants to reapply under more-stringent qualifications. Higher credit scores were required as were higher income levels and caps on the number of tenants per bedroom.

One former Crossroad tenant, Bernard Campbell, said he was able to pay the increased rent by having his fiance move in to share the rent. But they were still forced to leave because his credit score was beneath the new standard. “Between the both of us, we have four jobs — two apiece — and if that’s not enough, I don’t know what to say,” he says.

Another tenant who spoke anonymously said she and her husband had a baby after they moved in. That put them beyond the new cap of two persons in the one-bedroom unit.

The tenants organized and helped each other deal with the crisis. They also sought help from tenants activists HOMELine and the Housing Justice Center. In a still-pending federal class action suit, Thompson argues that the displacement violates the protections in the Fair Housing Act because the new policies had a disparate impact on minority and low-income tenants. The new owner made public statements about his hope to get rid of “undesirable tenants” and “attracting great residents to live in our communities.”

“To get up in the newspaper and say I’m an ‘undesirable resident’?” says Charles Ward, a former Crossroads tenant. “I told them, ‘He don’t even know who I am. He don’t know how I live.” 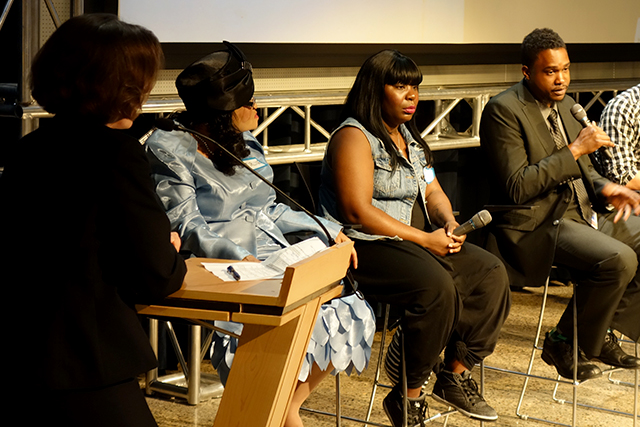 MinnPost photo by Peter Callaghan
After a preview airing of the documentary “Sold Out,” three former tenants of the Crossroads apartments talked about the experience. They are, left to right: Jurline Bryant, Maria Johnson and Bernard Campbell. The panel was moderated by Met Council Regional Policy & Research. Manager, Libby Starling, at far left.

All of the displaced tenants were put out into a housing market that already was short on supply. Many said they found housing, but only in unfamiliar communities that lacked the connections, transit service and amenities of their old neighborhood.

The transformation of the building — it’s now called the Concierge — also disrupted the community around it. A small grocery store closed. And the combination of the changes at Crossroads and other similar buildings in Richfield led to a reduction in enrollment at the city’s schools. That led to a loss of 31 staff — teachers, aides and administrators — said Steve Unowsky, Superintendent of Richfield Public Schools.

“Sold Out” ends with some hopeful news. Hanson of the Minnesota Housing Fund said the organization this week announced the completion of its fundraising drive for a plan to help maintain naturally occurring affordable housing. The $25 million fund has contributions from government, nonprofits and community banks, and will be used to purchase or finance the purchase of buildings like Crossroads that are on the market. The investment from the fund will help new owners keep rents lower than might occur had the building been sold to more profit-oriented buyers.

But the ambitious goal of saving 1,000 units over three years, while significant, is not enough to replace those being lost, Hanson said. Activists and advocates said there must be more investment in affordable housing by the state and federal governments.

“I think it’s really up to the political leaders, both rural and urban, [and] to each citizen in the community to really step up to the plate,” said Met Council member Gary Cunningham. “Because people of color, low-income people aren’t going anywhere.”

The documentary was produced by Kevin Dragseth under the TPT Partnerships program, with funding provided from the Metropolitan Council, the Greater Minnesota Housing Fund, the NOAH Impact Fund, the Family Housing Fund, the Beacon Interfaith Housing Cooperative, Aeon and the McKnight Foundation.