When the lock at Upper St. Anthony Falls was closed to ship and boat traffic two years ago, it  became pretty much just that: a closed lock. After years of U.S. Army Corps of Engineers sponsored tours, the lock and its visitor’s center was off-limits to the public.

That changed in 2016 when the lock was re-opened for summertime tours, thanks to a partnership between the Corps, the National Park Service and the non-profit organizations Mississippi Park Connection and Friends of the Lock and Dam. Those tours will continue beginning Sunday and run through Labor Day Weekend. Tours both guided and unguided will be available seven days a week from 9:30 a.m. to 5 p.m.

Public access to the lock may be a sign of what’s to come in the future. After closing the lock under orders of the U.S. Congress, the Corps still owns the facility and can open it during periods of high-water volumes for flood control. But it is currently in the midst of a process to decide what the long-term use should be.

Sometime later in the summer, the Corps will recommend one of four options for further study: keep the current status, deauthorize the lock and and dispose of it, transfer it to another entity or keep it under Corps jurisdiction but add an additional function such as recreation. Once a choice is made, a study and plan will need to be created by the Corps.

Ultimately Congress would decide what to do with a federally funded lock complex built in 1963 for navigation and flood control. The Upper Lock is by far the largest on the Mississippi — 49.2 feet between its high and low points. While it had some commercial barge traffic and was used by recreational boaters and paddlers, the lock was ordered closed to halt the spread of invasive carp.

The Corps in the St. Paul District continues to operate the 25-foot lock at the Lower St. Anthony Falls near St. Paul, said Michael DeRusha, lockmaster for both the upper and lower falls. His staff is still responsible for opening the Upper Lock at periods of high water, something done just six times since the lock was completed, most recently in the spring of 2014. 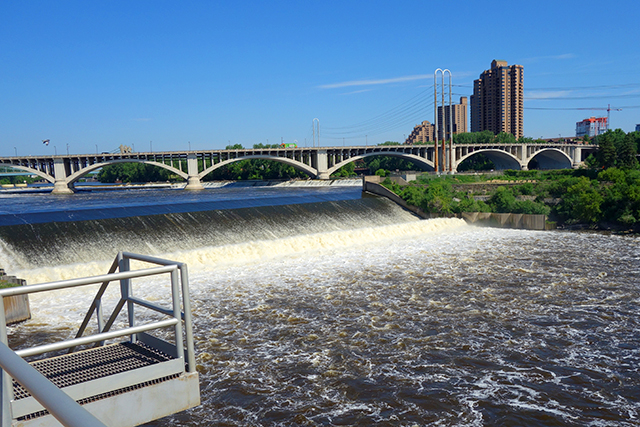 MinnPost photo by Peter Callaghan
The lock was closed to navigation two years ago, but it still affords a great view of the falls.

Parks and river advocates hope that the long-term use would be to turn the facility over to the Park Service, who would build and operate a larger visitor experience as part of the larger Mississippi National River and Recreation Area based in St. Paul. It would be a place to interpret the history of the area — from the Native Americans who preceded white settlers to the industries that tapped the water power and built the city.

While such a vision might be eight years away or more — and proposals to build a small hydro power facility in the lock are still being discussed — building a connection between visitors and the falls is part of creating momentum toward creating a significant National Park presence in downtown Minneapolis.

Starting Sunday, visitors can walk up to the three-story Corps of Engineers control building (enter beneath the Stone Arch Bridge from Portland Avenue) and view the lock from the viewpoints within. There will also be displays about the history of the lock and the Mississippi National River Recreation Area. A staff person will be there to answer questions or explain exhibits.

Three times daily — at 11 a.m., 1 p.m. and 3 p.m. — visitors can take a tour guided by a ranger that includes access to the lock walls. There are no reservations taken but there will be a signup sheet at  the main gate near the public restrooms. (A side benefit of the partnership is that the restrooms are open for users of the Stone Arch Bridge, Mill Ruins Park and the trails that pass through with the Minneapolis Park & Recreation Board taking on cleaning and maintenance duties.) 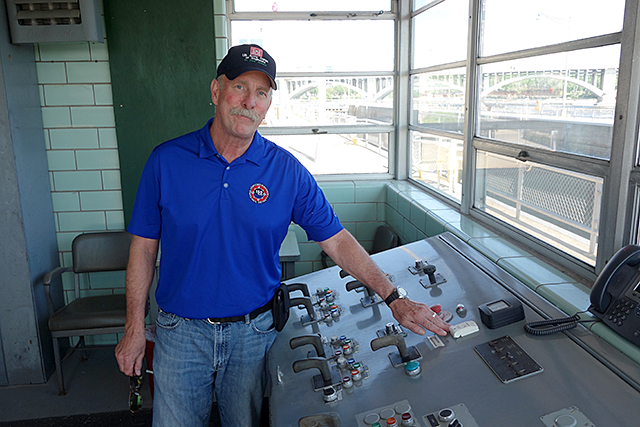 MinnPost photo by Peter Callaghan
Michael DeRusha and his staff is still responsible for opening the Upper Lock at periods of high water.

There is no charge for the tours but the park service says no children under five can take the full tour as the railings and fencing were designed for Corps employees operating the lock, not for children.

During a preview last week, Ranger Dan Dressler said visitors will have views from the railing down into the mostly empty lock.

“This is far and away the highest lift lock on the entire Mississippi River,” Dressler said. The water left in the lock is about nine feet deep. Because it is protected from the wind, the calm water exposes fish and turtles that swim in and out, he said.

Vistas of the falls — not easily seen from the west bank riverfront — are opened up from edge to edge. Those on guided tours start on the visitor center side where most of the narrative about the history of the site and lock complex is explained. They then are allowed to cross a small bridge over the top of the lock. On the far side is a large deck with views into the lock and over to falls.

Standing on that deck is a good place to see how the falls delineate a stark change in the geology of the Mississippi River, Dressler said. 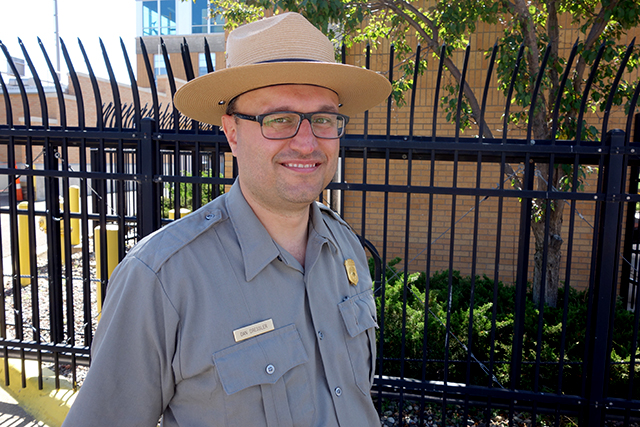 MinnPost photo by Peter Callaghan
Ranger Dan Dressler said visitors will have views from the railing down into the mostly empty lock.

“If you look upstream, the city is just barely above the river. There’s no big river valley,” Dressler said. Downstream from the lock, he said, “is where the river valley starts. It goes through a narrow gorge and then in downtown St. Paul and at the Minnesota River is where it really starts to open up. It’s the first spot where you get to see the classic Mississippi River bluffs and a deep valley.”

At the downriver end of the lock sit narrow ladders that reminded DeRusha of an unpopular chore of lock staffers — climbing down with a bucket of grease and using their free hand to grease the moving parts of the lock gate. “Everyone had to do it,” DeRusha said.

The guided tours take about 30 minutes. And because they are operated by the park service, visitors can have their National Park Service passports stamped at the visitor center and can purchase National Park and Federal Lands passes (credit cards only).