For an event billed as being part of “Resistance Summer,” there was very little talk of who was being resisted.

“I can’t even get the name out, so I won’t,” said Tom Perez, the former U.S. Secretary of Labor who recently became the chairman of the Democratic National Committee.

In his new role, Perez was in South St. Paul late Monday afternoon to rally groups organizing against He Who Must Not Be Named, better known as President Donald Trump. Perez and other local Democratic leaders hailed groups like Indivisible, Swing Left and Our Revolution, all of which have formed since Trump’s inauguration in communities across the country to push back against the president’s agenda.

Still, Perez said little about Trump to the crowd of activists and labor organizers gathered in the AFSCME Council 5 labor hall, instead focusing his speech on other issues: health care access, paid family leave, higher minimum wage, retirement benefits and the desire among Democrats to make up for the losses of the 2016 election. That was by design: One of the main criticisms of Democrats last fall was their constant railing on Trump, rather than creating a vision of what they’d offer voters instead.

“This is the worst and most serious stress test on our nation’s democracy in generations,” Perez said. “We have to understand that. And the thing that gives me so much optimism, my friends, is you.”

Perez visited Minnesota alongside Rep. Keith Ellison, who is now the deputy chair of DNC while also representing Minnesota’s 5th Congressional District in the U.S. House. The broader goal of these events is to build up the infrastructure of local Democratic party units across the country in order to boost their organizing efforts well ahead of the 2018 election. After the rally, Perez and other Democrats went door knocking in the 2nd Congressional District, which stretches from West St. Paul down to Wabasha County, and is represented in Congress by first-term Republican U.S. Rep. Jason Lewis.

The early activity follows an abysmal 2016 election for Democrats in Minnesota, where they lost control of the state Senate and shed even more seats in the state House, leading to the largest Republican House majority in a decade. They also lost a targeted race in the 2nd Congressional District, plus 19 counties that flipped from former President Barack Obama to Trump, nearly giving Republicans a win in a state that hasn’t gone to a GOP presidential candidate since 1972.

But the Trump triumph was quickly overtaken by a series of controversies that continue to dog the adminstration, from the court fight over a travel ban to the ongoing investigations into Russian interference in the election. And in the wake of those imbroglios, Democratic groups are experiencing a flood of new activity: Volunteers and membership in traditional liberal organizations have swelled; new groups like Indivisible have cropped up; and myriad Democratic candidates have already launched campaigns for competitive legislative and congressional seats, with more on the way, top party leaders say. 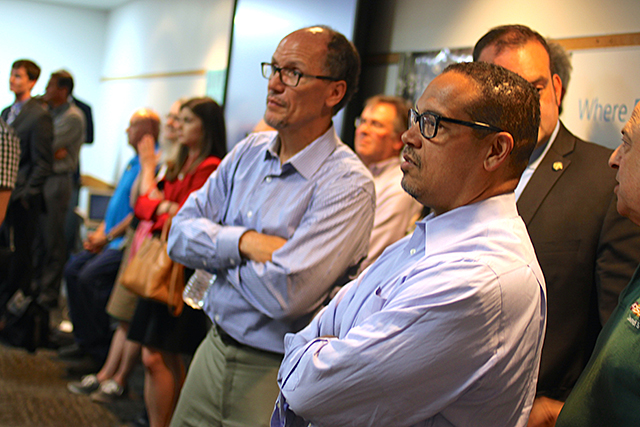 MinnPost photo by Briana Bierschbach
Rep. Keith Ellison, right, told the crowd: “If we want to win in 2018, you better be out there in 2017.”

By harnessing the energy aimed at opposing the president, Democrats hope they can keep the momentum going until 2018. “We have 17 months until the election, and I know it seems like a lot,” DFL Party Chairman Ken Martin told the crowd. “We have three commodities in the election: We’ve got time, we’ve got people and we’ve got money. We can always raise a few more dollars, we can always find a few more people, but the one thing we can’t get back is time.”

The event also follows a contentious period for the national party. Perez beat Ellison in a close and heated race for the DNC chairman job in February. During the race, Perez was viewed as the establishment Democratic candidate, while Ellison rallied Bernie Sanders supporters, many of whom still fill the ranks of state and local parties and still feel the sting of resentment over how the 2016 election played out.

After becoming DNC chair, Perez quickly asked the six-term congressman to serve as the deputy chair of the party, and there were no sense of hard feelings among the two in Minnesota on Monday. “When he and I jumped into this race for DNC, we were friends all the whole way. You know why? We had a shared set of values,” Ellison said. “So when he … said, ‘Yeah, you want to be deputy?’ I said ‘Hell, yeah, I’ll be deputy.’”

If Trump’s name didn’t get a lot of play at the event, however, one name did: Lewis, who narrowly defeated DFL candidate Angie Craig in November. Democratic leaders railed on Lewis’ vote for the American Health Care Act, the version of the heath care bill that Republicans passed in the House, and his absence from town hall meetings in the district, which Democratic activists have held in his absence.

“I’ll tell you something,” Perez said. “CD2 is turning blue.”

Stephen Bradford, a spokesman for Lewis, said the Democrats already spent millions of dollars “trying to turn this seat blue in 2016. [Perez] was understandably distracted by the Democrat infighting that carries on today.”