The paradox of infrastructure is that when it’s truly working well, it’s invisible. We take our most reliable systems for granted — things like tap water, a smooth road, or a flushing toilet. We only really notice these elaborate systems when they break, when the toilet clogs or the bridge falls down. Suddenly, the background appears in sharp focus.

Nothing reveals the infrastructure paradox better than lighting itself, the thing that we rely on to see the world. Right now, an opportunity to witness the backdrop of urban infrastructure is wrapping up in a quiet St. Paul neighborhood where, for the last few months, the city has been gathering input about LED streetlights. The test emerged from a unique collision of historic preservation, technological change, and governmental efficiency that, perhaps for the first time, forced neighbors to examine the light around them.

For almost 10 years now, St. Paul has been installing LED light bulbs into city light fixtures at every chance they get. The reasoning is simple: LED light bulbs are at least 20 percent more efficient and last longer than older lights, saving millions of dollars over the long term. So far, the staff has installed more than 6,000 of the new bulbs around the city during construction and rehab projects; during that time, they received few complaints about the new light. 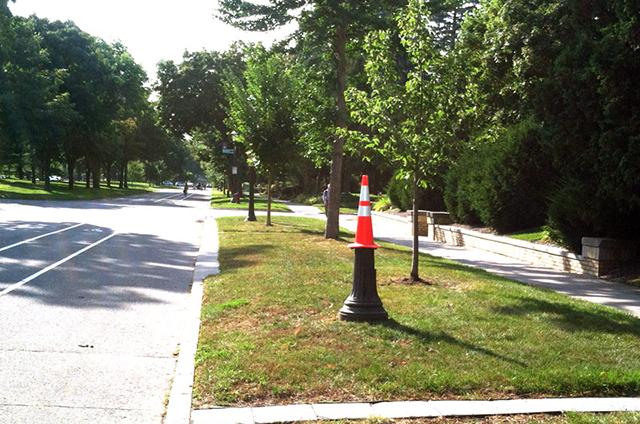 But everything changed last fall when the city refurbished streetlights in the tight-knit Lexington-Hamline neighborhood.

“The new light has changed the character of the neighborhood at night,” said Gary, a Lex-Ham resident, during a meeting last winter. “There’s light intrusion in people’s homes, and a fixture on the opposite side of the street that’s also blasting into my house so that when evening comes, the shade goes down.”

Gary was not alone. Dozens of his neighbors had been so upset by the new lights that they made significant changes to their homes: writing their council member, buying new window shades, and even moving bedrooms away from the street.

At a packed meeting at in the Central High School library last winter, city staff, including Public Works Director Kathy Lantry, Deputy Mayor Kristin Beckmann, and Council Member Dai Thao, were on hand to take the measure of neighborhood concerns. For the upset neighbors, the issue boiled down to three key points: aesthetics, health, and community. For example, many people brought up a 2016 AMA study that points to harmful effects of more “blue” or “white” light on people’s health.

“When the lights came one, everyone sitting on the porch would groan and turn away,” one woman testified. “We’d all have to move our chairs, and we’re front-porch people. So what are the city’s options if we stick with an LED light?”

“We have always had a block party active,” Diana Scimeca, who lives off Dunlap Street, told me last month. “On our block it’s always gone late into the night, but the minute the lights came on, we said, ‘We can’t sit out here. It’s just horrible, it’s blinding.”

A key part of the problem is that not all lampposts are made equal. To the keen eye, there are dozens of differences.

Photos by Bill Lindeke
St. Paul has long been proud of its distinctive lampposts.

One of St. Paul’s unique charms is its manmade canopy of human-scale lamps that line nearly every street. The city has long been proud of its distinctive lampposts, sturdy metal fluted poles topped with historic hexagonal lanterns, and if you wander the streets of St. Paul and begin to notice them, the posts come in a surprising array of styles.

The thing that made Lex-Ham’s LEDs upgrades different is that not all St. Paul lampposts are alike. Most of the streetlights that received LED light upgrades in the first years of the city’s rollout were not historic vintage lamps. Instead, the new bulbs had been put into “cobra head” fixtures (a pole curving over the street with a bulging bulb at the end) or “globe lights” (self-explanatory) in the downtown core.  Neither of these styles have the lighting dynamics of the city’s more classic model.

Even when the city began installing LEDs in the city’s distinctive “classic” street lamps, there were still a bunch of subtle differences. Most of the old-fashioned-looking lampposts in the city are actually modern retro replacements — new fixtures designed to look like the old ones. But a few neighborhoods, like Summit Avenue, Irvine Park and Lex-Ham, kept their original vintage lamp fixtures, many of which are almost a century old.

“In replica lanterns, the way that the diode directs light is not straight out, like into houses,” explained Christine Boulware, an historic preservation expert who happens to live in Lex-Ham, and attended last fall’s meeting. “With these historic lanterns that our neighborhood fought very hard to keep, the direction of light is more into people’s homes than lights on Montreal [Avenue] or Ford Parkway.”

(Fun fact: The Lex-Ham Community Council proudly boasts that it’s the oldest community council in the city. It got started back in the 1970s organizing around an effort to save their historic lampposts.)

In Lex-Ham, the tiny details between the lampposts ended up making a big difference in the street.

Deep inside history of street lighting

It turns out that the history of urban street lighting is secretly fascinating, and once you open up Pandora’s light bulb, a complex world appears. The first wide-scale urban lighting in St. Paul were gas lamps, installed in the late 19th century beginning in upscale neighborhoods. (For example, the old “island station” power plant that was torn down in the river valley a few years ago was originally called Saint Paul Gas & Light Company, beginning as a gas supplier before moving to coal-fired electricity.) Since the shift to municipal electricity, lights have been constantly evolving in the name of efficiency and safety.

According to Kathy Lantry, who heads the city’s Public Works department, there are some older city staff members who remember all the way back to when the city switched to HPS lighting in the first place starting in the late ’80s, gradually replacing the (whiter) mercury vapor lamps.

“There are people in Public Works who have been there a long time,” Lantry explained at the winter meeting. “When we went from old mercury lights that were really bright to the HPS we have now. Back then, a lot of people thought that everybody looked jaundiced. So part of this is very different color light, and managing that change.”

And the issues do not stop with color. Here’s a sample of some more lighting terminology: “Color temperature” refers to the precise temperature and spectrum at which the light shines, measured in degrees on the Kelvin scale; “wattage” refers to how much energy it consumes; and “intensity” refers to its brightness, measured in lumens from various distances.

(There’s also “voltage,” but to be honest, this is over my head. LED works at a much lower voltage than HPS, for what it’s worth.)

Each kind of technology and bulb has specific properties along these different spectra, and where it becomes problematic is that, while LED does very well in terms of having a low wattage and high lumens, its default color temperature is a “white” light around 4,000ºK. High-pressure sodium vapor lighting, on the other hand, ranges around 2,000 to 2,300ºK. That color temperature gives it a distinctive — I find it pallid — yellowish hue.

“[In 2008,] the only readily available hues were 5K and 4K,” explained City Lighting Engineer John McNamara last fall. “The year we decided on 4K was when we did the downtown globe lights. 4K is neutral light, and part of reason we chose it is it’s closest to color-neutral light. It was readily available at the lowest temperature that we felt appropriate.”

Years later, the 4,000K bulbs do not seem to be rubbing people the right way. After the outcry, the city discontinued the bulb replacement and began a lighting test this spring. Engineers chose three neighborhoods on the East Side and central St. Paul, and installed eight kinds of LED bulbs, many of which were new models that have appeared on the market. Some of the bulbs burn at different color temperatures, or have different shapes. Neighbors were invited to send feedback to the city about which they liked and disliked. 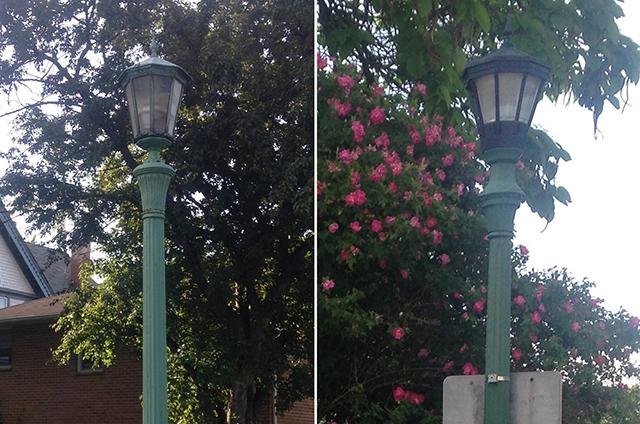 Photos by Bill Lindeke
Subtle differences between old and new lamp enclosures in nearby Merriam Park.

The test ended last week, but so far the results are mixed.

According to Amy Gundermann, the director of the Lex-Ham Community Council, many people remain unhappy with their options.

“Neighbors have told me that they are disappointed in all of the options,” Gundermann explained this week. “Of the eight bulbs tested in Lex-Ham, four are still 4000K bulbs, which is the Kelvin level of the LED bulb installed last year. It seemed unnecessary to test those bulbs in light of the AMA report and resident reaction. I hope the results of the surveys are helpful to Public Works in determining a lighting solution that is both efficient and livable. Our city is safer when people enjoy their front yards.”

Still, designing lighting that works for the entire city is a staggering task when you have more than 37,000 light bulbs hanging over city streets. Engineers are very reluctant to adopt what they call “a piecemeal approach”, where each neighborhood has a different kind of bulb. For logistical reasons, they would prefer to have a single bulb that works for everyone. But with the diversity of lampposts, environments, and urban design details, that might prove to be an impossible challenge.

For her part, Diana Scimeca has low grades for the new light bulbs.

“There are two that are just a pitch more yellow, a lower kelvin,” Scimeca said. “They’re better on a relative scale — they’re like a 2 for livability as opposed to a 1 — but they’re still not yellow enough or shielded enough. It’s a little frustrating.”

Scimeca hopes St. Paul has a bright idea up its sleeve that will bring back her nighttime block parties. Meanwhile, the test bulbs are still up in Lex-Ham and the other neighborhoods. If you’re curious about subtle distinctions of LED technology, check them out for yourself. It’s an enlightening experience.

St. Paul’s LED test illuminates the complexity of light itself