In the end — or at least the near end — the once controversial idea of having a $15 minimum wage in Minneapolis wasn’t especially controversial.

A Minneapolis City Council that just two years ago lacked the votes to pass a city-only wage — and whose members were still skittish about the proposal a year ago — overwhelmingly approved an ordinance that will phase-in a $15 wage over the next five-to-seven years.

So, it’s gonna pass Friday. And that’s when the speeches and congratulations will come. But Wednesday’s action means Minneapolis will become the first city in the state to adopt minimum wages higher than the statewide level (currently $9.50 an hour for large employers), joining three dozen or more cities in the U.S. who have approved a move toward a $15 wage.

As expected, there was no attempt to amend the draft ordinance’s omission of a tip credit, rejecting pleas from restaurant owners and servers who fear the lack of such a provision will damage their businesses and cost them income.

Not even the amendments that were offered attracted much disagreement, with most passing easily.

One of those amendments could benefit many local restaurants. It would create a longer phase-in period for businesses with fewer than 100 employees. While a draft ordinance had five-year phase-ins for both large and small employers (with slightly steeper increases for large employers), Council Member Jacob Frey proposed an alternative.

Starting Jan. 1, 2018, large employers would pay $10 an hour; they would then be required to pay increases each July 1, starting next year and going through 2022, when the wage would reach $15 an hour.

The timetable would be extended for small employers, though. Businesses with fewer than 100 employees would pay $10.25 on July 1, 2018, and then would have to increase the hourly rate each July 1 through 2024. Once the wages in each employer class reached $15 an hour, they would be increased annually based on the same inflation calculation used for the state minimum wage.

“I feel strongly we should be treating small business different than large,” Frey said. “A small local pizza joint is not McDonald’s, and I think the ordinance at the end of the day should reflect those differences.”

Council Member Alondra Cano, who along with Frey was among the first supporters of a local minimum wage, endorsed Frey’s amendment. But she also said she would have preferred large businesses to have a four-year phase-in period, rather than five. “While, morally, I wish this set forth four years for large businesses and seven for small, I’m willing to support this,” Cano said.

With the big issues resolved weeks — if not months — ago and the Frey amendment serving as the biggest concession for small businesses and restaurant owners, many of whom have expressed concerns about the impact of the wage hikes, the other amendments offered Wednesday dealt mostly with narrow details. Frey, for example, offered an amendment that attempts to make sure franchises or chains cannot count each outlet as a single workplace so as to be considered small businesses under the rules.

Council Members Lisa Bender, Cam Gordon and Kevin Reich attempted to respond to testimony last week against a so-called training wage, which would pay teens a lower wage for the first 90 days of a job. The intent of the provision is to encourage businesses to employ younger, less-experienced workers, but opponents said many young workers are employed because they depend on the income. 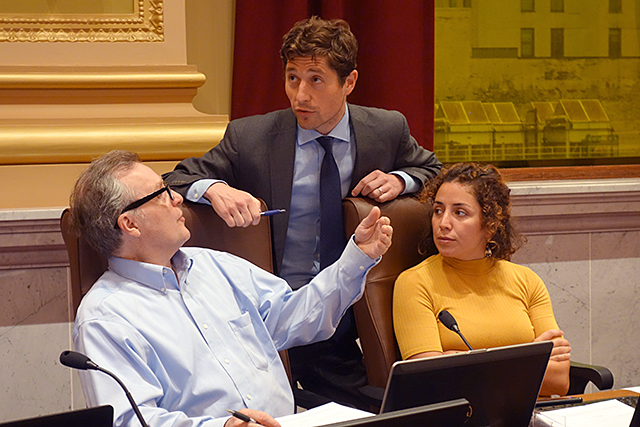 “It’s specific to youth training programs,” Bender said. “So we do not mean any job that a youth happens to have, like at McDonald’s or the grocery store. If they are doing a regular job, this would clarify that they should earn the wage that everyone else does.”

She directed city staff to come back with a report by September on other ways to balance helping youth training programs without harming young people who work in jobs also held by older workers.

Finally, Reich succeeded in getting an amendment adopted that calls for an annual external assessment of the impacts of the minimum wage ordinance, beginning in 2019. Seattle, the first large city to adopt a higher local wage, has such a requirement in its ordinance — a provision that resulted in this week’s report suggesting that the wage ordinance might be reducing jobs for the lowest-level workers.

A single ‘No’ vote

Council Member Blong Yang was the only member to vote against sending the ordinance to the full council. “With a minimum wage hike this big — close to 50 percent — it will likely hurt some businesses, especially small businesses,” Yang said after the meeting.

Yang said his Ward 5, which includes near North and north Minneapolis, is close to cities like Golden Valley, Robbinsdale, Brooklyn Park and Brooklyn Center, none of which will be subject to the $9.50 state minimum wage.

“Do people deserve it?” he asked of the higher wage. “Probably. But the reality is that we have to deal with the consequences that may result. You look at Ward 5 and there’s not a line of people who want to do business there. … Sometimes we need to beg people. If we create this climate where it makes it a little more difficult for business, what it does is people will be a little bit more reluctant to show up.”

Yang is in a tough re-election race, having already lost the DFL endorsement to challenger Jeremiah Ellison. He said the political impact of his vote has “crossed my mind” but said, “I want to make the right vote and not do it for political purposes. It is a tough vote and it would be easy to go along with the 12 others. We can end up with different conclusions, and my conclusion is that it will hurt.”