Sitting across from Mears Park on E. 6th Street, the Railroader Printing Building is as good an example as any of the increasing vitality of downtown St. Paul.

Recognizable by the bars and restaurants located on its street level, Barrio and the Bulldog, the building shares the block with several other popular Lowertown joints, including the Public Kitchen + Bar and the Handsome Hog.

Recently, though, the historic building has also become the setting for something else: a fight over skyways — and the future of downtown itself.

On March 1, the owner of the building, Jaunae Brooks, began locking the public out of its skyway at 8 p.m. rather than the required 2 a.m. More recently, she petitioned the city council for permission to make the change permanent.

Her reasons? As Brooks explained in a lengthy letter to the city, she thinks people who misuse the system are putting her tenants and the public at risk. “The homeless have been literally living in my skyway for the past few years, suitcases and all,” she wrote. “They sleep naked and clothed, cook on hot plates, eat, poop and pee, smoke cigarettes and pot creating a fire hazard, drink alcohol, have sex leaving used condoms behind, use drugs intravenously and leave needles behind, litter and vandalize my property daily.”

Brooks noted that she spent $10,000 on replacement carpet, new locks, new glass, new cameras, private security and extra cleaning. She monitors the cameras herself and has security pass through on patrol, but hasn’t been able to resolve the problems. And she has the support of tenants, including the restaurants, as well as the residents of the River Park Lofts across Wacouta Street.

Chuck Repke, a lobbyist hired by Brooks, told the city council last week there is no reason for anyone to be in the skyway in Brooks’ building after 8 p.m., (she’s offered to give the keypad code for the lock to anyone who lives or works in the area who wants to pass through).

Repke also noted that of the six skyways in St. Paul that have been given permission to close early, five are either owned by government entities or are leased to government agencies. “The city and the Skyway Governance Committee seem locked in that the entire skyway system must be on the same schedule unless you either are or rent to the government,” he said. “The only reason the city requires us to be open longer is because it can.”

The St. Paul City Council has put off a decision on Brooks’ request, and extended the time when public testimony will be heard. But the application has drawn plenty of opposition — sometime passionate — from downtown residents, the disabled community and even city staff.

The Skyway Governance Advisory Committee, which does exactly what its name suggests, opposes the request, partly because Brooks closed her skyway before getting city permission. The committee members also wrote that they don’t think she provides the level of security required by the city. “An hours waiver should only be considered in cases of need, not for the convenience of financial advantage of building owners,” the committee wrote.

Rick Cardenas, a resident of the area and a disabilities rights activist, told the council last week that the early closing of the skyway poses a serious problem for those with disabilities, since the only access to the restaurants below is through the skyways and elevators down to the ground level. “St. Paul prides itself on being an inclusive city,” Cardenas said. “But an inclusive city means all aspects of a city should be open to people with disabilities.” 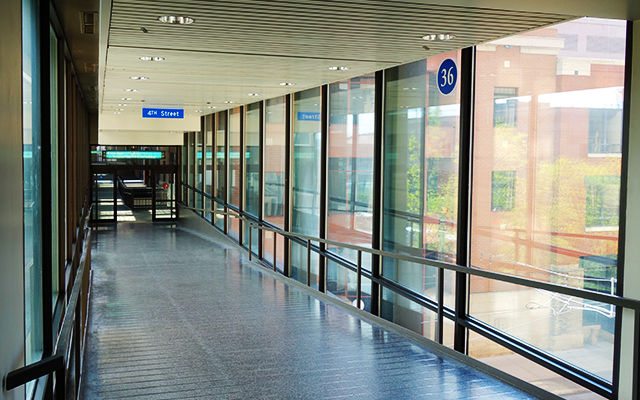 MinnPost photo by Peter Callaghan
A skyway over 4th Street in St. Paul.

William Tilton, A St. Paul lawyer, sent a letter to the city threatening legal action should skyway access to the restaurants be blocked, since neither the Bulldog nor Barrio provide access at street level entrances. (Brooks said Wednesday she is working on a temporary and permanent way of providing ADA-compliant access to the two restaurants).

City officials aren’t on board, either. Dan Niziolek, deputy director of the city’s department of safety and inspections, told the council the staff doesn’t think the early closure should be allowed because the passage in question is not at the end of the system and is connected to businesses that are open later than 8 p.m.

He also questioned Brooks’ security. “A majority (of building owners) are providing at or greatly above the level of security expectations,” he said. “There is a major commitment by property owners. Unfortunately that’s not uniform across the skyway system. As you walk through our skyway system, I think you can recognize where the investment is and where the investment is not.”

Rules from a different era

Unlike the mostly private system in Minneapolis, St. Paul’s skyways are governed by a legal agreement between the city and building owners. In most cases, the city paid for the skybridges in exchange for easements that require public access at hours set by the city. Private security works with the police to patrol and enforce the rules in the passageways.

And while Brooks’ application didn’t start the debate over the city’s skyway system, it has focused attention on what many have come to see as a serious problem.

After a request similar to Brooks’ was denied in 2016, Ward 2 City Council Member Rebecca Noecker began working on broader solutions to many of the concerns about the skyways. And since February, she has been co-chair of a work group that includes downtown building owners, residents, the St. Paul Chamber of Commerce, youth and homeless service organizations.

That work contributed to a set of ordinances the city council will consider over the summer to update the code of conduct that guides St. Paul police in eliminating bad behavior — and to clarify the security requirements of building owners, including a requirement that building owners actually lock their doors at closing time. The council will also consider changing the skyway closing time from 2 a.m. to midnight.

“If you think about it, skyways are an anomaly. They are a very bizarre concept.” Noecker said at a press conference announcing the proposals last month. “They are public space in private buildings elevated up into the sky. Are they streets? Are they thoroughfares? Are they destinations?” 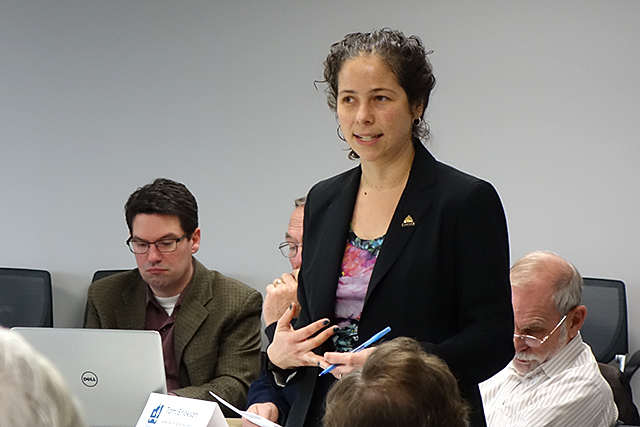 Some users of the system say recent problems coincided with the June 2014 opening the Central Station of the Green Line, where many people wait for buses and trains and which includes a prominent stair and elevator entry to the skyway system.

Since complaints began to increase about people lingering in the skyways, the St. Paul and Metro Transit police have become a prominent presence in and around the station’s elevator tower. Community Ambassadors, who work with young people to try to keep them out of trouble and direct them to programs and services, have also increased their presence, thanks to the help of a $150,000 appropriation in the city’s 2017 budget.

The city also hopes that the opening of the new Dorothy Day Center and the coming expansion of its downtown campus will increase services for homeless people who might otherwise resort to taking shelter in the skyways.

Still, the city feels it needs to clarify rules governing behavior in the skyways, including getting rid of a rule that required police to issue a warning before it could issue a citation or make an arrest. “Because the law isn’t clear, law enforcement isn’t able to enforce it with confidence,” Noecker said. “And people who use the skyways aren’t sure what is acceptable. That has to change.”

The current code of conduct dates from the early 1990s, she said. “It prohibits loud music through boomboxes. Nobody’s doing that anymore so I guess the ordinance was successful,” she joked.

Repke said he thinks the late skyway hours were born of a time when downtown was a different place, when new developments focused activities on the skyway level and not, as is the case now, on the street level.

In fact, before the current rules were put in place, the Railroader Building’s easement with the city allowed for closure at 6 p.m. They’re open late, Repke said, “because we need to go from the bars in the World Trade Center to the park in Town Square to the movie theaters in Gaultier Tower. They haven’t understood yet that the bars aren’t open in the World Trade Center anymore, that Town Square Park is closed and the theater is office space.”

City and business officials are trying to walk a narrow path in responding to problems in the skyway — or anywhere downtown. They want to address the things that have become problematic without sending a message that too much is wrong. Nearly every acknowledgement of anything related to crime, intimidation and unsanitary conditions in the skyways is preceded by some bragging: that St. Paul’s downtown is busier than it has been for decades.

But not wrestling with problems for fear of giving the place a bad reputation also puts those gains at risk. So you get statements like the one Mayor Chris Coleman made last month while announcing ordinance changes: “We want to make sure that when people come down here to live, to work or to play that they see this as a welcoming place. It hasn’t affected our ability to attract folks but we don’t want it to get to that point.”

Or this from Noecker: “We absolutely have to make sure that everyone who lives, who works and plays, who goes to school and comes downtown to enjoy the wonderful, wonderful things we have here feels safe while they’re doing so.”

The council will hear final testimony on Brooks’ request June 21. Staff expects to bring the ordinance changes to the council this summer with the first public hearing tentatively set for August 2.

Why a dispute over skyway hours is really a fight over the future of downtown St. Paul