Opponents of a St. Paul plan to redevelop the land where Ford built cars and trucks for 84 years didn’t prevail in a city planning commission vote last week.

The plan they vigorously — and at times tearfully — oppose passed unanimously. It now moves to the City Council, which will conduct its own process complete with public testimony in the fall.

That doesn’t mean opponents centered in the neighboring Highland Village neighborhood weren’t on the minds of commissioners and city planning staffers. They spent much of Friday’s meeting explaining the causes of what has become a raging conspiracy theory as well as going through the top complaints from opponents — that the plan is too dense and too tall and produces too many people and cars.

Few changes were made to the plan, however. And those that were came primarily from staff and commissioners, not opponents.

The latest controversy might be called the Curious Case of the Missing Comments. A glitch in the city email box set up to receive and collate comments resulted in some 200 comments being left out of initial reports. Opponents who are organized as Neighbors for a Livable Saint Paul sent letters to St. Paul Mayor Chris Coleman and Ward 3 City Council Member Chris Tolbert demanding a delay in the planning commission vote.

“Whatever the reason for those comments having gone missing, the community has lost confidence in the accuracy of information published by the city and presented to the Planning Commission regarding public opinion toward this project,” said group spokesman Charles Hathaway in a statement.

But after acknowledging that some comments — both opposed and in favor of the Ford plan — had been misplaced, senior city planner Merritt Clapp-Smith said they were found in time for the meeting of a commission committee two weeks ago and were sent to other commissioners shortly thereafter. She said staff has compiled them and recalibrated a chart showing the sentiments of commenters.

All comments have been posted on the Ford project website [PDF] since July 13, she said. Clapp-Smith said the missing letters were more in opposition than in support, “but there were some very strong support letters as well. It wouldn’t have behooved us to ignore a set of comments of that nature intentionally. It was a very unfortunate error.”

The comments — both the initially found and the initially missing — total 400 pages. While not all fit easily into pro or con sentiments, Clapp-Smith said some 58 percent oppose the plan, 34 percent are favor and 8 percent are mixed. Those opposed think the built-out site will be too dense, with taller commercial and residential buildings that are out or character with the single-family and low-rise apartments in the neighborhoods to the north and east. Too many people and cars will make traffic in the area worse than it already is and the transit improvements hoped for by the city remain speculative.

There are also many comments in favor, including from neighbors organized as Sustain Ward 3 and many organizations who think the area should be a dense, mixed-use community with ready access to both St. Paul and Minneapolis downtowns and the airport. The density would support the retail and restaurants that would create an urban setting missing elsewhere in the city. And the city could use the revenue generated by the redevelopment. 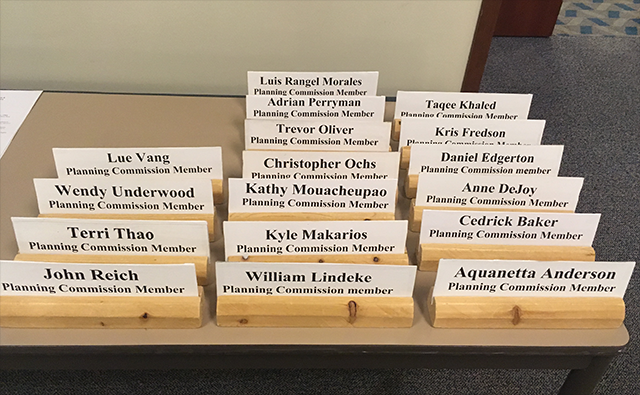 Most of the once-missing comments mirror those already received. Still, some commissioners thought it would be wise to send the matter back to the commission’s Comprehensive Planning Committee that had already given it unanimous support.

“In this type of commission, the process is important and I just want to make sure that while we’re moving forward, we can move forward in saying we heard the community and were flexible enough to send it back to committee,” said commissioner Cedrick Baker. “My concern is more with the reputation of the process.”

But Commissioner Kyle Makarios said the committee had all of the comments when it met to discuss and approve the plan and doubted the result would change by having the committee meet again.

The motion failed on a 9-7 vote. Then, when the commission held its final vote on sending what is formally known as the Zoning and Public Realm Master Plan to the council, all members present raised their hand to vote yes.

A few changes, a few clarifications

The plan as debated at a public hearing June 30 has been changed in a few areas. Staff asked for a few adjustments, such as an intention to require any parking structures built to be convertible to other uses if the need for parking declines.

The Comprehensive Planning Committee also wanted the commission on record in support of an idea to change the configuration of Mississippi River Boulevard to erase a sharp curve near Hidden Falls to make more room for open space. That had been requested by the National Park Service, which manages the Mississippi National River and Recreation Area.

The planning commission Friday made another significant change. At the suggestion of Commissioner Kris Fredson, a zone along Mississippi River Boulevard was change from one with the lowest density on the site to something a bit more intense. 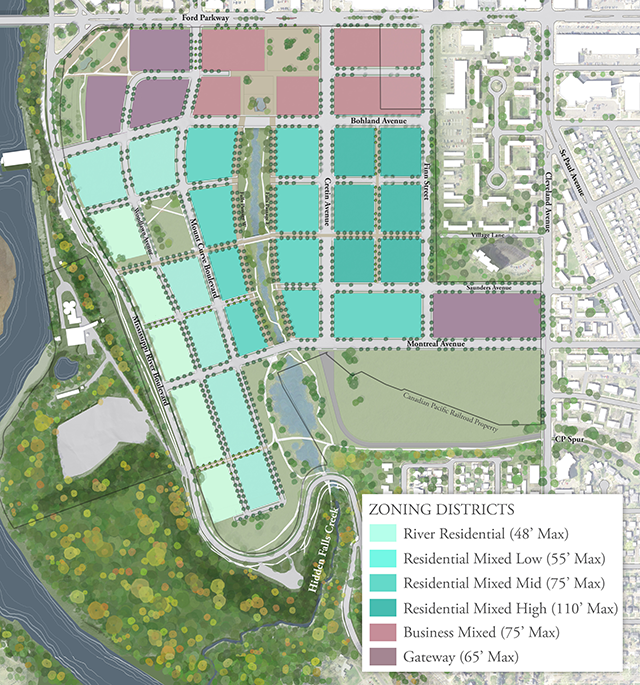 The initial idea was to fit in with the types of housing along the boulevard east and west of the Ford site — mostly large and sometimes historic single-family houses. But rather than connected townhomes of two-to-six units with accessory single-family units on site, Fredson asked for townhomes of up to 16 units.

He said it would allow more people to live on one of the most attractive roads in the area but take a little bit of density pressure off of the rest of the Ford site. His motion passed easily.

City staff also tried to clarify how the plan impacts issues such as building heights, especially on building sites in view of the river. State and federal rules governing critical areas along protected rivers discourage buildings that can be seen from the river surface and the far riverbank.

St. Paul has already adopted an overlay that caps building heights at lower levels than what is contained in the Ford Plan. Clapp-Smith said that overlay would trump any proposed zoning heights. But a developer could request a conditional use permit to exceed the critical area heights. And since staff believes such permits could be granted if the requester can show that it still meets the goals of the critical area protections, the Ford Plan should accommodate those heights, she said.

She also presented a rendering of how the tallest buildings in the parts of the plan that allow them might look, given other requirements for paths, open space and setbacks. The rendering was meant to dispute claims by opponents that the site would present cavernous streetscapes with rows of tall buildings. One opponent referred to it as a “concrete coop.”

“This isn’t to say whether you should like it or not like it,” Clapp-Smith said. “It is to say this is our best attempt of a maximum build out representation of scale and height so that when you do form an opinion you are forming it based on accurate information.”

Friday’s vote was the penultimate action in a 10-year process to decide how to repurpose the 135 acres still owned by Ford and 13 acres still owned by the Canadian Pacific Railway. While the city can influence redevelopment via its zoning and land-use process and by where it places roads and other infrastructure, the land will remain privately owned. 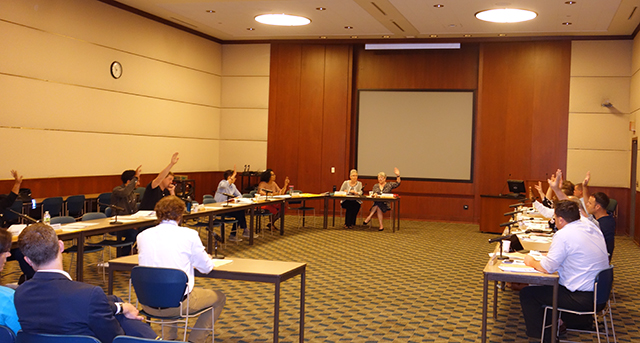 MinnPost photo by Peter Callaghan
When the commission held its final vote on sending what is formally known as the Zoning and Public Realm Master Plan to the council, all members present raised their hand to vote yes.

Ford has expressed support for the plan that allows relatively dense development with building heights in some areas reaching 110 feet. The plan would allow up to 4,000 residential units in a mix of housing types ranging from midrises near Ford Parkway and Cleveland Avenue and connected townhomes along Mississippi River Boulevard. It also envisions up to 1,500 jobs in commercial and mixed-use buildings.

Ford has been overseeing environmental cleanup and has said it expects to seek bids from master developers later this year or in early 2018. It could take 15 to 20 years to completely develop the site.

After Friday’s meeting, neighbor and plan opponent Kate Hunt said she was heartened by some commissioners’ concern for the process. But she said the neighbors group is still asking for more transparency and said the city needs to rethink the plan to regain public confidence. She also asked for an independent review of the comments so as to get an accurate count on the number opposed and the number in support.

The statement asking Coleman and Tolbert to delay action also stated that Neighbors for a Livable Saint Paul could take legal action to force the city to do so.

“The process is rushed,” Hunt said. “What’s the rush?”

Curious Case of the Missing Comments: In the end, Ford site moved forward despite feedback glitch