On the surface, you might think two organizations called “Neighbors for a Livable Saint Paul” and “Sustain Ward 3” would agree on a lot of things.

“Neighbors for a Livable Saint Paul” was organized to oppose — pretty passionately, it turns out — a draft plan to guide the redevelopment of the 135-acre site along the Mississippi River where Ford once built cars and trucks in the city.

Then there’s “Sustain Ward 3.” While it may evolve into something broader, the group is currently pushing hard for acceptance of the draft plan for the Ford site, challenging the notion that everyone in the neighborhoods adjacent to the site is against it.

Both were out in force last week when the St. Paul Planning Commission held a public hearing on what is called the Zoning and Public Realm Master Plan. And while “Neighbors” and “Sustain” weren’t the only ones who testified at the meeting, they provided most of the fireworks, reflecting both the hopes and fears involved in the ambitious effort to remake a sizable chunk of St. Paul.

The current plan is the culmination of 10 years of work by the city of St. Paul, Ford, state environmental agencies and regional economic development groups. The goal is to convert what was a big batch of bad news — the closure of the massive plant and the loss of its 1,800 jobs — into something positive.

Over that time — while Ford phased out the plant, demolished the buildings and began the work of environmental remediation — city planners began working on designs for what the city has long referred to as a “21st Century Community.”

The geography that places the site as close to downtown St. Paul as it is to Minneapolis-St. Paul International Airport always suggested an urban neighborhood where residents shared space with jobs and retail and restaurants and a craft brewery or three.

So the draft plans call for it to be a mixed-use neighborhood of mostly multifamily buildings and commercial space. Under those plans, there would be solar rooftops, the density to support stores, restaurants and transit, and even a way to deal with stormwater that includes a surface water feature — not to mention the “daylighting” of a long-buried water flow that ends at Hidden Falls. Biking and walking trails were a given. “Sustainable” was the word frequently used to describe the whole thing.

When the draft master plan was released in December, some saw it as the logical culmination of that sustainable vision. There could be up to 4,000 residential units; 1,500 jobs plus parks, trails and open space. Six different zones would govern how the site would be developed, with taller buildings near Cleveland Avenue and Ford Parkway and lower ones closer to the river.

A zone along Mississippi River Boulevard was set aside for carriage houses and smaller multi-unit buildings reminiscent of those already on the boulevard, while office space would predominate in what is termed the Gateway zone, along Ford Parkway from the landfall of the Ford Parkway Bridge to Cleveland Avenue.

Backers can hardly talk about the potential of the site without the expectation that it will be known worldwide as a place that did urbanism right. St. Paul Mayor Chris Coleman even talks of a visitor center with a world map and pushpins that would locate the hometowns of all the acolytes who’ve come to see and learn. 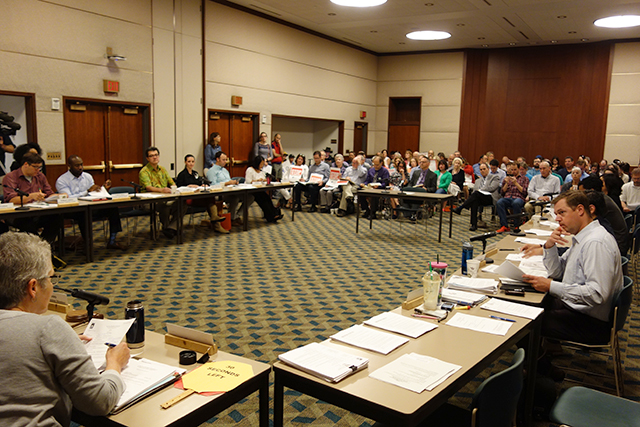 “This is the right direction for the future of St. Paul,” said Andrea Kiepe of St. Paul Smart Trips and Transit for a Livable Community.

Frank Jossi, vice chair of the Highland District Council, which has endorsed the plan, told the planning commission Friday: “I think St. Paul is in the midst of blazing a new trail with this site.”

“I’m happy to state that the plan before you could dramatically improve our city’s reputation worldwide as a leader in energy efficiency,” echoed Michael Noble, executive director of Fresh Energy, a nonprofit that promotes clean energy.

Too dense, too tall, too much traffic

Not everyone was enamored of the plan, of course. And though it might be trite to see the dispute as generational — old St. Paul vs. new St. Paul — it’s true that longtime residents of the area surrounding the site are well represented among those opposing the draft plan.

That area is one St. Paul’s most-desirable and historic districts. If not Summit Avenue, the area is well served with elegant houses from the first half of the last century, home to families who’ve lived, worshiped and raised kids there for a generation or two. And many who testified against the plan last week see it as a threat to that way of life — and a neighborhood they love.

“Right now the current vision is too dense, the current buildings are too tall and there is too much traffic,” said neighborhood resident Jean Hoppe, who called the relationship between the decade-long discussion and the draft plan a “bait and switch.”

Howard Miller, who referred to the built-out plan as a “concrete coop,” asked the commission what the hurry was with the zoning plan. Ford does not expect to have a developer chosen and work started until 2020. Between now and then, important decisions will be made that could influence the area, such as who will be the next mayor and whether a proposed transit corridor between downtown St. Paul and the MSP airport will pass through the Ford property. 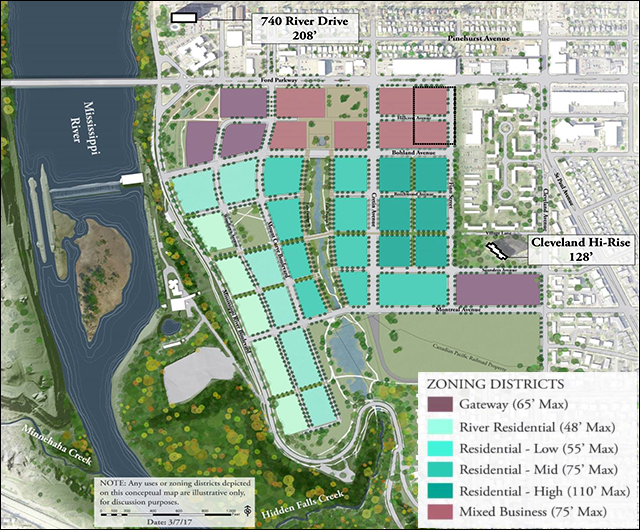 Those opposing the plan did not let Ford off the hook, either. Some accused the company of being greedy, of maximizing profits at the expense of its onetime neighbors. “What is Ford hoping to get?” Miller asked. “Does Ford want this overbuilt, mini-metropolis surrounded by hostile neighbors as their legacy?”

(Though the question was rhetorical, the answer to Miller’s question was provided later in the hearing by a Ford representative, who said the company endorses the plan.)

Leah Hedman, a neighbor who introduced herself as an environmental attorney, predicted that no one would want to live in the midrise apartments and condos, and existing neighbors would flee the area.

On the other side, supporters of the plan spoke of sustainability, of hoped-for transit improvements, of a desire to be able to walk to stores and services. And while those backing the plan weren’t exclusively younger than those who opposed it, the group certainly skewed in that direction.

Brandon Long, a neighbor who belongs to Sustain Ward 3 and is a leader of the St. Paul Green Party, noted that he is 29 years old, but that “by the time [the plan] will be built out, I will be over 50 years old.” He said the plan responds to his concerns about climate change by envisioning a future where cars are less necessary.

Kevin Gallatin, president of the Highland District Council, said the region is “growing in leaps and bounds,” and he wants St. Paul to capture a share of that growth. “With the facilities the city is planning to provide on this site, and with the excellent bike lanes, pedestrian walkways and public transportation, I think we’ll have the ability for some really excellent transit-oriented development and it’ll have a world-class reputation.”

Heidi Schallberg described herself as a renter near the site and told the commission that 41 percent of units in Highland are rentals. She said if St. Paul is to absorb the population growth that the Metropolitan Council predicts, it will need much more multifamily housing than it does now.

With its proximity to both downtowns, the airport and the river, the Ford site involves issues that go beyond current neighbors concerns, however. In fact, the region might count itself lucky that the fight is happening at all. Most of the 267 plants connected to the auto industry that were closed between 1979 and 2011 have little redevelopment potential. Accord to a U.S. Department of Labor study, half remain unused.

As such, the draft plan for the site has the support of regional officialdom. Met Council planners say it fits within regional goals; East Metro Strong says it comports with desires to beef up transit options in Ramsey County; the Capitol Region Watershed District is praising the stormwater plan, and affordable housing advocates support its affordable housing elements.

And the city’s current wish for a fairly dense redevelopment matches Ford’s desire to maximize return on the property. That is, land zoned for a six-story, mixed-use building is worth more than the same land zoned for single-family homes or townhouses. The city has expressed a willingness to use tax increment financing — essentially borrowing against the expected increased property taxes on the property — to build the infrastructure as well as subsidize affordable housing.

Not everyone who testified was either for or against the plan. Alan Robbins-Fenger, a National Park Service ranger from the Mississippi National River and Recreation Area, endorsed much of the plan, but had concerns that the proposed heights for buildings nearest the Ford Avenue Bridge are too high and exceed rules for the Mississippi River Corridor Critical Area plan.

Robbins-Fenger also asked that Mississippi River Boulevard be reconfigured to remove a curve in the roadway near Hidden Falls Regional Park, which would provide more room between the road and the bluff at the point where a restored falls will be created as part of the plan.

And Raintry Salk, president of Friends of the Parks and Trails, urged that the plan increase the requirement for parks and open space beyond the 9 percent required in the city’s existing park dedication fee program.

The planning commission now hands the chore of reviewing the plan to its comprehensive planning committee. That group will report back to the full commission toward the end of the summer. Merritt Clapp-Smith, the principal planner who has been involved in the project since it began, said she expects it will reach the St. Paul City Council in September.

While there is little to suggest the issues surrounding the plan will become less contentious or less emotional, the hearing ended with a request for such an outcome.

Leila Poullada mostly praised the vision, but said it was worth working together on resolving differences. “I just hope that the people who said they wanted to work together will try really hard to keep emotion out of this because with emotion you can’t get together and collaborate,” she said.

“So please, work together. Cool it. And God Bless St. Paul.”

CORRECTION: This story has been updated to clarify that residences proposed near Mississippi River Blvd are not considered single-family homes but accessory units sharing a lot with multi-unit buildings.

‘Cutting edge’ vs. ‘hideous’: The fight over the future of the Ford site is very St. Paul