Almost four years ago, Minneapolis City Council member Betsy Hodges stood in front of reporters and cameras to announce that she’d found money in the Minneapolis budget to start a body camera pilot program for the Minneapolis Police Department.

At the time, some saw Hodges’ announcement as political, another plank in her 2013 mayoral campaign platform. But once elected, Hodges made body cameras a centerpiece of her police reform agenda. Late last year, she celebrated a full rollout of body cameras for the entire department.

But what should have been vindication of those efforts has now become another sore spot in police-community relations. Footage that could have answered many of the questions in the July 15 shooting death of Justine Damond, a southwest Minneapolis resident who’d called in a possible assault via 911, isn’t available. The reason? Both the officer who fired the deadly shot, Mohamed Noor, and his partner, Matthew Harrity, failed to activate their body cameras.

Hodges now faces a tough re-election campaign, one made more difficult by two incidents involving police shootings. Yet neither the shooting of Jamar Clark by a police officer in November 2015 nor the death of Damond this month were recorded. Clark’s because the body camera program had not yet been fully implemented, Damond’s because the officers involved never activated them.

“It has been a tough 10 days,” Hodges said Wednesday in announcing several changes to the city’s body camera policy. “It has been a tough 10 days for the city, particularly for Justine Damond’s family. But one of the toughest things that all of us in Minneapolis have had to face is that after the time and the money and the energy that we put into making sure that body cameras were in place, we did not have body camera footage in an incident where it mattered a great deal.”

When the city’s original body camera program was rolled out, one of the stated functions was to help build public trust in a department that was lacking it, with Hodges often touting studies that show the cameras increase civility in police-community interactions and help clear up misunderstandings when incidents do occur.

What no one seemed to realize at the time — or at least comment on — is that having cameras but not using them would, as the Damond shooting has shown, do just the opposite.

“There’s now more lack of trust,” said Andrea Brown, the chair of the city’s independent Police Conduct Oversight Commission. “If the body cams are not turned on then the reaction is, ‘What did we miss?’ Civilian minds, and most minds, go to worse case scenario: They’re trying to cover up something. It completely changes what the intention of body cameras was supposed to be.”

While the changes to the body camera policy that Hodges and acting Minneapolis Police Chief Medaria Arradondo announced Wednesday are numerous, the primary one is that cameras must be turned on when an officer starts to travel to any call for service or traffic stop, or as soon as possible when “self-initiating” a call (and prior to contacting a person or exiting the squad car).

“What good is a camera if it is not being used when it may be needed the most,” said Arradondo, who replaced Janee Harteau after the former chief was ousted last week. “From this day forward in the Minneapolis Police Department, we want to add strength to our expectations.” 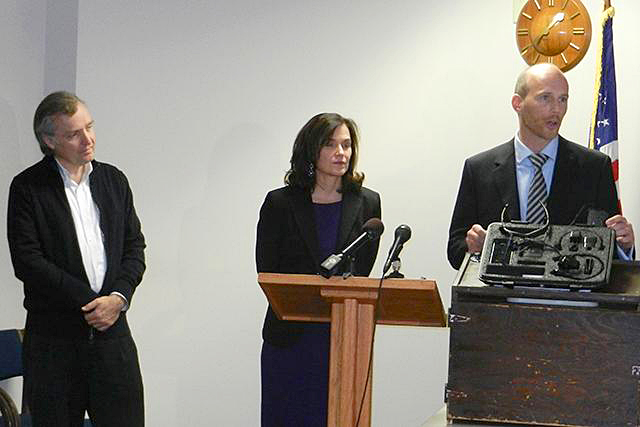 MinnPost file photo by Karen Boros
In an October 2013 photo, City Council Members Cam Gordon, Betsy Hodges and Gary Schiff are shown at a press conference announcing the discovery of $25,000 in the 2013 budget for a pilot program to equip police officers with 25 video cameras.

Both Hodges and Arradondo said these changes were in the works before the Damond killing, and Arradondo also said additional changes could be made in coming months.

Council Member Blong Yang, the chair of the city council’s public safety, civil rights and emergency management committee, said he considers the body cam policy changes to be a step in the right direction, though he also said he wasn’t aware that changes were in the works before the Damond killing.

But Lt. Bob Kroll, the president of the Police Officers Federation of Minneapolis, the union that represents rank-and-file cops, said the proposed changes are simply a “knee-jerk reaction” that are politically motivated. “The Federation worked collectively with the administration for a long period of time to develop our existing policy,” Kroll said in a statement. “The modifications of the policy should undergo the same process and not be rushed by political influence.”

Kroll said the federation objects to having cameras recording while officers are on the way to a call. “Officers tactics discussed with one another while responding to a call should not be publicly disseminated,” he said. “Only the interactions taken at the call should be recorded. The policy should change activation to arrival rather than upon dispatch.”

The changes to city’s body camera policy also address one of the big criticisms of the original policy: the degree of discretion given officer to decide when cameras were turned on and when they were turned off. Brown said her group’s recommendation at the time was that cameras be on nearly always and that officer discretion should be minimal.

That didn’t happen. But while there remains some dispute over whether Noor and Harrity’s violated the city’s original body cam policy prior to the shooting — that the cameras should have been turned on as officers drove down an alley looking for possible victims in response to the 911 call — there is little doubt that they should have been activated once Noor fired his weapon.

Under the city’s policy at the time, “Prior to any use of force situation,” is one of many situations where body camera activation is required by officers. “If a (body worn camera) is not activated prior to a use of force, it should be activated as soon as it is safe to do so,” the policy states.

After Damond was shot, Harrity has told investigators, he and Noor immediately exited the car and performed CPR while aide units were dispatched. But at no time did they turn on their cameras. Had they done so soon after the shooting, a video-only record would have still been available: once activated by an officer, the equipment used by the MPD retrieves and saves the video for the 30 seconds before activation.

‘Not using them nearly enough’

In addition to the policy changes, Arradondo also said Wednesday that the department will be training supervisors to audit the use of cameras by officers and correct any misuse — or non-use. A recent report by KSTP-TV showed the average body camera footage recorded by a Minneapolis cop ranged from just 5.2 to 6.1 hours per month.

Arradondo said averages are not as helpful as data on camera use by precinct and shift. “It should be noted that many of our officers are using their cameras a lot,” Arradondo said. “But there are some officers, quite frankly, who are not using them nearly enough.” The MPD currently has policies that include sanctions for violating the activation policy ranging from a 10-hour suspension to termination.

The department is also preparing to install systems that would automatically activate cameras when the lights and/or sirens in the car are turned on, though it will take several months before the technology is installed on the city’s 200 police cars.

“We need to build and regain our community’s trust,” Arradondo said at the news conference with Hodges. “As I’ve told all of my officers, we’ve equipped them with a lot of equipment to go out there and serve our community. But the one thing we cannot equip them with is the benefit of the doubt. They have to gain that with their relationships with our community.”

Meanwhile, City Internal Auditor Will Tetzel told Yang’s committee on Wednesday he will be working with the Police Conduct Oversight Commission and the city’s Office of Police Conduct Review to take a comprehensive look at the city’s body cam program. Tetzel said while the audit will be general, it will also “evaluate Officer Noor and Harrity’s past mobile and body-worn video recording usage.” The results of the audit will be presented the council’s audit committee on Sept. 19 and then to the public safety committee on Sept. 27.

After listening to the public safety, civil rights and emergency management committee meeting Wednesday, Brown, of the city’s oversight commission, said she believes the two officers involved in the Damond shooting violated the city’s current policy. And while she said she considers the proposed changes closer the commission’s initial recommendation, “it doesn’t matter what policy is there” if the officers aren’t following it.

To her, that leaves a question that’s been on a lot of people’s minds lately: What happens when the policy is violated. “We need to have a clear policy. ‘If you do this, then this happens,’” she said.

CORRECTION: An earlier version of this article said that the buffering feature of the Taser body worn cameras used in Minneapolis has a feature that once cameras are activated, the previous 30 seconds of audio and video are retained as part of the recording. Taser cameras record only video when in buffering mode, not audio and video.