In 1979, a British author named Jonathan Raban decided to travel down the Mississippi River to the Gulf of Mexico on a 16-foot motorboat. Raban launched his boat in Minneapolis, but he was not impressed with what he found there. “The city went about its business as if the river did not exist,” Raban observed. “No road that I could see led to it. From a gloomy little bar on First Street, I could smell the Mississippi but I didn’t know how to reach it.”

Raban could not have known it at the time, but the Minneapolis riverfront, then little more than an industrial wasteland, was about to undergo a dramatic transformation. That transformation was spurred by an obscure group of city officials who had come together earlier in the 1970s to form a committee and issue a report. But, unlike most City Hall reports that languished on a shelf gathering dust, this particular document would lay the groundwork for one of Minneapolis’ most successful, long-term redevelopment efforts.

The landmark Mississippi/Minneapolis plan, issued in 1972, provided a compelling vision of a reborn riverfront rising from the rubble of the city’s decaying milling district. Today, 45 years later, that vision has largely been achieved. No longer an industrial wasteland, the Minneapolis riverfront has become a source of civic pride and the focal point of a new residential district attracting people of all ages, from millennials to empty nesters. This population boom, in turn, has helped Minneapolis reverse decades of population loss. According to data provided by the Metropolitan Council, the downtown neighborhoods spanning the river have gained more than 14,000 residents since 2010, accounting for nearly 40 percent of the city’s overall population growth during that time.

The authors of Mississippi/Minneapolis were under no illusions about the condition of the riverfront in the early 1970s. In their report summary, they described that area as “the backside of the City” — junk-shrouded, and pockmarked with rundown warehouses, raw fill, and vacant land, cut off from the citizens of Minneapolis. But that could all change, the authors maintained, with a new vision for the riverfront.

The committee, composed of veteran city bureaucrats, proved to be amazingly prescient as it reimagined the city’s dismal backside. The 1972 plan envisioned, in the words of the report, “the excitement of Downtown extending to the river’s edge with a cultural center and an industrial museum – edged by a promenade and an elevated walkway … a new face for the City, a real gateway to the commercial city center.”

Along Main Street, then a shabby east-bank roadway, Mississippi/Minneapolis looked forward to “an historic promenade. reconstructed 19th century stone and brick buildings keynoted by the Pillsbury A Mill — a colorful, bustling, residential/commercial district where the banners of cafes and boutiques will beckon visitors.”

The report went on to discuss “the increased land values netting substantial economic benefits to the city, generated by the residential development, some of it high density, near the upper end of Main Street, at East Hennepin. But the report viewed a revitalized riverfront as more than just another economic development project. It stressed the aesthetic and recreational benefits of a network of parks and open space that could be enjoyed by visitors and residents, alike.

“From many points in the City, motorists, bicyclists and pedestrians will be directed to the river edge paths by a uniform signing system,” the report noted. “Once there, hikers and bicyclists will be able to traverse many miles of highly varied pathways.” 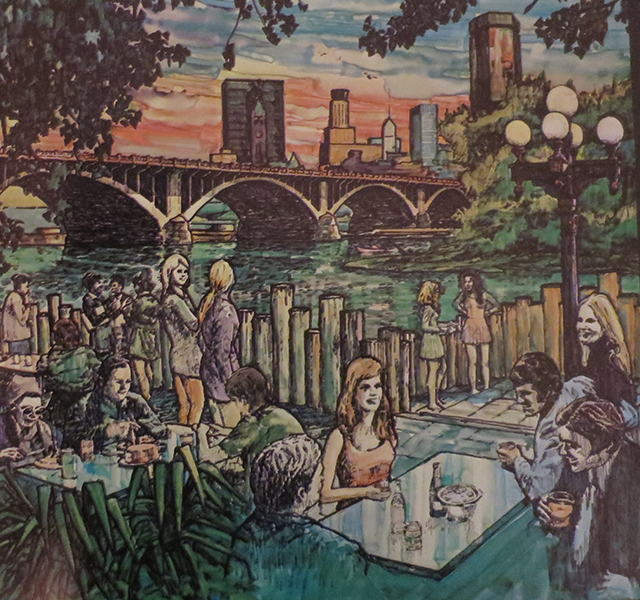 Courtesy of the author
Along Main Street, then a shabby east-bank roadway, Mississippi/Minneapolis looked forward to “an historic promenade. reconstructed 19th century stone and brick buildings keynoted by the Pillsbury A Mill — a colorful, bustling, residential/commercial district where the banners of cafes and boutiques will beckon visitors.”

The committee established to create the Mississippi/Minneapolis plan was composed of representatives from a variety of city agencies including the Planning Department, the Housing and Redevelopment Authority, the Department of Public Works and the Minneapolis Park and Recreation Board. These committee members were well aware of the challenges facing the city if it moved forward to implement the ambitious proposals outlined in the 130-page document. They cautioned that riverfront revitalization was “too monumental a task to be accomplished with a single major thrust.” Instead, it must constitute a sustained drive for the next 20-25 years. “The entire effort must transcend a ‘planning process’ or ‘a physical development process’ to become instead ‘a campaign,’ a campaign to return Minneapolis to the source of its heritage.”

A dispute, and setbacks

Riverfront revitalization did require a sustained drive, as the Mississippi/Minneapolis plan predicted that it would, but over a longer time period. During the decades following the publication of the 1972 plan, progress was slowed while a dispute arose over the future of Nicollet Island, a key riverfront landmark. That dispute was not resolved until 1983. Then in the late 1980s, riverfront renewal faced a serious setback when the massive Riverplace development failed, driving its developer into bankruptcy. But Riveplace’s collapse, along with the failure of the adjoining St. Anthony Main, provided an opening for a small development firm, Brighton Development, to make its mark on the downtown riverfront. 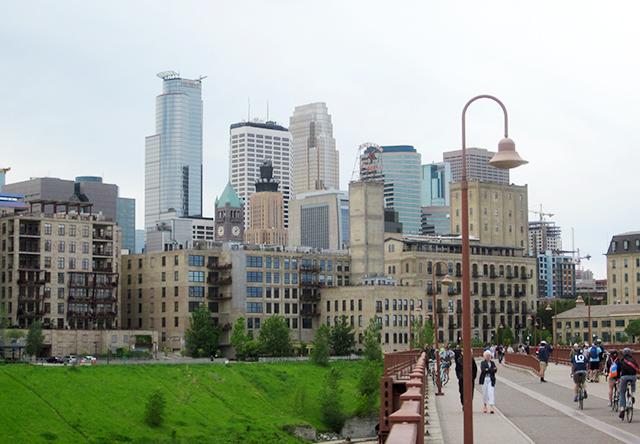 MinnPost photo by Corey Anderson
No longer an industrial wasteland, the Minneapolis riverfront has become a source of civic pride and the focal point of a new residential district attracting people of all ages, from millennials to empty nesters.

Brighton showed that it could skillfully adapt the district’s historic structures to new uses. After completing an adaptive reuse project on East Hennepin, Brighton moved across the river, where it developed a string of successful real estate projects adjacent to the Stone Arch Bridge, re-opened as a river crossing for pedestrians and bicyclists. The 2000s brought two new landmark projects: the Mill City Museum, built into the ruins of the historic Washburn Crosby Mill, and the new Guthrie Theater, relocated from its earlier Vineland Place location. The year after the new Guthrie opened, tragedy struck the riverfront when the I-35W bridge collapsed, killing 13 people. But the district rebounded with the opening of a new bridge in 2009.

Today, new residents continue to pour into the Minneapolis riverfront as new residential developments appear on both the east and west banks. While the path taken by the riverfront revival over the last 45 years may not have been envisioned by Mississippi/Minneapolis, that landmark plan continues to shape the renewal of the city’s most historic district, its birthplace on the Mississippi River.