Two apartment complexes in Richfield tell the story of one way local governments are trying to maintain the region’s supply of privately owned affordable housing.

One of those complexes, Crossroads — which is now called the Concierge — has been undergoing a significant renovation since being purchased in 2015 by new owners. Many tenants, along with housing rights organizations, have claimed that the new owners illegally pushed out residents in hopes that the infusion of capital, and the refurbished building, will attract different tenants who can pay higher rents — a story that is the subject of a recently released documentary, “Sold Out.”

The other complex, which came up during a panel discussion at the TPT studios after the premiere of the documentary, is the 422-unit Seasons Park. Unlike Crossroads, when Seasons Park went on the market, a tenant contacted Richfield City Council Member Maria Regan Gonzalez, who then quickly got in touch with Alan Arthur, president and chief executive officer of affordable housing developer Aeon.

“That was a Friday,” Arthur said of the contact with Gonzalez. “We had a purchase agreement [for Seasons Park] on the table on Saturday morning.”

Arthur now says he hopes to close on the sale sometime in September, after which he will begin putting together a renovation plan. He has gathered together money from multiple sources to purchase Seasons Park for $36 million, or a little bit more than $85,000 per unit. “We’re going to try to do it in a way that keeps the rents affordable,” he said.

In Minneapolis, Minneapolis City Council Member Lisa Goodman points to the different fates of Crossroads and Seasons Park as an example of the need for an ordinance she’s proposed. Though Goodman and city staff are still working on the details, the bill would require advance notice of intent to sell any building in the city like Crossroads or Seasons Park — buildings that fall into the category of naturally occurring affordable housing (aka NOAH) — in order to give housing groups the opportunity to make an offer for the property.

Goodman’s proposal represents just one of the ideas being considered to stem what some see as an affordable housing crisis in the Twin Cities, where a hot market and high demand have resulted in a wave of private buildings with affordable rent being bought and “upscaled” in order to attract higher rents.

One of those efforts has already become law. Earlier this year, the Minneapolis City Council passed an ordinance that would make it illegal in most cases for landlords to refuse to rent to tenants who are using public assistance such as Section 8 vouchers to make rent payments.

And last month, the Greater Minnesota Housing Fund unveiled its NOAH Impact Fund, which is seeded with money from local governments and foundations. The purpose of the $25 million fund is to purchase apartments like Seasons Park and keep the units affordably priced. That much money, however, might only be enough to purchase 1,000 units over the next several years and there is already an effort to double the amount of funding available.

“It’s really good to have a fund set up to purchase these buildings,” Goodman said. “But often we don’t know that these buildings are being sold until after the sale has gone through. I absolutely respect the right that property owners have to sell to whoever they want. But oftentimes, just some advance notice would allow those preservation-minded buyers to step in.

“The city is not suggesting that they sell or be forced to sell to anyone and certainly not for a lower price,” Goodman continued.

The Minneapolis ordinance would also give tenants subject to displacement more time to find alternative housing if the eventual sale does not include affordable housing.

And while the Minneapolis ordinance would only apply within the city, officials from the inner-ring suburbs have been meeting to see what they can do to help slow the loss of NOAH housing in their communities. “Bloomington is in an early phase and has not adopted or proposed any actions or ordinances,” said city program manager Bryan Hartman. “We are researching and meeting on the ideas that have been proposed in other cities and by others.”

Rachel Robinson is the NOAH Impact Fund manager for the housing fund. Notice ordinances are “one of the tools in the toolbox that people talk about in the NOAH world,” she said. “One of the challenges is to have funding available so that if we have a chance to intervene during a sale, then we have ready capital.”

She stressed that the fund’s backers are not looking for a discounted or non-market price. Instead, it would simply like to be able to get into the market when a property is still up for grabs.

Seasons Park is a good example of how such laws can work. In that case, the seller was not aware of the potential that a developer like Aeon would be willing to pay the asking price and keep current tenants — including several hundred Richfield School District students — in the apartments. “If Aeon had not reached out to the owner and asked for a chance to purchase, then it would have been sold without any opportunity to preserve it,” Robinson said.

Cecil Smith, the president of the Minnesota Multi-Housing Association, said the group did not want to comment on the Minneapolis proposal until it had seen actual ordinance language. The organization, which represents apartment building owners and managers, had opposed the Section 8 ordinance and some of its members have filed suit against the city claiming that it conflicts with state law and case law. 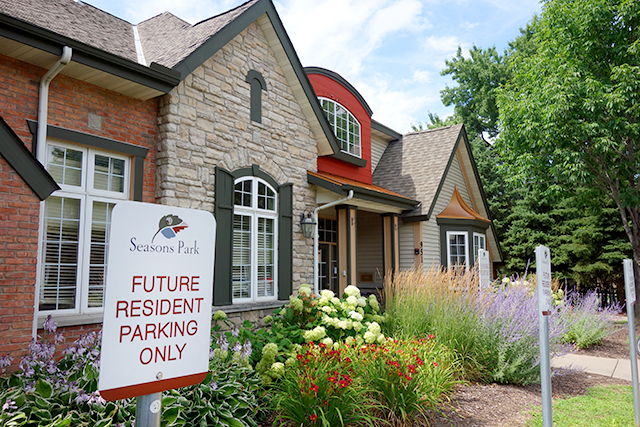 MinnPost photo by Peter Callaghan
Seasons Park is a good example of how notice ordinances can work.

Aeon’s Arthur said he considers the region to be in an affordability crisis not seen since the Great Depression of the 1930s. He said he tries to buy buildings weekly and is usually outbid by private buyers who come in with the intention of upscaling them. While he said many of these buildings require some renovation — he uses the term “tired” to describe their condition — his organization tries to do enough to renew them but not so much as to make them unaffordable.

One factor complicating such efforts is the rapid escalation in purchase prices. Five years ago, buildings like Crossroads or Seasons Park were selling for $50,000 per unit, Arthur said. Now, they are selling for between $80,000 and $142,000 per unit, depending on location and condition.

He welcomes the various efforts to help preserve affordable housing, even if they are all relatively small steps toward resolving a crisis that is the result of “35 years of inattention and insufficient resources combined with an extremely hot marketplace.”

“Anything that can slow down the problem or offer help for some group of families or individuals is a good thing to think about,” Arthur said.