Every other November, Minnesotans head to the polls for a big election. Votes are tallied, winners and losers declared and victory speeches made. But for many in the state, election season isn’t really over until another tabulation is complete, the one that once again affirms Minnesota’s civic superiority: voter turnout.

The 2016 election was no exception, with headlines in the wake of Nov. 8 bragging:  “Minnesota’s No. 1 in voting, again," “Voter Turnout in Minnesota Among Highest in Nation,” and “Minnesota leads in turnout.”

All that chest-thumping about what happens during state and federal elections in Minnesota tends to gloss over far less inspiring story, however — what happens when the state’s two biggest cities hold municipal elections. As it turns out, the residents of Minneapolis and St. Paul are pretty much slackers when it comes to voting for local offices.

Almost as good as … Charlotte

Take the most recent municipal election, in 2013. At a time when there was an open seat for mayor, just 28 percent of citizens of voting age in Minneapolis cast a ballot. Turnout was even worse in St. Paul, where 16 percent of that group voted in the election.

That’s compared to the national averages for municipal elections of between 27 percent and 34 percent, and is a fraction of the 76 percent of citizens of voting age in Minneapolis, and 71 percent in St. Paul, who cast a ballot for president in 2016.

And 2013 wasn’t an anomaly. In 2005, voter turnout in Minneapolis was 33 percent. In 2009: 19 percent. In St. Paul, the turnout in 2005 was somewhat higher than in other years, 27 percent, possibly thanks to a competitive election that saw Randy Kelly defeated by Chris Coleman. But in 2009 it slumped back to 18 percent, according to figures from University of Wisconsin researchers.

Those numbers also don’t stack up well next to other cities, even some that don’t share Minnesota’s reputation — deserved or not — for civic virtue. The Twin Cities’ mayoral turnout is dwarfed by Portland (59 percent), Louisville and Seattle (around 45 percent) and even falls behind Chicago (33 percent), according to Who Votes For Mayor, a project create by several researchers at Portland State University.

Voter turnout for mayor in Minneapolis and St. Paul
Voter turnout in Minneapolis and St. Paul is generally at or below the national average, which academics have placed between 27 and 34 percent of voting age citizens turning out in municipal races. Reports cited below use votes for mayor as a percentage of citizens of voting age and did not include data for St. Paul for 1993 or 1997.
Source: "Campaigns, Mobilization, and Turnout in Mayoral Elections (2013)," Who Votes for Mayor, Minnesota Secretary of State, Census Bureau

In terms of peers, mayoral race turnout in Minneapolis is more along the lines of Detroit, while St. Paul falls near Phoenix.

Experts attribute high statewide voter turnout in Minnesota to things like same-day voter registration, citizen engagement, high levels of education — things that Twin Cities residents share with the population of the state as a whole. So why are otherwise diligent voters so bad at showing up to pick a mayor and city council members?

Experts say one factor in municipal election turnout is timing. Like many major cities across the U.S., both Minneapolis and St. Paul hold their elections for city offices in odd years. These so-called off-year elections are a remnant of Progressive Era reforms that sought to make it harder for political machines to corrupt local elections while voters’ attention was on state and national races.

There are advantages and disadvantages to this system: One upside of holding mayor and council elections in odd years is that they become the main event; voters aren’t distracted by state and national races. And proponents of odd-year local elections often say that an informed electorate, not just a big one, should be the goal.

Furthermore, proponents of odd-year elections say tacking local races onto the end of a ballot bulging with candidates in even years — from president to senator to judge and school board — will lead to ballot fatigue.

Efforts are under way in Minneapolis and St. Paul to change the dates of the elections to even years. In St. Paul, former city staffer Peter Butler has collected signatures and expects to put the question before voters in November. In Minneapolis, the issue is under discussion at the city’s Charter Commission, but isn’t likely to be on the ballot until 2018, if ever.

Even-year municipal elections would remove the hassle of going to the polls, advocates of the change say, thereby increasing turnout. They point to cities like Portland, Oregon; Scottsdale, Arizona; and Richmond, Virginia, where mayoral races fall in the same years as presidential elections and where turnout for mayoral elections averages north of 50 percent. In Louisville, where elections are held during midterm election years, the turnout in 2006 and 2010 averaged 61 percent, the Wisconsin researchers found.

But timing isn’t the only thing that affects how many people show up to the polls. Researchers have also found links between competitive elections and voter turnout: Unsurprisingly, people tend to vote in higher numbers when they feel their vote matters.

While candidates of many political stripes run for mayor and council in Minneapolis and St. Paul, municipal offices have long been dominated by candidates affiliated with a single political party: the Democratic-Farmer Labor party (mayor and council races are technically nonpartisan in both cities, though ballots in Minneapolis do include descriptors, which are often party affiliation). In fact, there hasn’t been a non-Democratic mayor of Minneapolis since the 1970s, and St. Paul hasn’t had a Republican in its top office since Norm Coleman, who switched parties from Democrat to Republican in 1996 and left office in 2002. 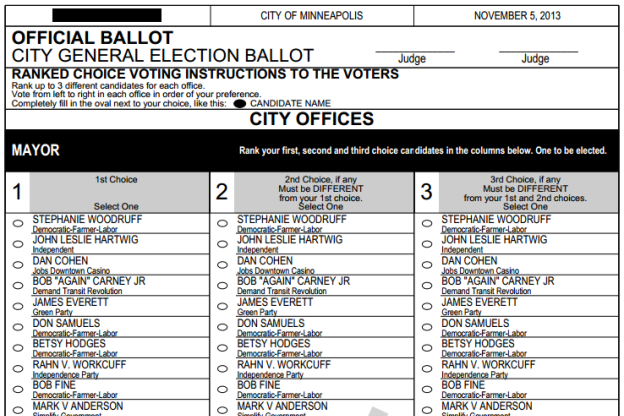 That’s not to say there isn’t any competition among Democrats, though for a good part of the last 20 years there hasn’t been much turnover at the top of the ticket, as relatively popular DFL incumbents Chris Coleman and R.T. Rybak both twice ran for re-election.

Turnout did see a boost in Minneapolis in 2013, when Rybak didn’t seek a fourth term, leaving the mayor’s seat open. Turnout was 10 percentage points higher in the city that year compared to the 2009 election, and Betsy Hodges ultimately won, with 49 percent of the vote to Mark Andrews' 31 percent on the final round of balloting.

This year, several DFLers are challenging Hodges in Minneapolis and Coleman isn’t seeking re-election in St. Paul, factors that are likely to generate more interest and could drive up turnout.

So who does vote?

While many in the Twin Cities don’t vote in city elections, there are some people who are more reliable than others when it comes to voting for mayor.

Phil Keisling, the director of Portland State University’s Center for Public Service and a researcher on the Who Votes for Mayor project, found that the average voter in a municipal election in the U.S. was much more likely to be older than the average city resident and come from a more affluent neighborhood.

The Portland State project didn’t look into voter statistics in Minneapolis, but it did break down who votes for mayor in St. Paul and 49 other cities.

In 2013, it found, the median voter in the St. Paul mayoral race was 15 years older than the median city resident, an age gap Keisling called fairly typical of cities studied. Specifically, the median St. Paul voter was 55 years old, and nearly 40 percent of registered voters age 65 and older voted, compared to 8 percent of those between the ages of 18 and 34.

The highest voter turnout in St. Paul could be found in wealthier neighborhoods along Summit and Grand avenues, in Highland Park, Como and near the University of Minnesota’s St. Paul campus, where turnout approached 30 percent. By contrast, turnout was around 10 percent or lower in the city’s poorer neighborhoods.

“For all the much vaunted role that younger citizens, millennials, whatever you want to call them are playing in the artistic and cultural lives of major U.S. cities, they’re basically deferring to their grandparents’ generation on how that city is run in government,” Keisling said.

Minnesota loves to brag about turnout. But Minneapolis and St. Paul residents are actually pretty bad about voting in municipal elections