If Betsy Hodges is searching for some solace — and she might after what proved to be a rough weekend for the Minneapolis mayor — she need look no further than page 129 of her predecessor’s memoir.

“The first part of the campaign was the toughest,” former Mayor R.T. Rybak writes in his book, “Pothole Confidential,” about first re-election effort. And: “The single worst day was the endorsing convention.”

As in 2005, when Rybak was running for his second term, the delegates who convened at the Minneapolis Convention Center on Saturday couldn’t agree on which candidate to endorse, which leaves a wide-open mayoral election this fall.

And as also happened in 2005, the incumbent mayor this year is under assault by critics and a strong opponent.

Back then, it was Peter McLaughlin, then and now a Hennepin County commissioner, who had more support among delegates than Rybak, though — spoiler alert — Rybak ended up winning a second term quite handily that November and a third four years later, eventually going become one of the city’s more popular mayors.

If Hodges is ever to write a similar comeback chapter about her political career, she’ll have to overcome a similarly rough start. While mutually assured destruction by four strong candidates kept any from being endorsed by the city DFL on Saturday, there was a more imporant takeaway: After failing to win even a quarter of the delegate votes, it’s obvious that the mayor is in a real fight for reelection.

“This is a difficult and complicated process for a lot of people,” Hodges said late Saturday night. “And I don’t think anyone is surprised that there wasn’t an endorsement. There hasn’t been an endorsement in a contested mayoral race in a generation. But this means we can move forward and talk to voters as we head to the general election and I’m excited about that.”

A win for Dehn?

That process included an extremely long wait before there even was a first vote on a mayoral endorsement. The first balloting for the candidates didn’t take place until 7 p.m. — at a convention that was supposed to start at 10 a.m.  Even then it took two hours before that first vote was counted and announced, with the results as follows: State Rep. Ray Dehn got 32.44 percent of the 1,253 voting delegates, Council Member Jacob Frey 27.83 percent, Hodges 24.19 percent and former Hennepin Theater Trust leader Tom Hoch 10.6 percent.

Three other candidates — Al Flowers, Aswar Rahman and Captain Jack Sparrow, along with votes for “no endorsement  — shared the remaining 5 percent. As such, Flowers, Rahman and Sparrow would have been dropped from a second ballot. (Another DFL candidate, Nekima Levy-Pounds, did not seek party approval.)

But that second ballot never happened. After another 90 minutes of hanging around, some backroom deal-making and a brief-but-still-somewhat-bitter debate, the convention was adjourned without an endorsement for mayor.

That came after operatives for Hodges, Frey and Hoch agreed to support the adjournment vote over the objections of Dehn. While he said he doubted he would have gotten to the 60 percent endorsement threshold, Dehn said he thought his share of the delegates would have grown in subsequent votes. That he was denied that opportunity played into his message — that he’s the outsider taking on a party establishment frightened by the incursion of new activists. 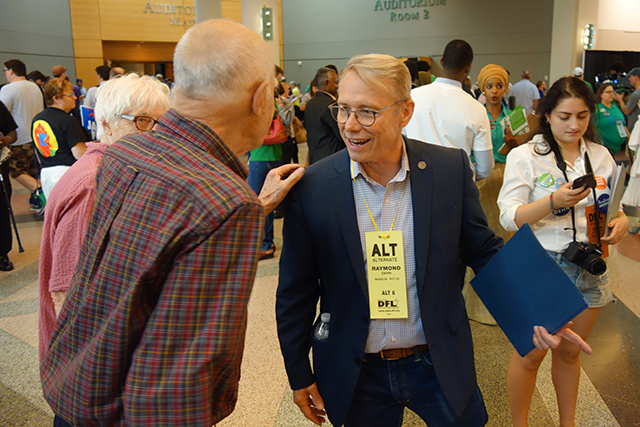 In a long day with few winners, Dehn at least ended it with bragging rights.

And Dehn returned to themes he used in his convention speech: “People want to see a difference in how our government is responsive to them. I think people want someone who will sit down with them and talk about what’s important to people’s lives in our city. “

The Our Revolution effect

City conventions start and end with organizing. The candidates who win are those who have troops in the room during the dozens of precinct caucuses that take place months earlier. That was at least one factor in Hoch’s fourth-place finish.

Then there are organizations who are attached more to a movement than to specific candidates — groups like Our Revolution, which evolved out of Bernie Sanders’ presidential campaign. Dehn was the most obvious beneficiary of Our Revolution at the DFL caucuses in April, and the group’s strength at Saturday’s city convention became obvious even before voting for the mayoral endorsement began.

In the race to get the endorsement for the Minneapolis Park & Recreation Board, 19 candidates were vying for three at-large spots and six district seats, a group that included five incumbents (although one was leaving a district seat to run for an at-large one). By the time voting was completed, all but one of the candidates endorsed by Our Revolution were endorsed. The only one who didn’t win an endorsement was AK Hassan, who ended the night in a close race with Abdi “Gurhan” Mohamed. 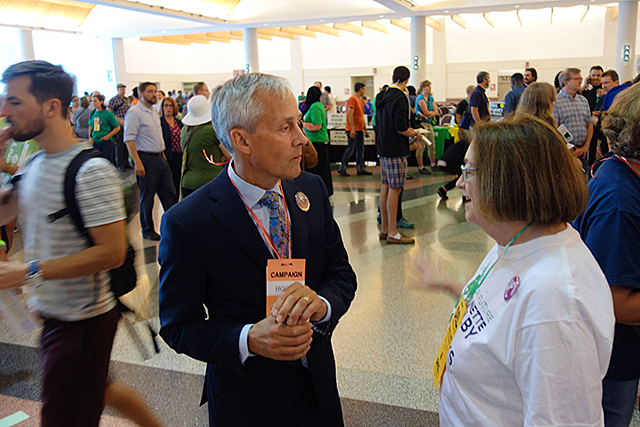 Not endorsed was at-large incumbent Meg Forney, current District 3 incumbent Scott Vreeland (who was running at large in order to make room for a person of color in his seat), and District 1 incumbent Liz Wielinski. All had pledged to drop out if they weren’t endorsed. Four other incumbents are not seeking re-election: Anita Tabb, John Erwin, Jon Olson and Annie Young.

All of which did not portend good things for the mayor. As Hodges delegate and self-described ex-journalist David Brauer tweeted: “Based on the Park Board vote — several incumbents knocked out — I’d be surprised if @raymonddehn wasn’t first place on 1st ballot.”

So what’s the difference between the DFL convention and the November election? Around 78,000 votes. Also, an electorate that is broader than what turned out for the DFL process, which goes from the April precinct caucuses through the city convention.

So if Saturday was the equivalent of a final Spring Training game — where teams get one final look at what they and their opponents have — the regular season starts now. “The question is, what are the conversations we’re gonna have with voters between now and November,” Hodges said.

Dehn said he is frequently asked why voters shouldn’t give Hodges one more chance. “I respond by saying, ‘Do you think our city can have four more years like the past four years?’ ”

Frey and Hoch also pointed to Hodges’ weakness in looking toward the fall election. “We feel great leading into the general,” said Frey. “I’m blown away that 76 percent of the convention voted for a change in direction.”

“This just re-affirms our belief that Minneapolis is anxious for a change in leadership,” Hoch campaign manager Kieran McCarney said in a statement Saturday. “It really shows a weakness in the campaign when an incumbent [is] failing to secure their party’s endorsement.”

One of the putative upsides of Ranked Choice Voting, the candidate ranking system that will be used in the November election, is that candidates will run more positive campaigns. That’s because they don’t want to alienate supporters of rivals in hopes of winning their second- or-third-choice votes.

That may happen, but it wasn’t obvious from those candidates’ behavior on Saturday. Either specific or indirect, by the candidates themselves or their surrogates, there were plenty of shots taken at the convention.

As the incumbent, Hodges bore the brunt of them. Hoch said the mayor has no plan for the city’s growth and prosperity. Frey made a reference to the mayor’s fondness for process: “If you want a mayor who’s just going to start another task force or ward group and call it a result, don’t vote for me.”

But Hodges also punched back.

“Tom Hoch thinks the Nicollet Mall should be on time and on budget when it has been all along, because we are implementing the plan he agreed to as chair of the Downtown Council,” Hodges said. “And Jacob Frey thinks we should come up with a plan to end homelessness in five years when we’re already implementing a plan … to end it in three.” 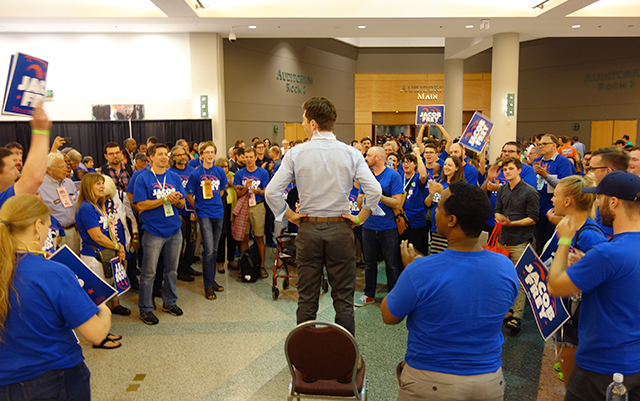 Perhaps anticipating the strength of the Our Revolution delegates, Dehn mostly escaped criticism, though that didn’t stop his surrogates from offering critiques of others. During state Rep. Ilhan Omar’s speech endorsing him, she took issue with a Star-Tribune article published in May on the questionnaires interest groups ask candidates to fill out, which noted that Dehn pledged to veto any ordinances opposed by Our Revolution and agreed to the principle of  “co-governance” with TakeAction Minnesota.

Omar said that as a mother of a black son, she is “more worried about him coming home safe from the corner store than refuting a misrepresentation of a candidate’s commitment to co-governance.”

She followed that with a reference to last week’s dust-up over reports that Frey had accepted a donation from the Police Officers Federation of Minneapolis in 2015, shortly after the police killing of Jamar Clark. “I saw Ray at the 4th Precinct protests listening to constituents and talking about police reform rather than accepting police donations,” she said.

In his own speech, Minneapolis activist Flowers, who is positioning his campaign as an effort to draw attention to the gun violence in his neighborhood, summarized the convention and the coming campaign. “If you don’t endorse me then you shouldn’t endorse anyone,” Flowers said. “Because you should make everybody fight. Make us fight for your vote to the end. And make sure they’re telling you the truth.”

What we learned from the Minneapolis DFL convention