2018 will be a monumentally important midterm election for Democrats: It’s their first chance to put President Donald Trump and the GOP — as well as their own message and brand — to the test at the ballot box.

Democrats believe the president’s historic unpopularity could be a huge boost to their campaign to take back Congress. There’s hopeful talk that they could significantly eat into the GOP’s 23-seat advantage in the House of Representatives — or even claim the chamber altogether.

In the Senate, however — where the GOP holds just a four-seat lead — they couldn’t have been dealt a worse hand. To simply maintain their 48 seats in the Senate, Democrats will have to run the table in a slate of red states where incumbents are up for re-election, including Trump-loving North Dakota and West Virginia.

Even though many Democratic incumbents don’t even have challengers yet, the party has begun gearing up for a fight. Minnesota’s two Democratic senators have already contributed in a big way. Through political action committees that spread campaign cash to allies, Sens. Al Franken and Amy Klobuchar have begun filling their colleagues’ war chests for the intense election season that lay ahead.

If history is a guide, Democrats should be riding high right now. Midterm elections are usually bad for the party in power: 1994, 2006, 2010, and 2014 saw the party out of the White House either take a congressional majority or consolidate one.

Of the 25 Democrats defending their seats, 10 are in states that Trump won. Some represent states that the president just narrowly won, such as Sen. Tammy Baldwin of Wisconsin and Sen. Debbie Stabenow of Michigan.

Incumbent Democrats also face tough races in Missouri, Florida, Indiana, Ohio, and Montana, which all went for Trump by double-digit margins, or close to them.

While the party is forced to play defense around the country, Democrats have few opportunities to play offense: Most of the seats the GOP is defending are in safely red places like Mississippi, Wyoming, and Nebraska.

Only one Republican incumbent is running in a state won by Hillary Clinton: Sen. Dean Heller of Nevada. The Democrats’ next best shot at a pick up is unseating Arizona Sen. Jeff Flake, whose state went for Trump by four points and is facing heat from both his left and his right this year. Even if they were to win those two races and retain all their other seats, Democrats would be tied with Republicans, 50-50, with Vice President Mike Pence holding the tiebreaker.

Franken and Klobuchar distribute the dollars

Election Day is more than 16 months away, but the Democrats’ precarious situation is requiring well-positioned senators to step up and help their endangered colleagues. If early campaign finance reports are any indication, Franken and Klobuchar are heeding that call.

In recent years, Franken has emerged as a top fundraiser for Democrats, and he is not up for re-election until 2020, freeing him up to support other Democrats. Klobuchar, a member of Senate leadership and another big-time fundraiser, has her own re-election contest in 2018, though that race is not viewed as a top priority for the GOP. 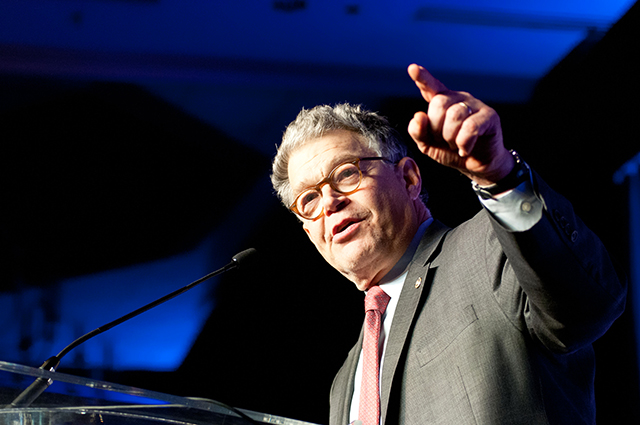 Both PACs donated a combined $25,000 to the Democratic Senate Campaign Committee, the party arm that oversees all Senate races and blankets states with negative ads come election season.

Klobuchar and Franken’s contribution activity for the first half of 2017 outpaces their activity at this point in 2015, an election cycle in which neither were up for re-election, and Democrats were confident they could take back the Senate.

There are a few reasons Franken and Klobuchar are giving more and earlier to Democratic candidates, according to Gordie Loewen, a longtime DFL campaign operative.

For one, this bad map, and the prospect of losing seats, can be a big motivator to do more. “What you’re seeing is the difference between a good map with room to grow and a tough map with only a few places to go,” Loewen says.

Beyond that, they are donating to colleagues they know and, as is often the case, like. “It’s easier to invest in someone you know and someone who has a track record,” he says, instead of challengers they may not know as well.

This early flush of cash from the likes of Franken, Klobuchar, and other senators has practical benefits for candidates, but it also demonstrates a campaign’s viability early on — and could help scare away potential challengers.

Many factors influence whether someone decides to run for office, but a potential opponent’s fundraising pace is certainly one of them, says Loewen. Strong fundraising numbers for a few quarters, he says, could convince a prospective candidate that they may not be able to keep up.

Though it’s early, some high-profile Republicans, once expected to run in 2018, have decided to pass on this cycle. Two GOP House members from Missouri, Ann Wagner and Vicky Hartzler, were considered likely to challenge the incumbent McCaskill — both declined. In Wisconsin, U.S. House Rep. Sean Duffy has passed on challenging Sen. Baldwin.

For the Senate Democrats under siege, the perception of momentum — often judged by campaign cash — is important to maintain, with the stakes being so high.

“I think both our senators are good team players,” Loewen said. “I think they both realize that now more than ever, there’s an urgency to this. It’s more important to be a team player in the time of resisting Trump.”