On a steamy July afternoon, a handful of Washington Democrats traveled out to Berryville, Virginia — a town of about 4,000, 50 miles outside the Beltway — to announce something to working American people: President Donald Trump and the Republicans are ripping you off. We have a better deal.

Describing an era where working Americans are increasingly getting squeezed by economic forces beyond their control, Schumer derided Wall Street and special interests in framing his party’s fresh message. “We are here today to tell the working people of America: Someone has your back,” the New York senator said to applause.

Kicked out of the White House, in the minority in Congress, and losing grip on statehouses nationwide, Democrats have spent 2017 reckoning with their failures and trying to chart a new way forward, one that offers voters something beyond acid criticism of Trump.

If A Better Deal is their roadmap, Democrats are looking to bank on the populist sentiment Trump rode to the White House, but with a focus on jobs, the minimum wage, and fighting corporations to help ordinary Americans — and maybe, just a bit about the deal-maker-in-chief who Democrats argue has reneged on his populist promises.

Democrats have been consumed with Trump since his election: They have fought the GOP’s plans to repeal and replace the Affordable Care Act, while raising alarms over his campaign’s ties with agents of the Russian government — and steps he allegedly took to rein in that investigation when in office.

But Democrats say that just running against Trump won’t return them to power.

“It’s helpful for the American people to hear a positive economic message as opposed to just negative,” said Klobuchar. “People are getting tired of just negative.”

A year and a half away from the critical 2018 midterm elections, Democrats are rolling out A Better Deal to give voters an idea of what they are for, as they seek to reduce Republicans’ majorities in the House and Senate.

Though elements of the platform have yet to be specified, the policy that’s there now represents the current state of the party: a mix of specific initiatives long touted by the Democratic establishment, and progressive policies made mainstream thanks to Sen. Bernie Sanders’ insurgent candidacy for president in 2016. 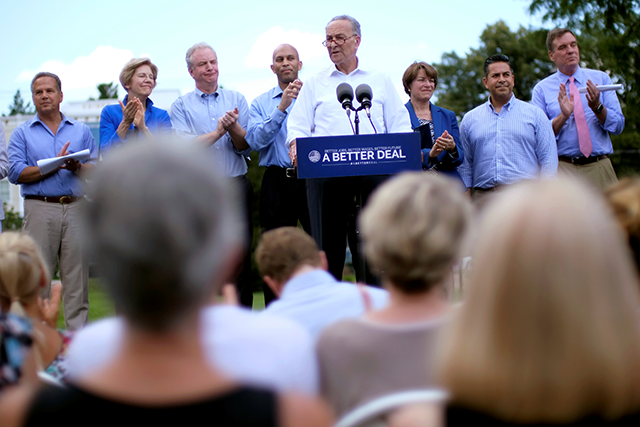 One of the platform’s themes — “build an economy that gives working Americans the tools to succeed in the 21st century” — emphasizes creating incentives, such as tax credits, for businesses to invest in boosting their employees’ skills. It’s the kind of pragmatic, think-tank-approved policy that was a hallmark of Barack Obama’s administration.

Sanders’ fingerprints are elsewhere — most notably on the platform’s call for a $15 minimum wage.

There are also items nearly all Democrats can get behind. A Better Deal calls for a $1 trillion package investing in infrastructure, for example, along with expanding family and sick leave. It also proposes reining in high prices for prescription drugs by letting Medicare bargain directly with pharmaceutical companies, as the Veterans’ Administration does.

There is a plank devoted to countering the negative effects that corporate consolidation has on consumers. Klobuchar, the top Democrat on the Senate Judiciary Committee’s panel on antitrust, introduced this section at the announcement in Virginia.

Democrats say that what they’ve released is so far just the foundation of their platform. Klobuchar said that the party will continue to introduce policies, including some new ones; she mentioned a policy regarding the so-called “gig economy,” which has little regulation on the federal level.

Trying to ‘unrig the system’

To some Minnesota Democrats, A Better Deal is a good first step in making the case to voters that Democrats are with them. Fourth District Rep. Betty McCollum said, “The American people need to know that Democrats stand for putting the middle class and hard-working families first, not coming up with tax legislation that lines the pockets of the one percent.”

“Too many people believe, and rightly so, that the rules of the economy are against them,” Klobuchar said, citing things like rising prescription drug costs. “We’re trying to bring some balance back. We think that’s better for the economy and for the people who work in the economy.”

“We thought it was very important that we put out an economic agenda for America early on,” she said, “and we didn’t spend our time talking about Donald Trump.” 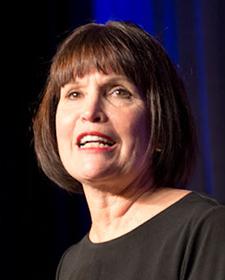 Sen. Al Franken said “It seems like the economy is rigged … that’s what most people are angry about,” he said. “What we’re trying to do is to unrig the system, and try to build a middle class.”

The Minnesotans’ usage of phrases like “one percent” and “rigged” are evocative of Sanders’ populist brand. Those who cover the progressive left, like Vox’s Jeff Stein, say that A Better Deal is a step in the Sanders direction.

“My first-blush response is, this isn’t horrible,” Walz said of the platform, adding, “I understand it says something about my expectation that it wasn’t going to be very good.”

To some on the progressive left, A Better Deal is not enough of a step in their direction. They frame a Better Deal as a warmed-over serving of centrist policy that, despite its populist tone, does not address the root causes of wage stagnation, income inequality, and other ills.

Democrats, Tasini argues, continue to show voters that they’re not much different from Republicans, and will keep losing elections unless they take a different path. “Until the Democrats get this message, they might as well have a slogan closer to ‘Better Hygiene, Better Grammar, Better Front Lawns.’”

Will it make a difference?

In any event, Democrats have their work cut out for them. According to a Washington Post poll, over half of Americans think the party only stands against Trump, not for something. Though polls show voters prefer a generic Democratic candidate for Congress over a Republican one, a May poll from Gallup gave Democrats a 40 percent approval rating, down from 45 percent in November.

Some Democrats say they have a trust issue with voters, one that won’t get worked out with better talking points. “People don’t believe we’re on their side, for whatever reason,” Walz said.

“If you think it’s just about the message alone, I don’t think you’re going to get there,” he said. “A lot of folks, especially in rural areas, that simply did not believe [Democrats]. … To get them to believe is going to take more than just talking points.” 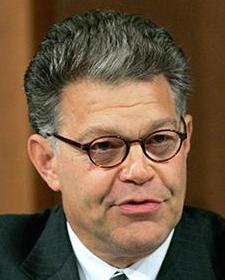 Franken added that Democrats, who many people associate with the elite, have a perception problem. Voters, he said, “don’t have a lot of faith in Congress, and don’t think Congress is looking out for them. We have not effectively made the argument that we are,” he said. “In putting out this agenda, we’re telling them what we’re for and now what we’re against.”

Will Democrats prevail if people, finally, know what they stand for? Some, like the Washington Post’s Aaron Blake, point out that Republicans won big in the 2010 and 2014 midterms by running hard against Obama — not by hand-wringing over what their overarching economic message was.

Even in their economic vision, Democrats find it hard to escape Trump — it’s evident in the name of their plan, according to Steven Schier, professor of politics at Carleton College. “That’s implicit in the framing,” Schier says. “We’re going to out-Trump Trump. A better deal than Trump can give you.”

Democrats say they can criticize Trump and advance an economic agenda at the same time — in fact, they might go hand-in-hand. Franken suggested their agenda serves to highlight the president going back on his promises to voters.

“He hasn’t been doing what he promised to do,” he said. “The health care bill that he had a celebration for in the Rose Garden cut Medicaid by $800 billion, and virtually all of that went to families above $250,000 in income. He said he wouldn’t cut Medicaid. That’s not what he’s done.”

“I think this will be the most important thing we do,” Klobuchar said of the platform. “Politics is about improving people’s lives. … There’s no reason you can’t do both.”