In March, when the city and the Minneapolis Downtown Council kicked off a promotional campaign aimed at easing concerns over the Nicollet Mall redo, they promised that the two-year, $50 million construction project would be “substantially complete” by November.

The result, not surprisingly, was that media and project critics focused more on the “substantially” part than the “complete” part.

Was the city fudging on a promise to have the project finished for Christmas shopping? Would restaurants and retailers face even more disruptions than they had already lived through?

No matter how project leaders responded — that things were on schedule and that the average pedestrian wouldn’t notice the few trees and plantings that wouldn’t be in place until the spring of 2018 — the message got muddled. Even after Mayor Betsy Hodges had to repeat (over and over) that the third iteration of Nicollet Mall was on time and on budget and would be worth the time and money, a lot of people spent a lot of time discussing the meaning of “substantially.”

So when the city’s engineering staff and its arts administrator gave another tour of the project Tuesday, the only time that the provocative phrase was mentioned was when members of the news media asked about it.

Don Elwood, the director of transportation, engineering, and design for the Minneapolis Public Works Department, has been working on the project for four-plus years. When he heard the question Tuesday about whether the project would be complete, substantially complete or not complete by the holidays, he said: “I’ve been in this business a long time. It will be complete.” 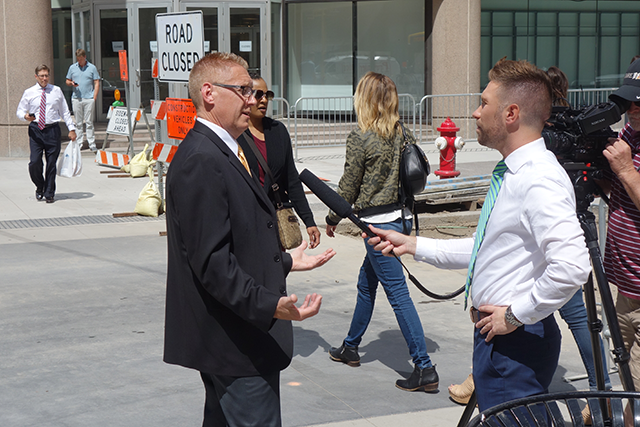 MinnPost photo by Peter Callaghan
Don Elwood, director of transportation, engineering and design, being interviewed during Tuesday’s walk-through of the project.

Later, he explained that “complete” means different things for different players. For residents using the mall, it will look and feel complete. But for an engineer like himself, it could take a little longer — until he sees all the tree wells filled and the landscaping finalized. In fact, he’ll continue on the project for two more years, even after the ribbon is cut in mid-fall through a warranty period for contractors that assures work is done right.

During the walk-through Tuesday, however, Elwood noted that the work on the surface of Nicollet Mall, is mostly done: the etched pavings; the curbs and elevated intersections; the traffic lanes; the intersections at 3rd, 6th, 7th and 9th streets; and the planting of more than 100 of a planned 240 trees. (The intersections at 4th, 8th and 10th streets will be finished by Labor Day.) 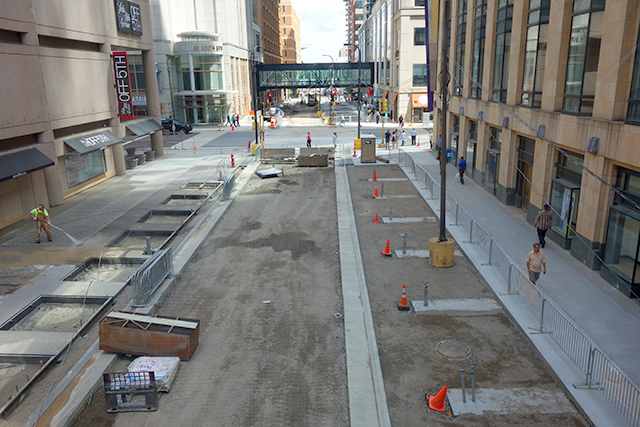 MinnPost photo by Peter Callaghan
A view of Nicollet Mall from a skyway bridge.

Another surface element included in the new design: sidewalk icons that mark building fronts that provide access to skyways. It is an effort at “wayfinding” that became a priority after an earlier design element — a set of stairways from the mall to the skyways — was nixed by building owners.

Some of the artworks that were removed — including the refurbished Sculpture Clock, which was part of the first iteration of Nicollet Mall — will soon be reinstalled. The light poles that will carry both pedestrian and traffic lighting will come near the end, allowing for the unsightly temporary light poles and power lines to be carted away.

The design for the new Nicollet, by James Corner Field Operations of New York, divides the mall into sections known as the Woods to the south, Nicollet Center and the Groves. “Each block is tied together, but each has its own unique character,” Elwood said.

The construction work is now concentrating on vertical elements — i.e. things that stick up out of the ground — that are features of what’s being called the Light Walk and the Art Walk. The Light Walk includes metal canopies that pedestrians can walk under and that vendors might use during farmers markets, while the Light Walk will support mirrors and LED lights that can change color or respond to music. 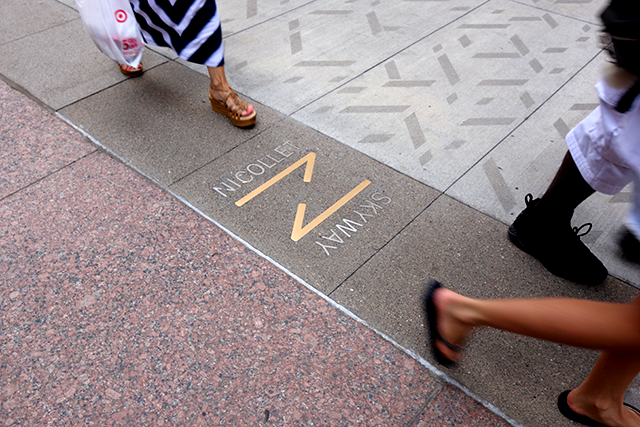 On Tuesday, a large work by Ned Kahn, “Prairie Tree,” was being installed with the help of a crane. Kahn also did the Wave Wall on the west wall of the parking ramp next to Target Field Plaza, and the new piece has similar metal pieces that will catch wind and light. It is one of three new artworks commissioned with the project’s $1 million art budget.

“It’s a different mall, and I think that will begin to show as the vertical elements are installed,” Elwood said.

When will it end?

This third version of Nicollet Mall has been plagued by complaints, of course — chief among them that it has taken too long and that it has cost too many businesses customers, and it has already become an issue in the 2017 mayoral campaign.

The initial work, started in 2015, was mostly on utility lines below the surface, and the project only moved to the hardscape and landscape phases earlier this year. Because the construction plan included two winters, the city staff and contractors tried to schedule the work so as to be the least disruptive to businesses. 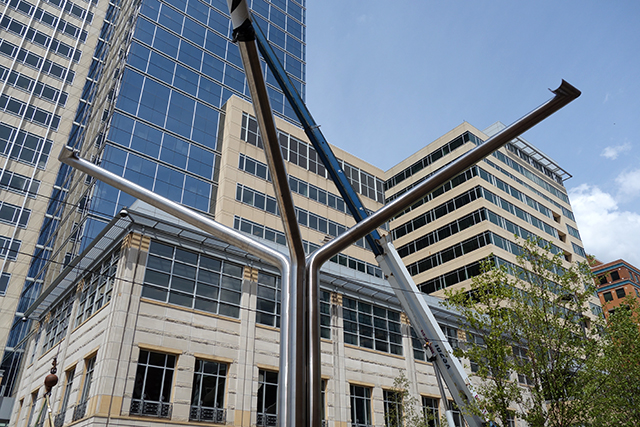 But the sense that the project is only plodding along persists. When city Public Arts Administrator Mary Altman was showing renderings of “Prairie Tree,” a man riding by stopped to ask what was going on. When told the city was talking about when it would be finished, he guessed the answer.

November, he was told.

Elwood has heard all the complaints, but he reiterates that the project was a 12-block, building-front-to-building-front rebuild with 10 intersections that had to remain open; with dozens of businesses that had to maintain access throughout the construction process. “That’s a lot of people coming through this job site every day,” he said. “At the end of the day, we were able to keep everyone open all the time.” 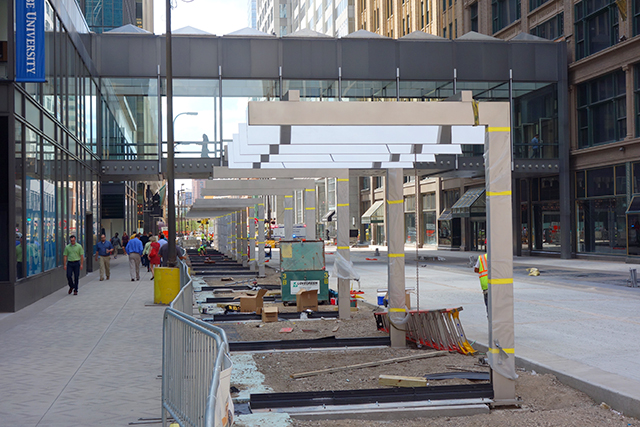 MinnPost photo by Peter Callaghan
Supports for what project designers have dubbed the Light Walk will hold angled mirrors and LED lights that can change color and react to music.

The project was funded by a $21.5 million 2014 state bonding bill, $3.5 million from the city of Minneapolis and $25 million in special assessments from property owners downtown. Ongoing maintenance and programming will be paid for by the Downtown Improvement District, which raises money from assessments on building owners.

This is the third version of the mall, for which James Corner Field won the 2014 design competition. The first version of Nicollet Mall was completed in 1967 and designed by Lawrence Halprin and Associates of San Francisco, while the second was unveiled in 1990 with a design by BRW Architects.