Keith Downey has been involved in Minnesota politics for nearly a decade, first as a state House representative and most recently as a two-term chairman of the Republican Party of Minnesota.

But he’s running for governor of Minnesota in 2018 with a different message: He’s an outsider who will shake up state government. In campaign materials, Downey talks about his time as a business and information systems consultant who saw a “corrupt and broken” system in St. Paul. He ran for the House and unseated a Republican incumbent, coming in as a “government reformer.” At the debt-straddled state party, Downey said he came in to turn things around.

“I ran for the House against an 18-year incumbent Republican. I was the outsider that time, and I saw him as part of the problem and not the solution, “Downey said. “I proposed a lot of bold ideas.”

Downey’s pitch to voters and activists is not surprising in the growing Republican field vying to be Minnesota’s next chief executive. In the 2016 election, multibillionaire real estate mogul and television personality Donald Trump danced around more established Republican candidates to secure the party’s nomination. He went on to defeat Democrat Hillary Clinton, the former first lady, U.S. senator and secretary of state who was easy to pin with the political insider status. He did that with a message of challenging the order of things in Washington, D.C., and his rally cry to “drain the swamp.”

“That’s what people saw in Donald Trump, was someone who had the will and abilities to make those changes,” Downey said. “Those appetites are still out there.”

Trump’s strategy seen as a possible path to statewide office

Trump’s strategy worked well in Minnesota, too, where Clinton beat him by less than 2 percentage points.That’s significant in a state that’s swung heavily for Democratic presidential candidates since 1972. Clinton won Minnesota with nine of the larger, more populated of Minnesota’s 87 counties, while Trump captured turf in the typically DFL-friendly Iron Range.

For Republicans, it’s shown a possible path to winning a statewide office in an open race, something they haven’t managed to do in Minnesota since 2002. His success has inspired several Republican candidates to file for the governor’s race, while others are channeling Trump with a more populist campaign message, promising to break up the establishment in St. Paul. 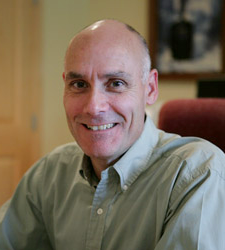 “The Republican base is no longer just the country club, Chamber of Commerce-type of voters, it’s the blue-collar, rural, working-class voters that are being drawn in more and connecting more with the Republican message,” Gregg Peppin, a longtime Republican political operative, said. “I think it reflects Minnesota being more in play in statewide races. There’s this realization, and we’re probably a little bit later to this realization than some other states.”

Trump is by no means the first outsider to break into politics. His successful candidacy follows plenty of other outsiders in political history. In the 1992 election, American business magnate Ross Perot’s independent candidacy for president earned him 19 million votes, or nearly 18 percent of the vote. When Dwight D. Eisenhower was sworn in as the 34th president of the United States, the career soldier had never held any other elected office. There was no benchmark yet, but even America’s first president, George Washington, an Army general, would be considered an outsider by today’s standards.

In Minnesota, former pro wrestler and actor Jesse Ventura is the most prominent outsider candidate, who ran in the 1998 governor’s race as a Reform Party candidate against two established political names: The former St. Paul Mayor Norm Coleman, a Republican, and DFLer Skip Humphrey, the son of former Vice President Hubert Humphrey.

Like Trump, few thought Ventura stood a chance, even as he began to dominate media coverage with his message of pushing back on special interests. He won by drawing first-time voters to the polls, particularly younger white men.

“There have always been people trying to play the outsider card in politics, but with populist candidates, it’s really about how they come across,” Peppin said. “It’s one thing to talk populism and taking the government back to the people, but if it doesn’t come off as credible it falls on deaf ears.”

Former Republican House representative and current Hennepin County Commissioner Jeff Johnson is making his second run for governor, after losing to Gov. Mark Dayton in 2014, and he doesn’t call himself an outsider.

“I think I could try and call myself an outsider and try and pull that off, but I don’t think that’s honest,” he said. He’s sees value in his experience in politics combined with his years running a small business, Midwest Employment Resources, which provides human resources training and workplace investigations.

“I think people generally appreciate some experience in government as long as you can show you’ve done something good with that and you can combine it with life in the real world,” Johnson said.

But he is running on a populist message not unlike Trump’s to bring government back to the people. In a not-so-subtle video announcing his campaign, Johnson walks into a party of people sipping champagne and eating hors d’oeuvres and stops a record playing jazz music. He describes St. Paul as “Minnesota’s own swamp of cronyism and political favors” and promises to — literally — break up the party. 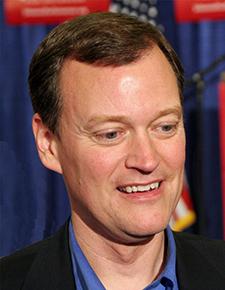 “The attitude in government right now is to control and direct people as opposed to serve people,” Johnson said. “Whether it’s the DFL or Republicans, I think that’s a problem and I think people want that to change. That’s something Donald Trump certainly spoke to.”

“He looked right at me and said, ‘It is time for new blood here in Minnesota and it’s your responsibility to drain the swamp,” Chamberlin wrote on his website. “That is exactly what I intend to do.”

Another Trump in the wings?

But some Republicans are still waiting for a major high-profile outsider to jump into the governor’s race, in particular someone from the business world with a similar message and profile to Trump. Republicans have tried to recruit My Pillow CEO Mike Lindell, who recently traveled to the White House to meet Trump.

“I think we’ll definitely have more candidates jump into the race,” said Republican Party Chairwoman Jennifer Carnahan, herself a businesswoman and newcomer to the party who surprised everyone earlier this year when she beat several more established candidates for the chair job. “When we look at Republican candidates who are running for statewide races, what is very positive and interesting is a lot of them do come from very different backgrounds and have very different perspectives.” 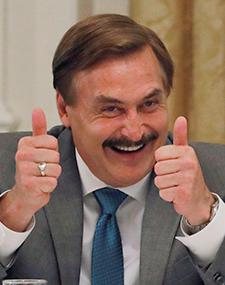 But by the time the 2018 election comes around, some candidates might be actively trying to avoid a Trump-like message, said Steven Schier, a political science professor at Carleton College. Just seven months on the job, Trump’s administration has been plagued with leaks, administrative shake ups and bad headlines related to the ongoing Russian election interference investigation. The latest Rasmussen Reports poll showed only 38 percent of likely voters approve of Trump’s job performance, lower than even President Barack Obama’s lowest approval rating during his eight years in office.

“I think 2018 is almost impossible to predict right now, especially with all of the problems with both Trump and the Democratic Party,” he said. “The key is finding a message that can really capture those disaffected voters on both sides. They are trying to capture some of the lightning in a bottle that Trump did in the state.”

Outsiders, swamp drainers: How GOP candidates are positioning themselves for the governor’s race