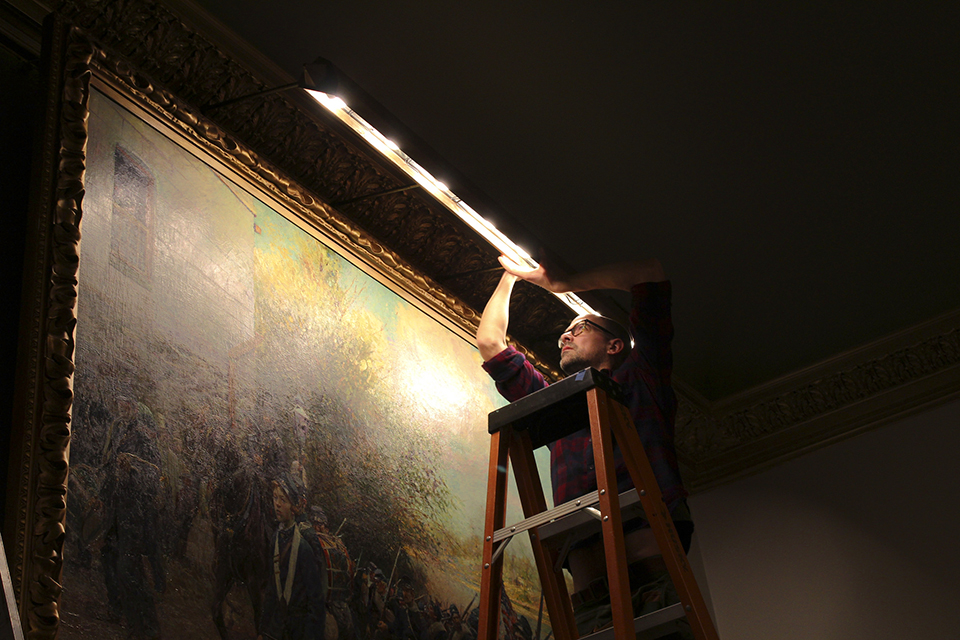 In some ways, the Minnesota Capitol was the state’s first public art museum.

When the building opened in St. Paul in 1905, it would still be another decade before the Minneapolis Institute of Arts moved to its current location. Private, invitation-only art galleries were more common back then: The Walker Art Center was still just a personal collection in the home of lumber baron Thomas Barlow Walker.

But the Minnesota Capitol was designed to showcase art. Architect Cass Gilbert created giant open spaces in the hallways, chambers and rotunda, public places he filled with works created by some of the most prominent painters of the time. Today, with so much art for public consumption, it’s easy to forget the significance that early art held for the state and its citizens.

“It wasn’t like you had a lot of art museums, so this was the place the public would come for culture, to see fine art and classical art,” said Brian Pease, the Minnesota Historical Society's Capitol site manager. “That’s an important element that sometimes gets overlooked because it’s a government building.” 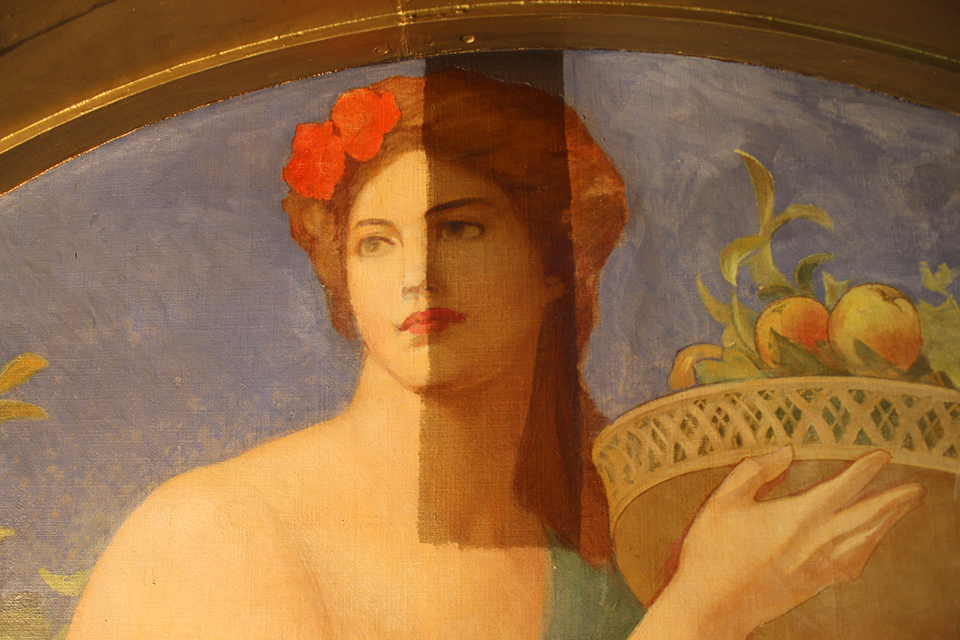 Courtesy of MN Dept. of Admin. Cathy Klima
An untreated portion of a lunette above the East Grand Stair showing the level of discolored varnish and grime that accumulated over 100 years.

When the Capitol hosts its grand reopening ceremony Aug. 11 through the 13th, the art will be as prominent as it was more than 100 years ago. As part of a three-year, $310 million restoration project, a total of 57 damaged and faded murals were restored across the building, while other large-scale historic works were rehung with new lighting — and in some cases, new interpretations. And though some of the art prompted lengthy debates over how to portray a state that now includes far more women and racial minorities, the refurbished building once again reflects one of its original purposes: to make citizens to look up — and maybe learn something.

Much the focus on art is due to Gilbert. Back in the early 1900s, the architect was part of a class of professionals who were heavily influenced by the 1893 World’s Fair in Chicago, which championed the revival of the Italian Renaissance, a style that used classical and allegorical art to educate people and tell a story.

“Nothing will give the building greater distinction or lend more to its educational value and to the evidence of the advancement of civilization and intelligence of the State than the recognition of the arts as represented by the great painters and sculptors of the present day,” Gilbert wrote in a 1901 report. “I unhesitatingly and strongly recommend that ample provision be made to decorate the building with mural painting and sculpture.” 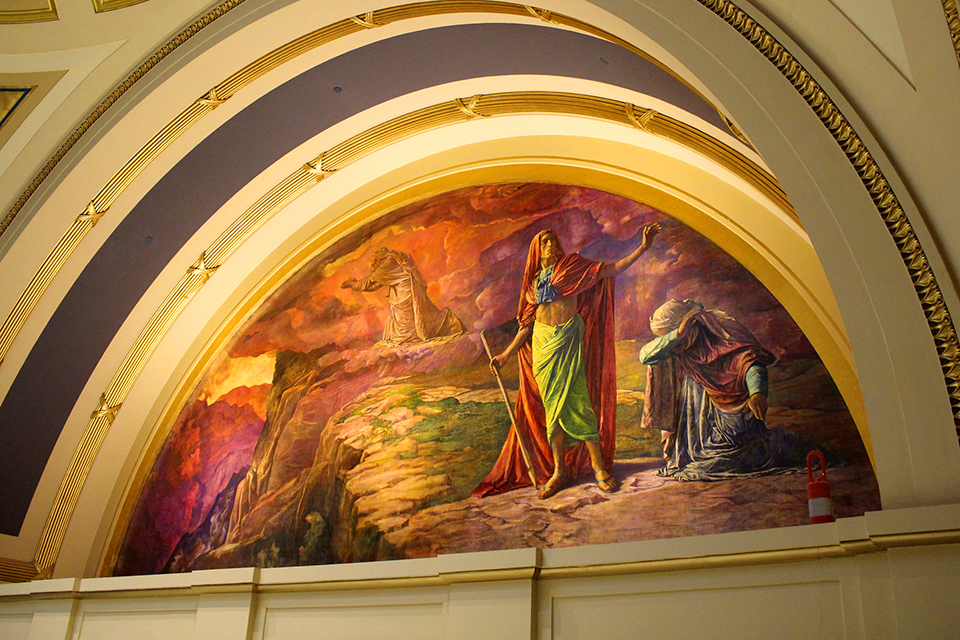 Courtesy of MN Dept. of Admin. Cathy Klima
“The Moral and Divine Law” is one of the four murals brought back to their original colors in the Minnesota Supreme Court Chamber.

That influence is seen everywhere in the Capitol, but especially in the rotunda, the grand public gathering space in the center of the building with paintings that reach to the top of the self-supporting dome. Four of the largest paintings in the space, part of a series called "Civilization of the Northwest," show a young man guided by wisdom and hope as he travels westward, learning to grow crops, appreciate culture and live a prosperous life.

Near the building's west and east grand staircases, visitors' eyes are now drawn to huge skylights and 12 different lunette paintings showing the workers and industries that made up Minnesota’s economy at the time of the Capitol's original construction. The House and Senate chambers are also covered in art, the most notable of which are two massive, 32-foot murals in the Senate chambers created by renowned artist Edwin Blashfield, who is best known for painting the murals in the rotunda of the Library of Congress.

In the ornate governor’s reception room, four massive paintings tell the story of Civil War battles in which Minnesotans played critical roles. One of those paintings, “The Battle of Nashville” by Howard Pyle, is widely considered one of the best paintings of a battle ever rendered. 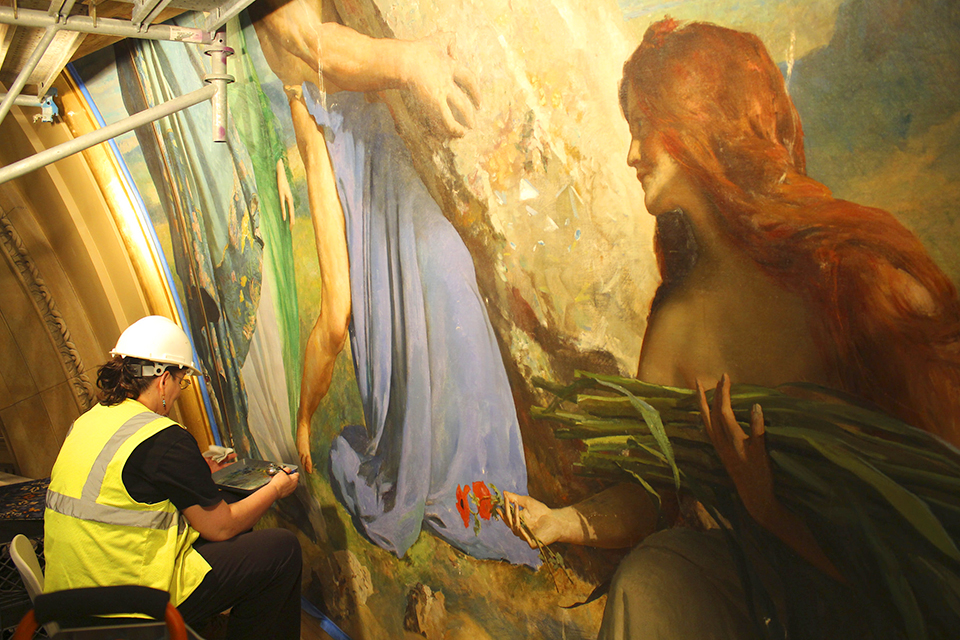 Courtesy of MN Dept. of Admin. Cathy Klima
Conserving one of the murals in the Capitol Rotunda.

In the Capitol's east wing, the historic state Supreme Court Chambers include four murals that were created to educate citizens about the tenets of the law. One shows Moses receiving the law on the mount, while another depicts Confucius writing down the law. Two paintings explain the conflicting interests between church and the law, as well as the individual citizen’s relationship to the state. Painted by John La Farge, the Supreme Court paintings were the most expensive paintings commissioned for the building, each costing about $10,000 in 1905.

“They are wonderful. They are probably among the most valuable pieces of art in the Capitol,” said former Supreme Court Justice Paul Anderson, who served on a Capitol Art subcommittee. “Somebody once told me if they got hold of those La Farge paintings they would probably build a $5 or $6 million museum just to show them.”

Gilbert's design also included a significant initial investment for commissioned art: about $300,000, or 7 percent of the total project’s budget. Over the years, of course, more art has been added — gubernatorial portraits, busts, plaques and statues — and today, the Capitol is home to nearly 150 pieces of art.

Estimates of the value of those works have generated some eye-popping numbers. Ted Lentz, head of the Cass Gilbert Society, at one point estimated the value of just 17 pieces of Capitol art at nearly $1 billion (though there’s plenty debate over how to value art that is designed for a specific place like the Capitol). 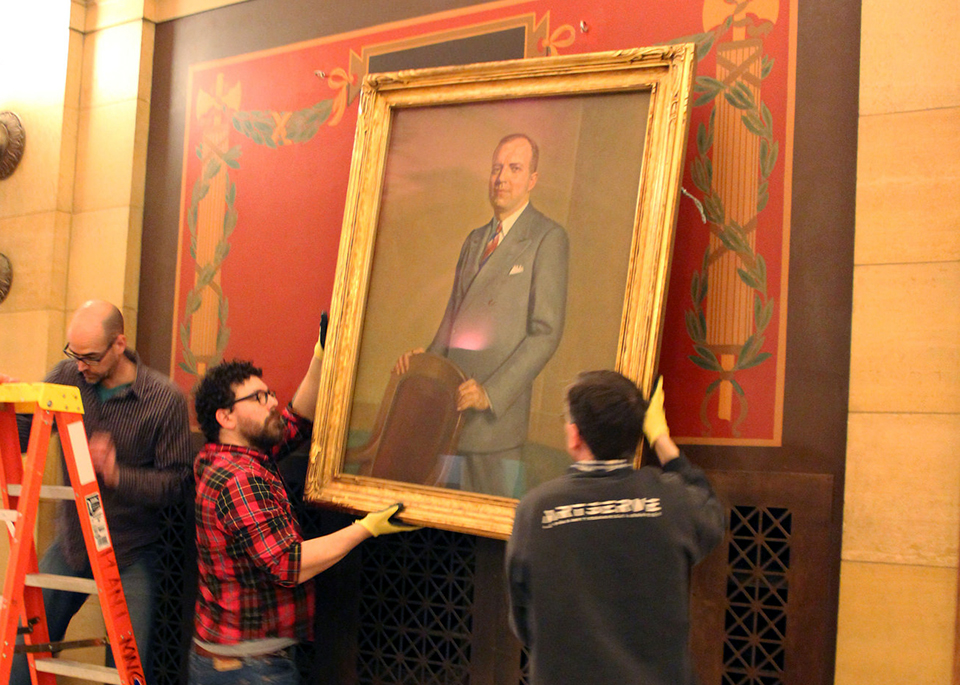 Courtesy of MN Dept. of Admin. Cathy Klima
Gov. Harold Stassen's portrait being removed in 2014 for storage in a climate-controlled facility.

There’s no dispute, however, over how much it cost to restore art across the building: $4 million, or about as much as it cost to build the entire Capitol in 1905.

Evidence of the restoration work is everywhere. Over a 15-month period, decorative painters and conservators did all of the delicate work, removing layers of grime on some of the artwork, the product of a time when people could still smoke in the building. In other cases, water damage ripped through murals, eliminating or warping entire sections of paintings. In an effort to keep artists employed during the Great Depression, the state hired painters in the 1930s to paint over a lot of the murals around the Capitol. All that paint had to be removed.

“It’s amazing that the conservators could actually get all the work done in the time that they had,” Pease said. “To get that new paint off the old paint they used knitting needles and bone folders, anything with a sharp tip, and they just chipped away, inch by inch, to get to the original.”

Beyond the murals and large paintings, every surface of the Capitol is covered in decorative painting, and all of it had to be touched up or completely redone. 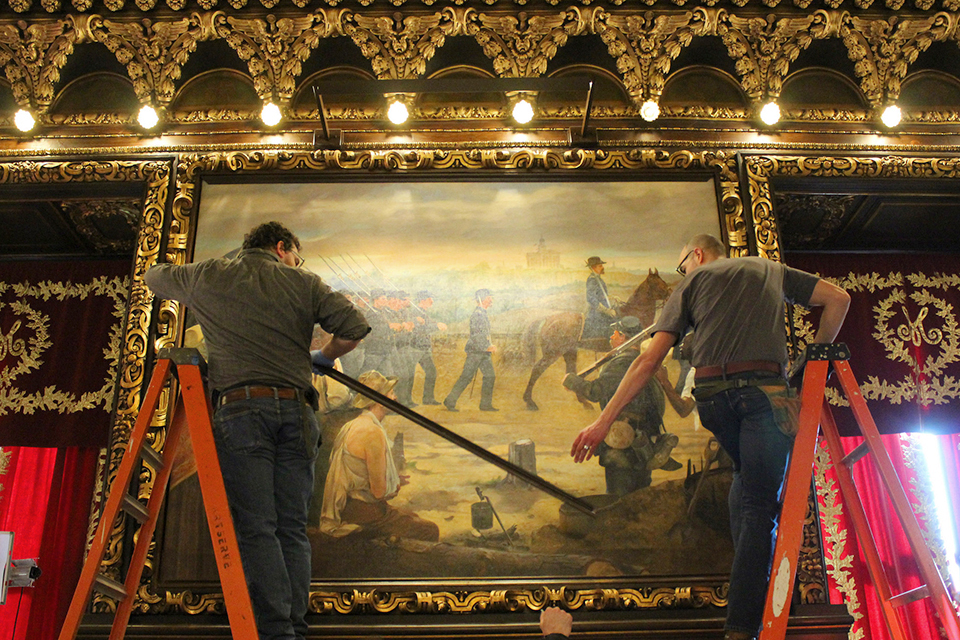 The restoration has been rendered more dramatic thanks to the installation of brighter LED lighting — and the discovery of six skylights throughout the building that had been covered up at some point in the state’s history. “Everything is so much brighter than we would have seen it two or three years ago,” Pease said. “The whole building really comes to life, and these paintings can finally be seen as they were intended.”

After some debate, visitors to the reopened Capitol will see all 38 governors' portraits hanging on the walls, now organized chronologically throughout the first and ground floors of the building. The portraits also have new interpretive plaques next to them to explain what each governor did during his time in office.

Another major debate was over what to do with the paintings in the governor’s reception room. Though the four Civil War paintings were all restored and put back into the room, there are now two empty spots where paintings once hung. The works once displayed there are considered controversial by the Native American community and have been moved to a new space in a meeting room on the third floor of the Capitol. 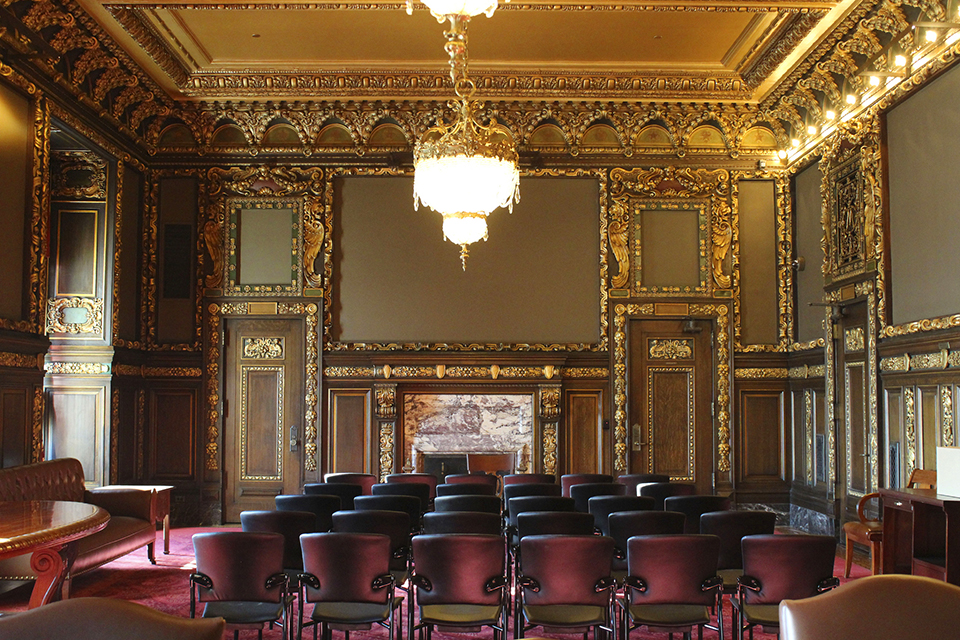 Courtesy of MN Dept. of Admin. Cathy Klima
The space behind the podium in the Governor's Reception Room stands empty following the removal of "Treaty of Traverse des Sioux."

One of those paintings, the "Treaty of Traverse des Sioux," is a warm portrayal of the 1851 signing of a treaty that secured some 22 million acres that would make up much of the future state of Minnesota. For white settlers in Minnesota, the treaty was a milestone. For the Dakota people, it was something else; nearly all their land was lost after Territorial Gov. Alexander Ramsey pressured them to sign the treaty quickly.

The other painting, "Father Hennepin at the Falls of St. Anthony,” shows an explorer and priest sitting with five members of a Dakota tribe, including a bare-chested woman. The painting has been criticized as a naive and skewed portrayal of Native American dress during that time period.

“One view is: You keep the paintings where they were originally, you keep them in there the way it was meant to be,” said Joe Horse Capture, a longtime art curator and member of the A’aninin tribe of Montana. “The other side is, well the state of Minnesota is a lot more diverse than it was in 1905. Native Americans were not legally citizens back then and women were not allowed to vote. This is only one side of the story.”

Horse Capture, now director of American Indian Initiatives with the Minnesota Historical Society, was brought on to develop a new way to present these two paintings in the new space. He conducted interviews with tribe members, art historians, lawmakers and settler descendants to present multiple perspectives on the two paintings, all of which will be displayed near the paintings in the new space.

“What we did is bring these multiple voices together, we want to provide the visitor the opportunity to explore these different avenues,” he said. “It helps put these paintings in a larger context.”

Other offensive paintings won't return to the Capitol, at least not immediately. That includes the Battle of Killdeer Mountain, which depicts an incident that historians tend to describe as less a battle and more of a slaughter of 150 Native Americans. Another painting, the “Attack on New Ulm” portrays one incident during the U.S.-Dakota War of 1862 that not all Dakota supported. Together, there was concern that the paintings formed the building's most prominent portrayal of Native Americans, people who lived in Minnesota for more than 10,000 years before white settlers arrived. (Starting in September, the “Attack on New Ulm” will be displayed at the James J. Hill estate in St. Paul.)

There’s also an ongoing debate about what to do with the open space in the governor’s reception room. Anderson said that’s a conversation for another day, as there are a lot of opinions about what should go there that reflects the 112 years of state history since the Capitol opened in 1905.

The restoration of the Minnesota Capitol has also restored one of its original purposes: to showcase art