Should Minneapolis live with an acting police chief until next year when a new City Council and perhaps a new mayor take office? Such a path would allow for a broad search for a chief, opening the job to outsiders not ingrained in department history and culture.

Or would the city benefit from a permanent appointee with the authority to continue fulfilling a reform agenda?

Mayor Betsy Hodges has come down strongly on the side of making acting Chief Medaria Arradondo the permanent head of the department and made it formal Tuesday by nominating him at the city’s Executive Committee.

“I certainly saw the measure of his leadership in the last few weeks as we dealt with such a tragic incident in the city of Minneapolis,” Hodges said Tuesday in reference to the police killing of Justine Damond. She refers to the man most call by the nickname “Rondo” as a “Minneapolis kid” who graduated from Roosevelt High School.

At a press conference Monday, Hodges was asked why she doesn’t wait for a new council to propose making Arradondo’s nomination permanent? She said she had “deep and complete confidence” in him. A national search might make sense only if she didn’t have such confidence. But she also said she thinks the city and the department need stability.

Under the city charter, Hodges can only nominate a chief. If the Executive Committee chooses not to forward it to the full council, she must nominate someone else. While the full 13-member council will decide whether to appoint Arradondo, likely at its Aug. 18 meeting, the four council members on the executive committee made it clear they agree with Hodges. A unanimous vote of committee members who cover a wide swath of council and city political beliefs advanced the nomination.

Whether to wait or whether to move ahead now was on their minds.

“I think it’s important to call that out here,” said Council Vice President Elizabeth Glidden. “We have a partial term left — about 17 months — we are in an election year.” Glidden is the only member of the council not running for an additional term, and Hodges is in the midst of a competitive re-election campaign.

“Essentially what that means is if we did decide that doing a search was the right thing to do, potentially that means a significant amount of time to go through that process,” Glidden said. “That is time that I’m very concerned about losing, especially when there is someone like acting Chief Arradondo who is here, who is embedded in the community and who is ready to do the work.”

Glidden said that the practical differences between the two paths would be minor. A national search could take up to a year. At most, an appointed Arradondo would serve just five months longer than that before needing to be renominated or replaced.

“I actually believe we will be doing something of great value for the next council, appointing the chief for the remainder of the term,” said Council Member Cam Gordon, who identifies with the Green Party and is the council’s lone non-DFLer. He said the next council will have a chance to weigh in on police leadership after this chief term ends in January 2019.

While process was discussed Tuesday, so were council opinions of Arradondo’s qualifications. The 28-year department veteran is well known to council members through his leadership roles, including 1st Precinct inspector and most recently as Janeé Harteau’s chief of staff and deputy chief.

In the later role, Arradondo — known as “Rondo” — took a lead in the implementation of the body worn camera project and was the department’s liaison with the federal National Initiative for Building Community Trust and Justice. He was recently thrust into the public realm again after the police killing of Justine Damond, representing the department until Harteau returned from vacation. It was shortly after her return to the city that Hodges asked for and received Harteau’s resignation.

“I have always been impressed by his character, by his openness and by his approach to the work of public safety but centering that within community,” Glidden said.

Gordon said Arradondo jumped in when the council member wanted the city to examine having professionals respond with police officers when subjects of police dispatches could have mental health problems. And Council President Barbara Johnson said she was pleased that Arradondo was willing to take the job. 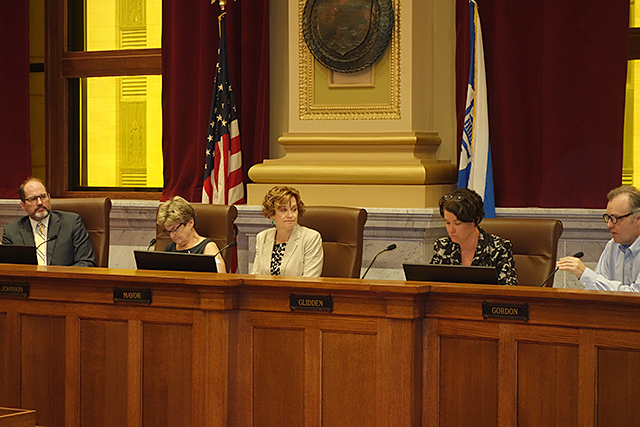 In addition to the four who supported the appointment Tuesday, two other council members stood behind Hodges at a Monday press conference in which she formally announced her decision. They are John Quincy and Lisa Bender. It will take seven votes to appoint him to the job permanently.

At that Monday press conference, Arradondo laid out his vision of the department — one that would build on Harteau’s own reform agenda she dubbed “MPD 2.0.”

“The greatest currency of value that we have with our community is trust,” Arradondo said. “Each and every day our officers must go out there and earn that trust one contact at a time.

“Over the past several years the Minneapolis Police Department as well as police departments all across the country have certainly been scrutinized, there have certainly been areas of our community where the trust has been shaken,” he said. “I am committed to being sure that when history is written, we are on the right side of history.”

The Minneapolis city charter takes an unusual path toward nomination and appointment of department heads, with special consideration for the chief of police. Under the system, mayors make appointments that first must be approved by the executive committee. That committee is chaired by the mayor and includes the council president and three other council members.

Unless all council members are of the same political party — an unofficial designation since they run on a nonpartisan ballot — the minority party must be represented. In the case of the current council, Gordon must be a member. The others are Council President Johnson, Council Vice President Glidden and Council Member Kevin Reich.

If approved by the full council, chiefs serve a three-year term and can be removed from office by the council only for cause. Another twist in the charter is that, unlike that of other department heads, the chief’s term is three years — which means it doesn’t line up with a mayor’s four-year term. Hodges, therefore, inherited Harteau, who was appointed by her predecessor, R.T. Rybak. Hodges reappointed her in the midst of her own first term as mayor. And the next mayor — Hodges or a challenger — will serve a year of a term before having a voice in who runs the police department.