The Metro Transit staff that has been holding the Southwest Light Rail Transit project together through years of problems passed two major milestones this week.

One was the opening of bids for the largest of the project’s construction contracts, which came after bidders requested a delay. The other was the finalization of agreements with two railroads to allow the use of their rail corridors for light rail tracks and stations.

At a special meeting Wednesday, a unanimous Metropolitan Council approved the rail agreements and congratulated the staff for the work. Project staff will now move ahead on getting final approvals from the Federal Transit Administration and make formal application for a 50 percent federal match on the project — an amount that now stands at $928.8 million.

The two moves came as good news for supporters of the $1.858 billion, 14.5 mile extension of the Green Line, which will connect downtown Minneapolis to Eden Prairie. It means that the project is on a path to begin construction in the spring, though additional hurdles still remain.

And yet, what most people want to talk about is a wall. A really big wall.

Just this week, Metro Transit revealed that among the demands made by BNSF — one of the two railroads who control part of the right-of-way along the project’s route — was that a 10-feet high by three-feet wide reinforced concrete wall be built between its freight tracks and the light rail tracks.

Known as a Corridor Protection system, the wall is designed to keep a derailed freight train from colliding with a light rail train, and will run from just south of the Royalston Avenue/Farmers Market Station to the Bryn Mawr Station. That’s 1.4 miles. The early guess at the cost is $20 million, which would have to come out of the project’s contingency fund.

On Monday, Minneapolis Public Works Director Robin Hutcheson wrote a letter to Metro Transit raising concerns with the wall and asking for more information. “During the development of the SWLRT project, city staff has consistently maintained the position that barrier walls would be a detriment to the project and the community,” Hutcheson wrote.

That same day, Minneapolis City Council Transportation Committee Chair Kevin Reich wrote to his counterpart on the Met Council, Katie Rodriguez, raising concerns about the wall as well as other aspects of the railroad agreements. “We were told verbally that this is a ‘crash wall,’” Reich wrote. “We have numerous concerns about this, including: the visual impacts, what this implies about safety, and what precedent this may set for future projects. We are concerned that the public has not been engaged on this issue.”

Then, on Wednesday, two key Democratic lawmakers from Minneapolis wrote the Met Council asking for a delay in approval of the railroad agreements. In a letter to new Met Council Chair Alene Tchourumoff, Sen. Scott Dibble and Rep. Frank Hornstein questioned the timing and transparency of the agreements. “We understand the Met Council intends to provide final approval today at a special meeting,” the pair wrote. “This timeline allows no meaningful transparency or public input and is therefore unacceptable.”

All those concerns didn’t slow down approvals of the agreements. The negotiations with BNSF and the Twin Cities & Western Railroad were completed Friday evening and the results were presented Monday to the council’s transportation committee. Public notice of Wednesday’s special meeting didn’t go out until Monday morning.

When Council Member Gary Cunningham asked staff why there was such a rush, Jim Alexander, the SWLRT project manager, said speed was necessary because the project office wants to apply for an important permit from the FTA — known as a Letter of No Prejudice — on Monday. That document is the federal government’s OK to start spending local dollars on construction costs with the assurance that they will be eligible for matching dollars later. 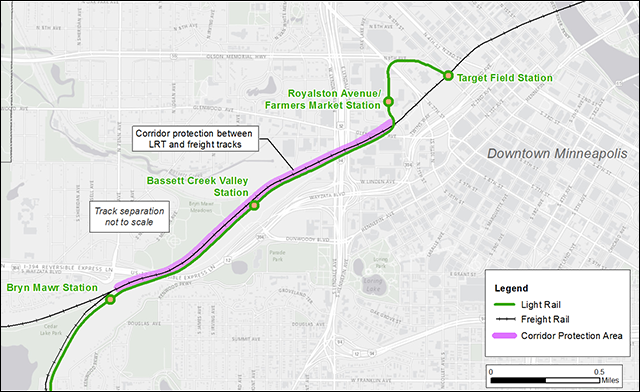 Metropolitan Council
A map of the barrier protection wall location

With the railroad agreements in hand and the first construction bid nearing acceptance, the project could then make its final application for federal cost sharing — the Full-Funding Grant Agreement — in September.

“I have heard some feedback on the process that this feels like it’s happening quickly,” Tchourumoff said. “And I recognize that it’s been a really difficult balance between meeting some of the timeframes that we have for the project while at the same time providing important information to our council members and key stakeholders.

“When we’re in difficult negotiations like this, the process is not always ideal,” she said.

There are other  pieces of the agreement that will be controversial, however. Met Council has accepted much of the liability for accidents in the corridor and agreed to discontinue light rail service should local legislation be passed that prevents full use of the corridor for freight, including ordinances to block oil trains.

Alexander said that is only a remote possibility because the federal government keeps tight control of freight regulations, and he pledged to work closely with the City of Minneapolis and residents in the design of the wall and other elements included in the agreements. “I have reached out personally to the director of Public Works Robin Hutcheson and we are putting together a work plan where we will address the concerns that are raised with this wall,” Alexander said. 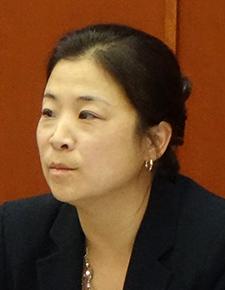 He also said staff would seek public input on what the wall might look like. But he said staff doesn’t think it is enough of a change to reopen environmental review of the project.

Still, one council member wondered how much could be done to make the wall less obtrusive. “It’s a big wall and I don’t think we can fool people,” said Gail Dorfman from St. Louis Park. “We need to work with the neighborhood and make it the best we can. But we’re not going to hide it. We’re going to see it.”

Cunningham said he would vote for the agreements but said the process “created some ripples that were unnecessary, especially with some of our legislators and councils of the cities I represent.”

While the wall is getting much of the attention, the week’s other milestone is also significant. On Tuesday, after several delays requested by prospective bidders, Metro Transit staff opened the bids for the largest contract in the project: the civil construction contract that covers the bulk of the rail, stations, bridges, tunnels and other infrastructure.

The apparent low bid was from a consortium, Ames Kraemer SWLRT Joint Venture, for $796,517,023. The next closest bid came from Lunda/C.S. McCrossan for $807,888,309.39.  The council staff said it was prohibited by state law from commenting on the bids or even saying whether they were within the budget.

By comparison, the two civil construction contracts for the Central Corridor — there was one for the St. Paul segment and one for the Minneapolis segment — totaled $314 million. That amounted to about one-third of that project’s $957 million budget. The low bid for SWLRT would amount to almost 43 percent of that budget.

Staff must now review the bids, work that should be completed by November. 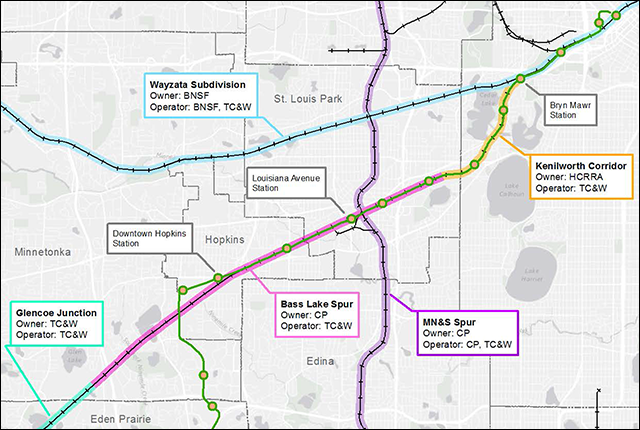 The Met Council expects to grant two additional contracts later in 2017, one for construction of a maintenance and operations facility in Hopkins and another for the electrical power, signaling and communications system. It has already has a contract for the 27 light rail vehicles needed for the line. That went to sole bidder Siemens for $118 million.

Where are the feds?

There was both a wringing of hands and cheers of delight when the Trump Administration presented a budget plan that zeroed out new funding for light rail projects in 2018. But it appears the Republican-controlled Congress is about as receptive to such a plan this year as it was last.

The difference will be sorted out in conference committee but it is unlikely that the result of that process will be zero. Last September, when Congress reached a deal on the 2017 budget, it rejected Trump’s call for zero money for rail projects that didn’t yet have full-funding grant agreements with the Federal Transportation Administration. That budget, which Trump signed, included all of the expected funding for rail projects, including an initial $10 million for SWLRT. 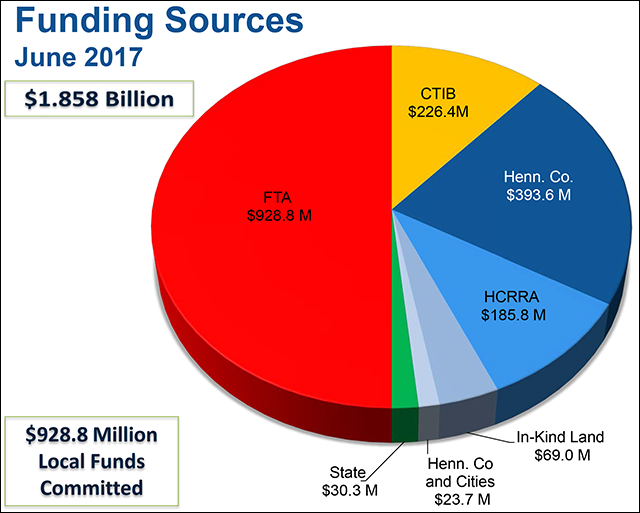 The current budget bills do not list specific projects; that will likely come from the FTA in early 2018. But both budgets direct the FTA to proceed as it has in previous years to advance projects as they meet requirements. Fears earlier this year that the FTA under Trump would simply refuse to sign funding agreements were allayed when the department moved ahead with funding for a electrification project for California’s regional Caltrain system.

Finally, U.S. District Court Judge John Tunheim has set a hearing for Oct. 4 to hear arguments on a request by the Lakes and Parks Alliance for a summary judgement on its claim that the project violated federal environmental laws. Tunheim turned them down two years ago, but said they could return if the found additional evidence that the project made a routing decision before its environmental review was complete.

Emails obtained by the plaintiffs seem to show some conversations among the political leaders to that effect, but Met Council attorneys say the new evidence is not enough for Tunheim to change his mind.