Despite having perfectly good and oft-used chambers down the street, the Minnesota Supreme Court opted to hold Monday’s hearing of oral arguments in the case pitting Gov. Mark Dayton against the Legislature in its historic chambers in the Minnesota Capitol. The freshly restored digs are just down the hall from the House and Senate chambers, and one floor above the governor’s office.

It was an appropriate venue for the issue at hand: how to continue the state’s history of balancing those three co-equal and distinct branches government — the governor, the Legislature and the courts — in the wake of a move by Dayton to defund the House and Senate.

In May, after a messy session and special session concluded, Dayton surprised everyone when he signed a series of budget bills and a $650 million tax cut bill — but then used his line-item veto power to eliminate the entire budget for the Legislature’s operations. He said he did it to compel lawmakers back to the negotiation table to discuss some specific budget and tax cut provisions he didn’t like. Legislators responded by declaring the move unconstitutional and suing Dayton. A district court agreed with their assessment, ruling the governor’s veto “null and void.”

Dayton appealed all the way to the Supreme Court, and Monday’s hearing was full of heavy questions about the separation of powers provisions of the state constitution. Can one branch of government actually defund another branch? Do the courts have any power to allocate money to the other branches of government, even in an emergency? And just how far does the gubernatorial veto power go?

As Dayton said outside of the court chambers after the hearing concluded: “The core question here, which the court I hope will answer is: Is my veto constitutional? I believe it clearly is.”

No governor has ever vetoed funding for the House and Senate, and the court’s ruling could have long-lasting implications for all three branches.

“This is historic,” Republican Senate Majority Leader Paul Gazelka said after the hearing. “If the courts did rule in the governor’s favor, that could potentially ripple across the whole country, moving more power to the governor’s branch and the executive branch. I wanted to witness this.”

The case has already stretched on for months and cost tens of thousands of dollars. In June, Ramsey County District Judge John Guthmann approved temporary funding for the Minnesota Legislature as the court case played out, and the following month he struck down Dayton’s veto entirely.

The Supreme Court is the final stop, and the justices wasted little time at Monday’s hearing. “Counsel, can we just get to it?” Chief Justice Lorie Skjerven Gildea said in the first two minutes of the hearing, interrupting Dayton’s attorney, Sam Hanson, a former Supreme Court Justice himself, as he was making the governor’s legal case.

The question cut right to the complicated issue at the heart of the case. The governor argues the state Constitution gives him explicit authority to line-item veto any individual budget item from a larger bill or any bill in its entirety. But while Dayton has the power to veto or sign budget bills, according to the Constitution, only the Legislature has the power to craft budget bills and appropriate money.

When those two sides can’t agree on what to fund, Hanson argued, the courts can come in and provide temporary funding to the Legislature or executive branch for core functions while political disputes are resolved. 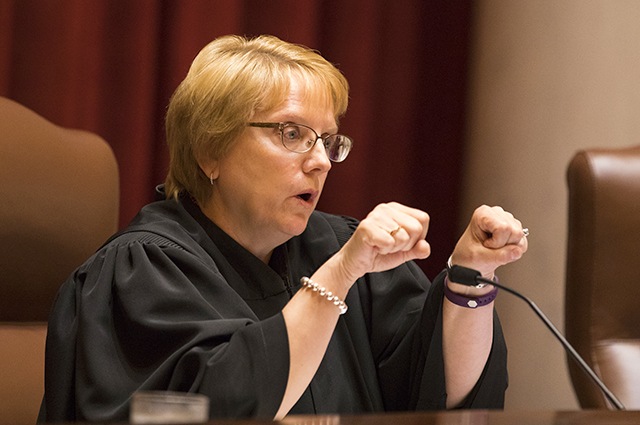 But that argument didn’t sit well with Gildea, who fired back: “The Constitution already tells us who has the power to appropriate money, and it’s not the judiciary.”

Supreme Court justices said they felt uncomfortable with the notion that the courts can come in and appropriate money whenever there’s political gridlock, which has happened several times over the last two decades.

“We have put in place a mechanism that allows on some regular basis potential parties and the branches to come back to the judiciary to solve these problems,” Justice Natalie Hudson said. “That concerns me.”

Did the Legislature ‘coerce’ the executive branch?

But the attorney for legislative leaders also faced tough questions — also about the separation of powers, including whether the Legislature attempted to overstep its constitutional authority and force the hand of the governor to sign the tax bill.

Specifically, justices pointed out that part of the reason the governor ultimately signed the tax bill instead of vetoing it is because a provision in a bill funding state government would have eliminated money for the entire Department of Revenue if he didn’t.

While the Legislature argues Dayton is trying to “coerce” them back to the budget debate by vetoing their funding, weren’t they doing something similar when they inserted a poison pill into the process, forcing the governor to sign the tax bill? asked Justice G. Barry Anderson.

Doug Kelley, the attorney hired by Republican legislative leaders, said that “sharp elbows” are common in politics these days, but that what lawmakers did was not unconstitutional since the Department of Revenue isn’t an entire other branch of government. 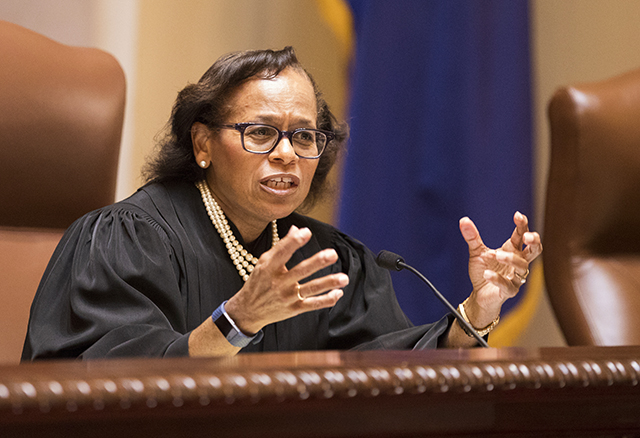 Pool/Leila Navidi/Star Tribune
Justice Natalie Hudson: “We have put in place a mechanism that allows on some regular basis potential parties and the branches to come back to the judiciary to solve these problems.”

Kelley also said the governor “rendered one branch inoperative and unable to defend itself” by vetoing its budget after the Legislature adjourned a special session, which meant legislators didn’t have the opportunity to come back in and try to override his veto, which is also prescribed in the Constitution. Only governors have the power to call lawmakers back into session after they’ve gone home.

But justices noted that only the Legislature can adjourn a session or special session, which it did promptly after passing all the budget bills.

“They could have either overridden that veto, assuming they had the votes to do so, or sent him a new bill [if they hadn’t adjourned],” Hudson said. “They negotiated away, in essence, their right to exercise the mechanism the Constitution gives them.”

Kelley responded that adjourning after they finished the budget work was just honoring the agreement legislative leaders made in negotiations with the governor. To which Justice David Lillehaug asked: “Is there anything in the agreement where the governor committed not to veto anything?”

A ruling ‘in due course’

Adding intensity to the whole situation was the fact that the hearing was streamed live, the first time in state history the court’s oral arguments were broadcast. The Supreme Court justices were punchy, often speaking over one another and attorneys to ask questions in the 90-minute hearing. The justices have taken the case under advisement and will issue a ruling “in due course.”

Technically, the July ruling from Ramsey County District Court restored the full $130 million of funding to the Legislature vetoed by Dayton. If the Supreme Court overturns that ruling, the Legislature is still funded until Oct. 1 under a separate ruling in district court. After that, the Legislature would have to dip into several million dollars in reserve funds, which could keep them operating for several months. The next legislative session doesn’t start until Feb. 20, 2018. Their other option is to go back into budget negotiations with Dayton, as he’s requested, but they’ve pushed back hard on that idea. 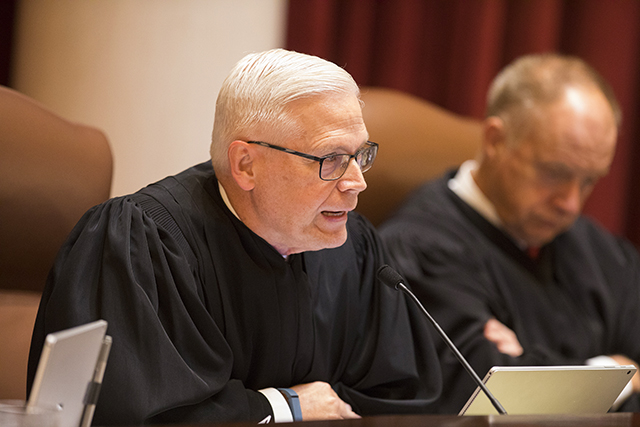 Pool/Leila Navidi/Star Tribune
Justice David Lillehaug: “Is there anything in the agreement where the governor committed not to veto anything?”

Whatever happens, the whole ordeal put on display — again — the messy state of Minnesota politics. The case represents the fourth time budget disputes have gone before the courts since 2001. And now Dayton, who is heading into his last year in office, is facing another session negotiating with a Republican-controlled Legislature, with the case putting even more strain on an already-bumpy relationship.

“Someone once said, ‘Democracy is the worst form of government except for every other one that’s been tried,’ ” Hanson, Dayton’s attorney, said in his final rebuttal before the court. “This is a beautiful process. It works, it works especially in Minnesota, it’s worked for hundreds of years and it’s working now, even though there are bitter disputes.”