As far as fancy homes on Summit Avenue go, the residence at 1006 doesn’t exactly stand out.

Built by a lumber baron in 1912, the brick and stone home was designed as an interpretation of an English Tudor country manor, a style that fit perfectly on St. Paul’s most fashionable street. But it has a distinction that sets it apart from the rest of the historic mansions on Summit Avenue: It’s the governor’s house.

Since it was donated to the state in 1965, the 14,000-square-foot home has hosted thousands of Minnesotans, global dignitaries and Hollywood celebrities like Robin Wright and Jack Nicholson. It’s also been in the news over the years, especially recently. It was the site of days of protest after the police-involved shooting of Philando Castile, and it was where the governor and top legislative leaders held budget negotiations while the Capitol underwent massive restorations over the last three years.

Last year, as crews finished the Capitol, the number of events for the public in the home went from several hundred a year to several thousand.

Besides serving as an event space and political gathering place, however, it’s also been a functional home for 10 different governors and their families, including the more than 20 children who have lived there over the years. And while some states have turned their governor homes into museums — or even tore them down — Minnesota has preserved the residence through a governance structure that includes state commissioners and hundreds of dedicated volunteers.

“The building being 100 years old, we want this to be here in 100 more years,” said Kathy Buggy, a longtime volunteer with the governor’s residence. “So it’s working with the state to make sure it’s structurally sound, and what can we do on the inside to enhance the environment so that the governor can use it and the state can use it.”

The house was originally built for Horace Hills Irvine, a St. Paul lumberman and lawyer, for a grand total of $57,000, including the acre of land it sits on. Irvine was a staunch Republican, but his wife, Olivia Irvine Dodge, was a Democrat. From day one, according to historical accounts, the home was the stage to heated political debates during which neither spouse would give an inch.

Over the years, the Irvines hosted plenty of parties and raised their children in the home. And in 1965, their two youngest daughters, Clotilde Irvine Moles and Olivia Irvine Dodge, donated the residence to the state of Minnesota, in memory of their parents. At the time, governors lived in their own private homes and hosted official functions in the reception room in the Minnesota Capitol. But the daughters wanted to give the governor a place where he or she could host parties and maintain the political tradition of the home. 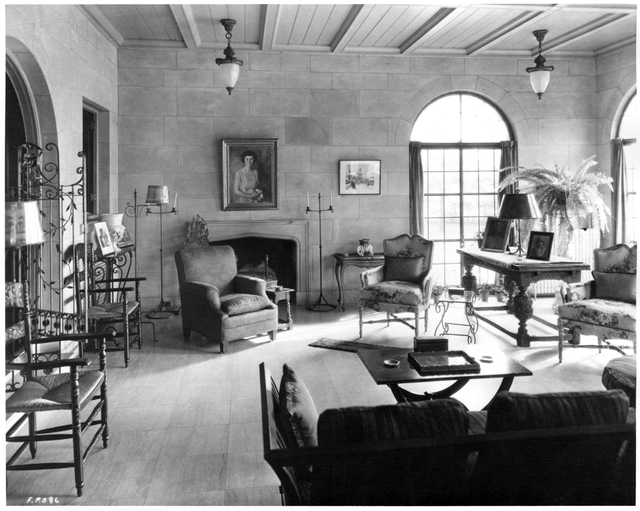 A month after the house was donated to the state, it got its first big test. Crown Prince Harald of Norway was scheduled to pay an official visit, but Gov. Karl Rolvaag and his wife, Florence, had just moved in, and there was no furniture. Rolvaag said he would “beg, borrow or steal” enough furniture to make the house look presentable, and Minnesota residents stepped in to help. They loaned enough pieces by the time the prince arrived.

After the visit, work began to update the residence as a home for all future governors. After four months, a new kitchen, new carpeting, lighting fixtures, bath fixtures, and tiles were installed. A team of professionals was hired to manage the residence, as well as cook and clean for the governor and keep up the grounds. 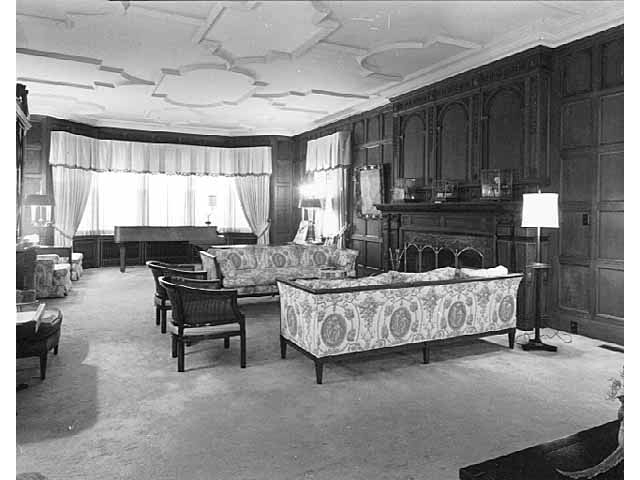 The residence hosted its first public open house on July 4, 1973, which drew about 11,000 people from across the state. Then, in the early 1980s, the state created the Governor’s Residence Council to advise state officials on preserving and maintaining the house. It has 19 members, including the commissioner of administration, oftentimes the governor’s spouse, the director of the Minnesota Historical Society, and one member each from the Minnesota House and Senate.

“I think it’s important to the state and the people of the state in many of the same ways that the Capitol is,” said Matt Massman, commissioner of the Department of Administration. “People, regardless of where they come from in the state, have an expectation that they are able to participate in their state government. These things are buildings but they are also symbols of the democratic institutions of the state and all that entails.”

As new governors were elected, and new families moved in the residence, it became difficult for the state to keep up with preserving the the home while also adapting it to the needs of modern life. That quickly became apparent to Gretchen Quie, wife of Republican Gov. Al Quie, when the couple moved into the home in 1979. The Quies used the residence more than first families before them, retrofitting the carriage house to host a refugee family from Vietnam and opening the residence to bring the public in on a more regular basis. Gretchen even hosted a popular radio contest on WCCO called “Night at the Mansion,” where names would be drawn to win dinner with the governor and the first lady and then stay overnight at the residence.

There wasn’t any official organization helping to organize events at the residence, and she was worried that while the state council was taking care of the shell of the home, no one was paying for updates needed for the interior, where public events were held. So in the early 1980s, Quie and a group of her friends, including Sue Zelickson, the longtime food writer and philanthropist, and Shirley Dayton, aunt of current Gov. Mark Dayton, created the 1006 Summit Avenue Society, a nonprofit volunteer organization that would raise money to do work inside the residence. 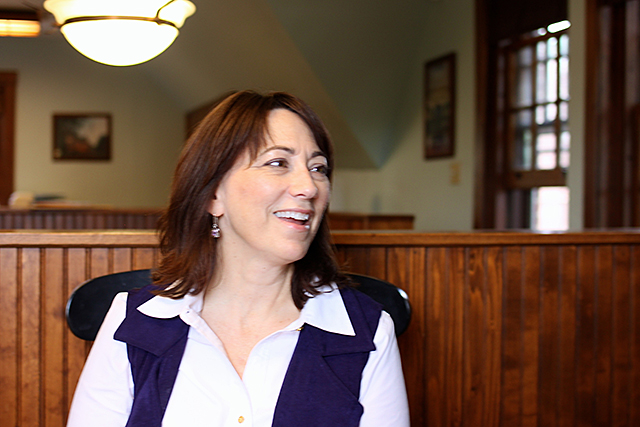 MinnPost photo by Briana Bierschbach
Kathy Buggy: “The building being 100 years old, we want this to be here in 100 more years.”

“She was doing a lot of entertaining at that time,” said Sean Ryan, current president of the 1006 Summit Avenue Society. “She really realized there was a gap in what the state could provide and what they needed to actually function as a public building.”

Quie and her friends raised the first batch of money for the 1006 Summit Avenue Society by selling her own cookbooks out of the trunk of her car. Today, the society has raised more than $500,000 for household items ranging from china and silver to conference room furnishings.

“The 1006 has touched pretty much every corner of the main level and the lower level. Wherever the public goes, we go,” said Buggy, a former president of the 1006 Summit Avenue Society. “We come up with the soft furnishes, the drapes, the pillows, pretty much everything you see.”

It’s become an important function in a state where political control of the Legislature and governorship often flips back and forth, when purchasing anything from new drapes to salad forks for a governor could easily become a political football.

That’s what happened to former DFL Gov. Rudy Perpich, who became incensed when a newspaper published what it thought was an inventory of the governor’s residence, including more than 100 chairs, six television sets and 26 sofas. Perpich responded by encouraging the 1990 Legislature to sell the governor’s residence and all its contents to help the homeless. 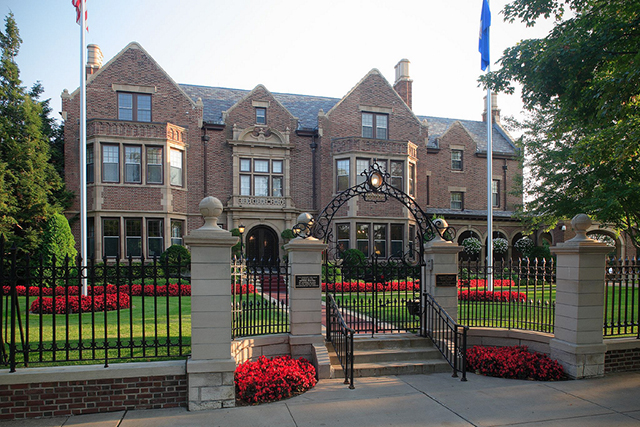 That never happened, of course, but the group’s fundraising has given cover to projects that might have caused political controversy in other states. “In Minnesota, politically, it becomes difficult to buy a rug for a first residence. It’s about how it can be perceived,” Ryan said. “We take some of that out of the political arena.”

These days, state officials don’t even like it when people refer to the home as a “mansion,” worried that the word conjures some sense of haughty remove.

Each administration that comes in needs a new setup for their needs, and the society works with governors to adapt the home. Gov. Wendell Anderson, for example, installed plexiglass between the banisters of the historic stairs to protect his young children from falling into the foyers, and current Gov. Mark Dayton has done something similar for his two German Shepherds, Mingo and Itasca. Gov. Arne Carlson liked to host press conferences in the library, while other governors used it for a family room or an office. Former Gov. Jesse Ventura added a pool table to the basement of the residence, a gift after he beat Tipper Gore in a game of pool.

Then there’s the (possibly apocryphal) story that one unnamed governor needed a temporary nursery — for raising baby goats. 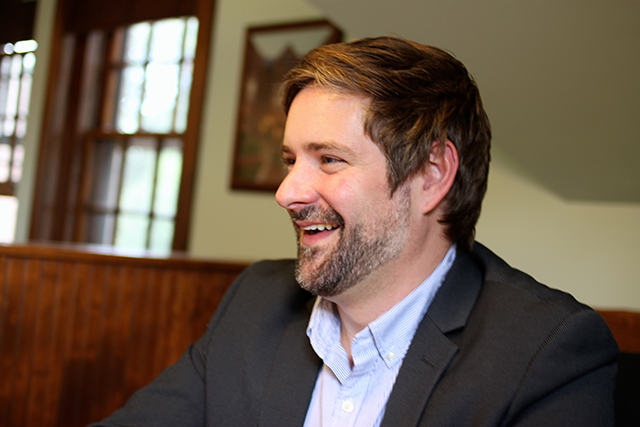 MinnPost photo by Briana Bierschbach
Sean Ryan: “In Minnesota, politically, it becomes difficult to buy a rug for a first residence. It’s about how it can be perceived. We take some of that out of the political arena.”

To survive over the last three decades, the society raised money by encouraging members to join; it’s now made up of 200 members from around the state, and a board of between 12 and 16 people. Members have written history books, cookbooks and children’s books about the home to sell. They also do an annual Minnesota-themed fundraiser to raise a bulk of their budget. It takes place on Sept. 29 this year, and the theme is “Experience Minnesota,” which will include foods from every region in the state.

The all-volunteer organization is a mix of history buffs, former state employees, architects and people who like to be civically involved, and has managed to hang on for more than 30 years by doing what Quie did back in the 1980s — recruit friends.

“I’m a history buff, so that’s how I first got interested,” said Ryan, the first male president of the 1006 Summit Avenue Society. “But since its inception, it’s really been a group where you bring your friends in, and they bring their friends in, just like Gretchen did.” 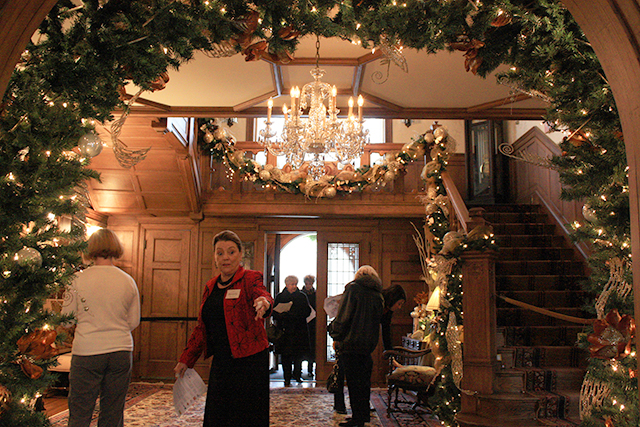 Office of the Governor
An archway near the entrance of the residence decorated for the holidays.