In June, hundreds of people packed the Minneapolis City Hall chambers and hallway for the chance to speak at a hearing about raising the city’s minimum wage from the state-mandated $9.50 to $15 an hour.

Mary Turner was one of the people signed up to speak, but with testimony scheduled to stretch from midafternoon late into the evening, she knew she needed to make her two minutes count. So Turner, a registered ICU nurse at North Memorial Medical Center in Robbinsdale, decided to focus her comments on the health-care side of the debate.

“Night after night we see people coming into the emergency room because they have inadequate housing, inadequate food,” she said in her remarks advocating for raising the wage. “This is a public health crisis.”

Turner was at the hearing as more than your average nurse. She came as the president of the Minnesota Nurses Association, the union that represents 22,000 registered nurses across the state.

For decades, the union has weighed in on issues that directly affected those members: staffing, safety, flexibility in the workplace. Until recently, though, it wasn’t necessarily common to see nurses advocating for issues that weren’t directly tied to health care.

That’s changed. Under new leadership, the nurses — often in their signature red T-shirts — have become a highly visible force in the Capitol’s corridors and city halls throughout Minnesota, arguing that good jobs, wages and a quality of life play an important role in public health. They’ve advocated for things like a higher minimum wage in Minneapolis and St. Paul, changes to immigration policy and paid sick leave, and pushed back on efforts to pass legislation to pre-empt local governments from passing their own ordinances.

They are also hoping to play a big role in elections. They’ve endorsed a diverse slate of municipal candidates in Duluth, St. Paul and Minneapolis this fall, and expect to be a player in the wide-open 2018 governor’s race, for which they’ve already stepped in to back their preferred candidate.

“They have continued to expand that part of their work reaching outside of that wall of direct provision of care to things that are the foundation of health, whether it’s access to a good job, tax policy, racial disparities, climate change and how these things impact public health,” said Erin Murphy, who served as executive director of the MNA before becoming a state representative and who’s now running for governor. “And they have moved along significantly in flexing their muscle in elections.”

As Turner likes to point out, organizing among Minnesota nurses is nothing new. In the early 1900s, nurses worked under poor and dangerous conditions, and without standardized schooling and a code of ethics, people were practicing nursing who didn’t have proper training to treat patients. So in 1905, more than 100 nurses from Minneapolis and St. Paul met and crafted the first-ever statewide nurses registry, a code of ethics and organized under the banner of the Minnesota State Graduate Nurses’ Association.

When nursing schools started popping up, the group secured the first law for the registration and licensing of nurses. As the decades went by, the group grew and reorganized as the MNA, which often focused on addressing persistent issues over working conditions and job security.

In the early ’80s, nurses said they were being forced into layoffs and part-time work without adequate protection from hospitals. So at 6:30 a.m. on June 1, 1984, 6,000 nurses at 15 Twin Cities-area hospitals walked off the job. The largest strike of its kind in the nation at the time, the walkout affected about half the hospital beds in the metro, and the dispute stretched on for 38 days. Finally, after an 18-hour negotiating session, an agreement was ratified between the nurses and the hospitals. A new contract would take seniority into account with layoffs and result in higher salaries for the nurses.

The breadth of that strike was surpassed in 2010, when 12,000 Twin Cities nurses walked off the job at Twin Cities hospitals for one day to protest the lack of strict nurse-to-patient ratios, an idea that was rejected by hospitals as inflexible and unnecessary.

‘We can’t sit on the sidelines’

It was around this time — during the 2010 contract negotiations with Twin Cities hospitals — when Turner first got involved in the political side of the union.

Raised in a Republican family in New Hope, Turner hadn’t initially been a particularly active member of the MNA; she felt that her views wouldn’t necessarily be represented in the Democratic-leaning union. (There are about 101,000 people in the state with a nursing license, but not all are practicing or work directly with patients.)

But Turner had been drifting from the GOP for a few years, and she was concerned with what she saw as the widespread “corporatization” of health care across the state. Smaller hospitals were being bought up by big hospital companies, and staffs were being cut back. During the nurses’ 2010 contract negotiations with hospitals, the union managed to fend off cuts to nurse pensions, but hospitals won on salary increases, and the issue of staff-to-patient ratio was left unaddressed.

“That consolidation thing is going on big time and the feeling is that as nurses we are on some kind of assembly line with our patients,” Turner said. “That factory model is not conducive with bedside nursing. When you get people that are trying to run a health-care company and they have their MBA but they have no concept about the human side of it? It just doesn’t jive.” 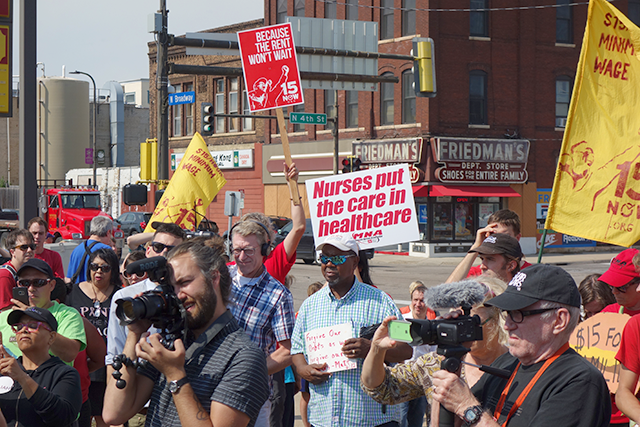 MinnPost photo by Peter Callaghan
MNA members joined activists at a Minneapolis fast food restaurant on Sept. 12, 2016, prior to a march for a higher minimum wage ordinance.

After the negotiations, Turned dove into the organization, especially the political side of the union, first by running and winning a spot on the MNA’s board of directors. She then moved on to the government relations team, which is how she first got involved in issues at the Capitol.

Turner, who still works late-night shifts at North Memorial Hospital’s level one trauma unit, saw a need for nurses to get involved in issues that went beyond the bedside — to address the reasons patients had to go to the hospital in the first place: from access to health care and earning sufficient wages to immigration status.

So when she was elected president of the MNA in 2015, she decided to make a shift in the group’s priorities.

“I was born and raised Republican, but now I’m a union leader,” Turner said. “As far health care is concerned, none of that matters. I realized we can’t sit on the sidelines.”

Wanting a say in elections

Nurses aren’t strangers to political battles, of course. The MNA was one of the first provider organizations to push for MinnesotaCare in the early 2000s, a state health-care program that covers low-income Minnesotans, mostly in rural parts of the state. And in 2015, MNA members filled the Capitol to push for a bill to establish a safe patient standard, which aimed to set minimum staffing requirements for nurses, regardless of the size of the facility.

Staffing levels and workplace safety are still some of the top priorities for the organization, but under Turner’s leadership, the MNA has been particularly active at the Capitol on a broad range of issues. Last session, it pushed back on efforts from the Republican-controlled Legislature to pass a pre-emption bill, which would have blocked local governments from passing their own paid leave and minimum wage laws.

The group has also been active at the city level, in part, Turner said, because there was so much gridlock in state and federal politics.

Still, the decision to step out on issues like a $15 minimum wage and earned sick and safe time hasn’t been without pushback from some members. “Some do say, ‘Oh all these social justice issues, you’ve got to stick to just the bedside, ‘” Turner said. “The first thing I point out is that in our 112-year history, who do you think was out on the streets for women’s right to vote, child labor laws. Who were the women? It was the nurses and the teachers. We were right there at the beginning in terms of social justice issues.”

That approach has also made the union members players in elections across the state. In Minneapolis alone, the MNA has endorsed a politically diverse slate of candidates for City Council, from a Socialist Alternative, Ginger Jentzen, in Ward 3 to the sitting council president, Barbara Johnson, in Ward 4. They’ve also endorsed Dai Thao for mayor in St. Paul and Raymond Dehn for mayor in Minneapolis.

They’ve also waded in early in the 2018 Minnesota governor’s race, throwing their support behind DFLer Murphy, who is running against five other Democrats for the party’s backing. By all accounts, their screening process was intense, set up like a speed dating round with four different panels of nurses, where all six DFL candidates (Republican and Independence Party candidates were invited too) for governor had to answer the same set of questions.

“Some of them hated it,” laughed Shannon Cunningham, director of governmental and community relations for the MNA. “I know they did because they told me they did.”

For the union, one of the single biggest issues in city and state races is single-payer health care, something that — though it’s become a hot topic since the last election — has always been one of the organization’s top priorities. “That was one of the nurses’ core beliefs, that people have a right to health care,” Murphy said. “That is rooted in justice and a philosophy that health care is not just a business but also something people need when they are sick.”

In the governor’s race, where health care could be a huge issue, the nurses are hoping to play a big role in driving the debate. For the last three election cycles, MNA has raised and spent more than $450,000 to support its endorsed candidates, mostly collected through union dues. This cycle, the group wants to more actively raise money from members specifically for their political activities, Cunningham said.

“We always have pushed it as an issue, but two or three ago you wouldn’t have found [candidates] standing on a pedestal talking about how we need single-payer medicine,” Cunningham said. “The litmus test from our board was there was no way we can endorse a candidate in this election for governor who doesn’t support single-payer, and we are going to keep talking about that as a top issue.”