Minneapolis City Council Member Cam Gordon didn’t seem to have a problem with the results of an audit showing that many Minneapolis Police Department officers weren’t following the department’s policy in using their body-worn cameras.

He did, however, have concerns about how and when that audit was released. And those concerns have triggered a skirmish over whether campaign politics played a role in how the audit was presented to the public.

The audit, which was ordered by the city council and mayor following the July 15 shooting death of Justine Damond in Southwest Minneapolis, found that many police officers did not abide by department protocols when it came to when the cameras were supposed to be activated. As a result, many MPD engagements with members of the public — including many involving use of force — were not recorded, and many of the interactions that were recorded were inaccurately categorized, making searches for video of critical incidents more difficult.

The audit’s results already had implications for the mayor’s race, raising questions about whether, and how quickly, the culture of the department is changing under reform efforts led by current Mayor Betsy Hodges. But Gordon’s suggestion that campaign considerations may have led to a different-than-normal release of the audit have made the politics even more complex.

Over the last week, Gordon has written that the audit release “could have been influenced by the upcoming election,” while Hodges said the release of what she termed the “improperly conducted and incomplete” audit undermines new Police Chief Medaria Arradondo. Meanwhile, the chair of the city’s Internal Audit Committee, Council Member Linea Palmisano, defended the process, and said that Hodges is the one who politicized the audit.

All this over an issue — how and when police should use their body cameras — that usually produces political agreement. As Arradondo said shortly after the shooting: “What good is a camera if it is not being used when it may be needed the most?”

Report ‘has the appearance of being rushed’

Gordon’s primary complaint, first expressed during a Sept. 27 council committee meeting and then in a Facebook post — was that the release of the audit was rushed and did not follow the procedures laid out in city policy. Audit findings normally are shared with the city entity being audited, in this case the police department, before being released to the public. The idea is to provide whoever is being audited time to insert written comments into the final report.

The MPD, however, saw the results only the day before it was released by Palmisano’s Audit Committee on Sept. 19. And the released version did not contain the normal finding-by-finding response from the department.

“I am concerned that the audit was rushed and that we were left with an incomplete report,” Gordon wrote in a posting that he said contained “disturbing news.” “This has the appearance of being rushed to get to the Audit Committee on September 19, rather than first being presented to the Public Safety committee (again, where the council directed in it to go).” 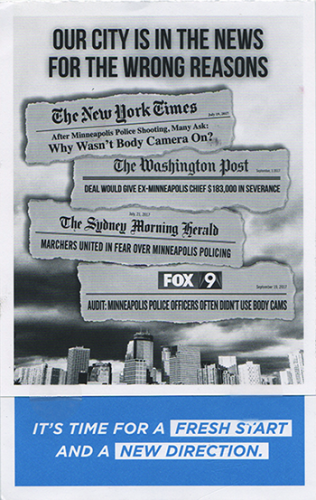 Gordon pointed out that the Sept. 19 meeting “was the last Audit Committee meeting before Election Day, November 7,” and noted, “that this particular report and issue is being used as a major point of emphasis by at least one mayoral campaign. A headline about it even appeared on a piece of campaign literature that was recently mailed to my house, arriving coincidentally the same day the matter came before” the council’s public safety committee.

In response to a Facebook commenter, Gordon said he was referring to a mailing by Council Member and mayoral candidate Jacob Frey, materials that included the headline “Audit: Minneapolis Police Officers Often Didn’t Use Body Cams,” under a banner: “Our City Is In The News For The Wrong Reasons.” Frey also held a press conference immediately after the audit was presented to the audit committee in which he criticized Hodges directly.

At last week’s public safety committee meeting, internal audit manager Kiril Vassiliev said the audit didn’t follow normal timelines because the council asked for a quick turnaround after the Damond shooting. “As far as I know, it was the circumstances around the shooting in the Fifth Precinct that brought to great attention the non-usage of body cameras in that particular incident,” Vassiliev said. “But I don’t know how much of this information was surprising or new. It wasn’t surprising that not all officers were using body worn camera.”

Vassiliev also said the audit was based on the audit team’s observations of the data and those observations wouldn’t have changed with the police department’s response. That response is currently being sought, as is a plan to implement the recommended changes in policy and supervision.

Vassiliev also noted that even if the audit release been delayed to include a written response from the MPD, it would only have added two weeks to the timeline. That too would have been before the election, but would have required a rescheduling of the quarterly Audit Committee meeting.

‘It started with the mayor’

Palmisano, who chairs the Audit Committee and represents the council ward where Damond was killed by MPD Officer Mohamed Noor, has pushed back hard against suggestions by Gordon and Hodges that the audit or its release was politically motivated.

She pointed out that Gordon twice voted in late July for a schedule that directed the audit to be presented to the Public Safety Committee on Sept. 27. And while the staff direction adopted by the council did not reference the audit committee, the discussion at the July meeting made clear that it would first be presented the Audit Committee Sept. 19.  In other words, the council not only knew of the rapid timetable but demanded it, Palmisano said.

Hodges signed the direction to the audit team that contained the deadlines, and at a meeting in July, Public Safety Committee Chair Blong Yang said that he appreciated “the Audit Department and all the other departments agreeing to a timeline that’s pretty quick. It’s about two months from now, so, I’m looking forward to that.” 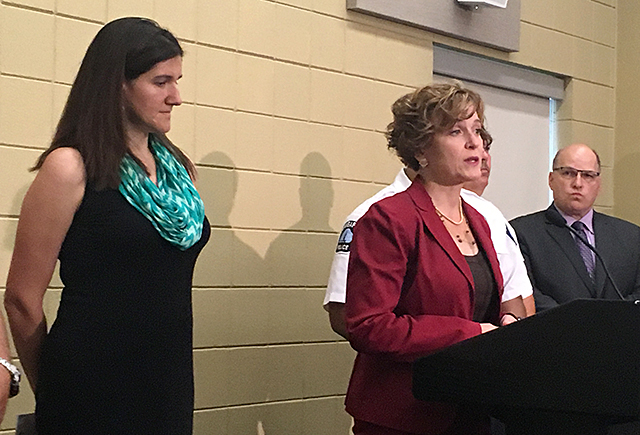 “Nothing about this audit followed the normal process,” Palmisano said this week. But what had long been scheduled as a state-required look at the implementation of the program became something much more complex after the Damond shooting: “It was expedited and enlarged in response to a major public safety concern, i.e. the officer that shot Justine didn’t have his body camera on and neither did his partner,” she said.  “It wasn’t political things. It was an awful officer-involved shooting.”

Instead, Palmisano laid the blame for politicizing the audit on Hodges. While the audit staff was prepared to brief the police department on the results a week before its Sept. 19 release, the meeting was delayed by the department until Sept. 18, Palmisano said. Arradondo did not attend, sending a deputy instead. Only during that briefing did Palmisano learn that Arradondo was holding a press conference at the same time to try to get ahead of the audit release.

“I think this is political at its highest level,” Palmisano said. “But it started with the mayor — perhaps the mayor — creating this day-before announcement of ‘look how many more hours of footage we have and look at how many more videos we have.’”

But Arradondo had only limited information about what the audit would report at that press conference, since final audits are not posted publicly until after the Audit Committee votes to accept them. The numbers released by Arradondo were cherry-picked, Palmisano said, intended to make the results less damaging.

“It’s amazing to me that the complaint here seems to be that we didn’t give the police department enough time to get their story straight, to come up with their alibi before their audit was released. Are you kidding me?” Palmisano said. “I think it is a way to undermine the audit itself and distract from the damning findings of the audit.”

She defended internal auditors Vassiliev and Will Tetsell, calling the result “excellent audit practice” that has created ways for other auditors in other cities to assess body cameras. When the audit was ordered in July, Lead Auditor Tetsell said that the timeline would be squeezed due to a change in camera policy ordered by Arradondo soon after the Damond shooting. (The department now requires officers to turn on their cameras whenever they are dispatched or when they initiate engagements on their own.) The audit team wanted to capture some data on camera use after the change, and the council set aside $29,000 to hire contractors to help with the review of video and logs. 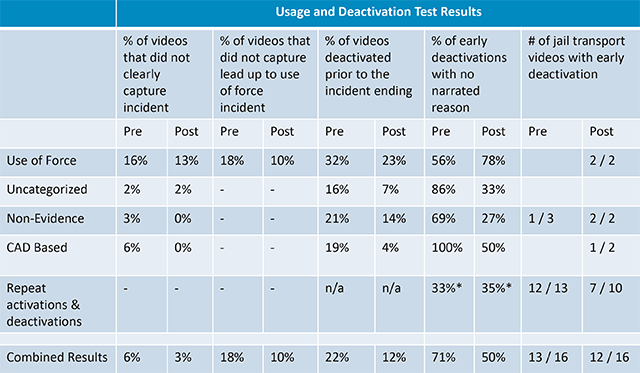 Palmisano acknowledged that Frey’s decision to have his own press conference immediately after the audit was released “wasn’t helpful” and contributed to the political distractions.

“What I care most about this audit was not the process but whether it’s right or not right,” she said. “The results of this audit are awful and anything other than focusing on that is an absolute distraction.”

‘This is undermining Chief Arradondo’

On the evening of Sept. 18, before the Audit Committee meeting but after Arradondo’s press conference, Hodges posted comments on her Facebook page asserting that the changes the department made its camera policy in July are working. “The change was simple — requiring all responding officers to activate their cameras immediately after being dispatched,” she wrote. “This change makes more explicit our initial expectation that cameras be on for every 911 call. One month in, and we’re seeing results. From July 29 to August 27, the number of videos recorded are up 133% from the previous month. The hours of recorded video are up almost 260%. These are good numbers, but both the Chief and I agree that there’s still work to do.” (The message acknowledges that it was changed to correct an error in an earlier posting, which said that the audit didn’t include data from after the policy change when it did.) 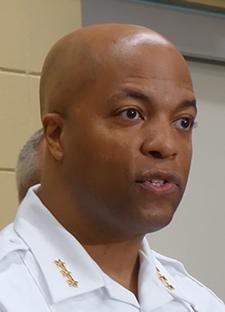 Hodges said Wednesday that she agrees with Gordon’s concerns about the timeline of the audit and considers it incomplete without the written response from the department. While she said she had been aware of the timeline, city staffers often return to council to ask for more time. “It is more important to get it right than get it quickly,” Hodges said. “Whatever the intention, the impact was to undermine the integrity of our independent audit function but it also had the impact of undermining Chief Arradondo. He deserved a voice in the process, that is best practice, and that is past practice and it wasn’t followed.”

The department should have had a chance to respond prior to release, she said, something she said would have enhanced the audit, improved the methodology and made the results more useful.

When asked why the department still hasn’t provided a written response to the audit, more than two weeks after it was released, Hodges said she would ask the chief, and said she knows they are working on a response.

“I’m used to people coming after me,” she said of the possible political motivations regarding the release. “Some people might not care if the chief is collateral damage in an election, but the community cares. This is undermining Chief Arradondo, which the community asked us not to do.”