On Sunday afternoon, several gathered at Marty’s Bar in West St. Paul to watch the big showdown between the Minnesota Vikings and the Green Bay Packers on TVs above the bar.

Just as the Minnesota-Wisconsin border roughly defines who’s a Vikings fan and who cheers for the Packers, the oddly-drawn border surrounding Marty’s roughly defines the denizens of this geographic anomaly, the West St. Paul neighborhood known as “the Forty Acres.”

The border of St. Paul, with Forty Acres notch, is indicated in green in the map above.

Less than a half-mile squared, the Forty Acres forms a funny little peninsula on the north side of West St. Paul, an otherwise rectangularly-shaped town. Marty’s, the kind of neighborhood bar where patrons rib one another and call each other by nicknames, is at the heart of it.

Passing through the Forty Acres on Dodd Road, the neighborhood’s main thoroughfare, you could be forgiven for thinking you were in St. Paul: if the border were a straight line, you would be. But no: for that third-of-a-mile stretch you are firmly in West St. Paul. Blink and you miss the little neighborhood and the few small signs that denote its existence. 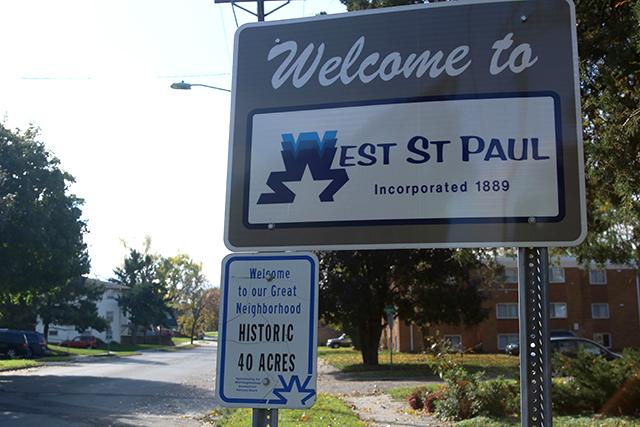 MinnPost photo by Greta Kaul
Blink and you might miss this little neighborhood.

Not every city is laid out in a perfect polygon, of course — there’s rivers, lakes, hills, roads and other attributes that affect the way civic lines are drawn. But it’s also not that often that you see such a small, defined protuberance as the Forty Acres on a map.

Before long, St. Paul proper was eyeing the parcel of land across the river, not the least of which because the city had built a bridge across the river for easier access. 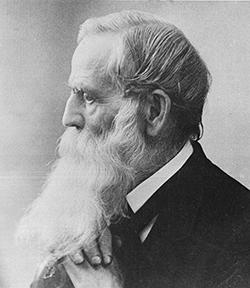 Courtesy of the City of West St. Paul
Philip Crowley

In 1874, the legislature passed an act that moved the boundary of St. Paul (and Ramsey County) from the Mississippi River to Annapolis Street on the west side. But they carved out one important exception to the Annapolis Street boundary: 40 acres of land north of Annapolis that included a farm belonging to civically engaged Irish immigrant Philip Crowley. Crowley was the superintendent of Dakota County schools and wanted to remain in Dakota County.

Just how Crowley managed to convince legislators to redraw the map for his own benefit seems to be buried in the annals of history. Bill Wolston, in a show called “90 Seconds of Local History” on Town Square Television in Dakota County, said in an episode about the Forty Acres that Crowley, who had worked for the city of St. Paul, was well-respected in the capital city, which may have given him some leverage in the matter. The Crowley house, at 763 Dodd Road, is still standing.

As to why West St. Paul would have agreed to give up a good chunk of its city to its neighbor, there were some sweeteners included. The deal made passage over the Wabasha Bridge, heretofore a toll road, free, and help rid parts of the township of West St. Paul of debts racked up by the erstwhile old city, according to the City of West St. Paul.

However the deal got done, voters approved the resolution — by a landslide in Ramsey County and an adequate margin in Dakota (the city claims the vote was nonbinding) — and thus, the oddly-shaped new border and the “Forty Acres” were born.

If you’ve ever been frustrated that the area directly south of St. Paul is called West St. Paul (it would be on the west side of the Mississippi if the Mississippi ran north-south, which it doesn’t), you can place some of the blame on Crowley.  In 1887, the Minnesota Legislature approved a proposal, supported by businesspeople who ran new stockyards and an industrial parks, to turn the township of West St. Paul, Forty Acres and all, into the city of South St. Paul.

That didn’t last long. According to the City of West St. Paul, Crowley helped lead a successful effort by residents of the area to get the legislature to establish a new city of West St. Paul, covering most of the recently established South St. Paul, in 1889. He became the city’s first mayor (according to his 1902 obituary in the St. Paul Globe, he got every vote), and held the post from 1889 to 1891.

Today, there’s nothing farmy about the Forty Acres, just a couple miles from downtown St. Paul, but it’s still pretty quiet. There’s Marty’s, an auto repair shop, Kennedy Park (where you can find a plaque commemorating the historic Forty Acres) and dozens of homes. There used to be a liquor store called Forty Acres Liquors, but it closed years ago.

That doesn’t stop the area from having a distinct identity, said Anthony Fernandez, the West St. Paul city council member who represents the area.

When he was meeting people in the area during his campaign for the seat, Fernandez said residents of the Forty Acres sometimes said they felt left out.

“They’re not a part of St. Paul, and sometimes they don’t feel like they’re a part of West St. Paul,” he said. So they’ve sort of developed their own identity.

“I think they feel like they’re kind of the sovereign nation of West St. Paul … some of the people over there really take pride in that,” he said.

While most people seem to be aware of the strange geography of the area, there are a few who  aren’t, Fernandez said. He once heard a story about someone moving to the Forty Acres, planning to run for an office in Ramsey County or St. Paul that required residency. 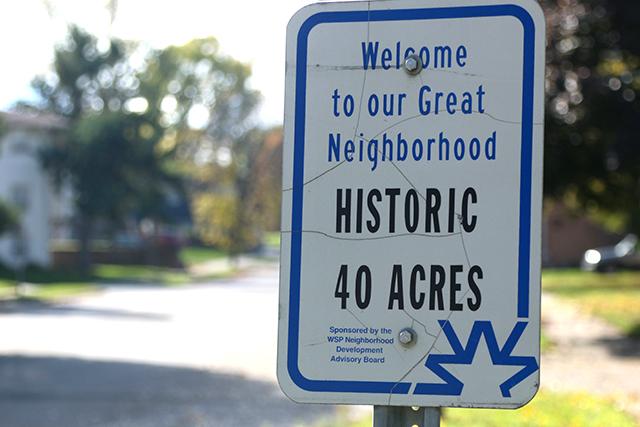 MinnPost photo by Greta Kaul
“I think they feel like they’re kind of the sovereign nation of West St. Paul … some of the people over there really take pride in that,” said West St. Paul City Council Member Anthony Fernandez.

“When he initially ran he didn’t know he’d moved into West St. Paul,” he said.

Andrew Garza, a Marty’s regular,  has lived in different parts of St. Paul just outside the Forty Acres for various parts of his life.

“St. Paul’s West Side and West St. Paul are two totally different spots. The Forty Acres is the happy medium in the middle,” he said.

What’s up with that strange notch on St. Paul’s southern border?