A series of additions to the Southwest Light Rail Transit project demanded by the BNSF railroad will not just cost the project money, it will now cost it valuable time.

The project staff decided Monday that it will need to conduct an additional environmental assessment on the project in order to study a 1.4-mile barrier wall that will separate light rail tracks from existing freight tracks.

The Metro Transit staff had initially thought a formal process would not be needed because the changes are within the footprint of the original and first supplemental environmental impact statement (EIS). But Metro Transit’s Deputy General Manager Mark Fuhrmann, in response to a question Monday, said that has changed. The decision came after Metro Transit staffers talked to the Federal Transit Administration.

“After reviewing all materials, the FTA informed the project office this afternoon that a Supplemental Environmental Assessment related to the addition of the proposed corridor protection wall will be required,” Fuhrmann said in a written response. “At this point, we don’t know what, if any, impact this will have on the construction timeline. We will be discussing this further with FTA and our project partners.”

The project has already faced numerous setbacks. A supplemental EIS was required when the route alignment was altered through the Kenilworth Corridor, something that triggered a second round of approval from local governments along the route. Two summers ago, the project had to pause while political leadership decided how to carve $300 million from the now $1.858 billion project. And this summer, the Met Council rebid the most-significant construction contract after it was forced to reject all of the initial bids.

There is also a still-unresolved lawsuit filed by neighbors of the route through Kenilworth.

Still, before this setback, the project staff had hoped to open bids in the first half of next year and start construction by the end of 2018. That would have put the project in line to accept passengers in 2022. Each delay is costly: Fuhrmann once estimated that a week’s delay adds $1 million to the project cost.

A formal process with public input

The change in approach by the staff came as state Rep. Frank Hornstein was backing a petition by opponents of Southwest LRT that could have forced an additional environmental review of the project.

Hornstein, a Minneapolis DFLer, said last week that additions to the project — including the barrier wall and the relocation of the tail track (the overnight storage track) for the Northstar commuter trains — should be studied. Hornstein is also concerned about the Met Council accepting more liability in the event of accidents between light rail and freight rail trains, which was also demanded by  BNSF in exchange for allowing the light rail to share a short section of its right of way. 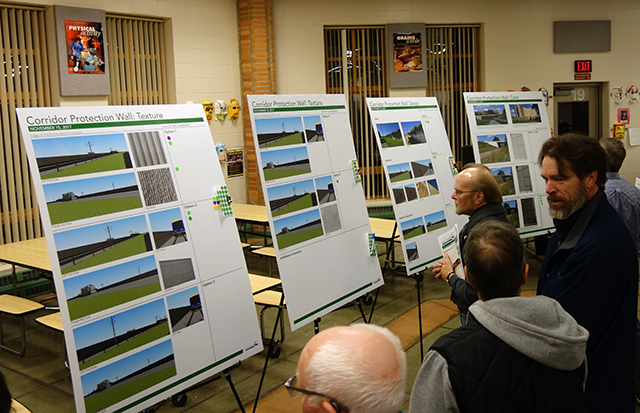 Hornstein called Metro Transit’s change in approach “a helpful development” because, while the process is less extensive than that of a full environmental impact statement, it is still a formal process with public involvement — and not fully internal to the Met Council.

“This seems to vindicate our position that there needs to be additional assessment,” he said. “It reflects our position since we heard about it over the summer and will allow for a more formal public review.”

Hornstein said he was told by Met Council staff Monday evening that it could add three months of delay to the project.

When the BNSF demands were made public in August, Southwest LRT senior staff told the Met Council they would not trigger formal environmental review and that the supplemental EIS accepted by federal officials in July of 2016 was broad enough to cover the changes.

“This is all within the current footprint so we see that that is not going to affect the environmental record,” project director Jim Alexander told a Met Council meeting in August, when the BNSF demands were reviewed and approved. “We don’t see there is really any impact on the environmental process at all.”

That changed Monday and negates the process Hornstein had been planning to use to force an additional review. Under state law, if at least 100 residents or property owners had signed a citizen petition — and that petition was found to be complete by the state Environmental Quality Board — the Met Council would have had  to make a decision on whether to conduct the environmental worksheet. That process is less rigorous than an environmental impact statement, but it can sometimes establish that a full EIS is necessary.

Hornstein has already expressed displeasure with not only the demands made by BNSF but by the lack of a public process by the Met Council once the demands were made public. Within days of telling a council committee of the deal with the railroad, the full Met Council had approved the agreement.

Hornstein and state Sen. Scott Dibble asked the council to slow down so the public could be heard from about the changes. “How is it that an addition to the project of this scale, with potentially great consequence, does not warrant even the most cursory consideration,” the two Minneapolis lawmakers asked. 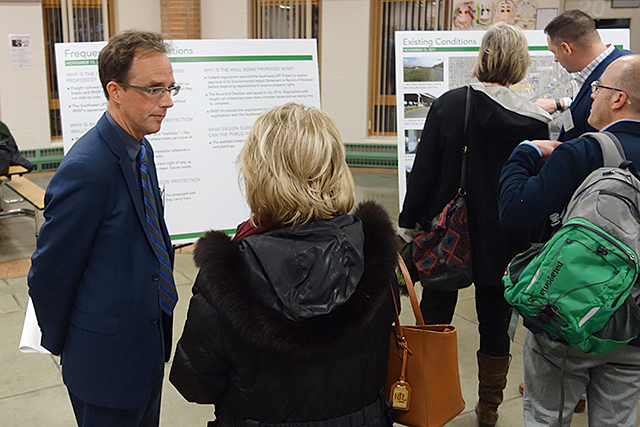 MinnPost photo by Peter Callaghan
Project director Jim Alexander, left: “We don’t see there is really any impact on the environmental process at all.”

“We, as elected local and state officials, call upon the Met Council to not wait to be instructed (by the FTA) and commit on its own accord to promptly prepare a Supplemental EIS regarding the construction and use of the proposed barrier wall and its impacts upon the community and the various users of the corridor,” the officials wrote.

At the time, Southwest LRT officials said the project was moving along quickly and it wanted to have railroad agreements in place to secure federal agreements that would have allowed a contractor to start work before the winter. But since then, the council has rejected all of the initial bidders for the project’s largest contract, the so-called civil construction contract, and restarted the bidding process.

The project office staff has acknowledged that the wall and other changes would likely trigger Section 106 of the National Historic Preservation Act, which says that any project having an “adverse effect” on historic resources eligible for listing on the National Register of Historic Places has to try to avoid, minimize and mitigate those impacts.

In the case of the wall and tail track, the historic resource is the actual right of way, which was part of the St. Paul, Minneapolis and Manitoba Railroad and the Great Northern Railway Historic District.

A review conducted by the Minnesota Department of Transportation on behalf of the Federal Transit Administration found that the right of way would be eligible for federal historic listing. It also found that the adverse impacts from the project include widening of the cut that accommodated the right of way, the removal of some retaining walls and the replacement of stone and concrete walls and earthen embankments with taller and modern retaining walls.

The Southwest LRT project office is asking the public to weigh in on the design of those replacements, the design of the barrier wall between light rail and freight tracks, and any historic makers that would relate the history of the area. Those designs were the subject for an open house last week at Bryn Mawr Elementary School, and project staff has also conducted pop-up events along the Kenilworth Trail.