DFL Sen. Dan Schoen will resign from the Minnesota Legislature his attorney announced Wednesday, two weeks after multiple women alleged the lawmaker had sexually harassed them during his time in office.

Schoen’s attorney, Paul Rogosheske, told reporters at a press conference [listen to the audio of the press conference here] that Schoen will resign on Dec. 15. Schoen did not appear at the press conference, but Rogosheske gave reporters a copy of the lawmaker’s resignation letter. “I am hurt by these allegations but I take them seriously,” Schoen wrote. “It was never my intention to make an inappropriate advance on anyone. Relationships — both social and collegial — can be hard to navigate, and tone is often lost in written communication. Despite this, if any of my actions or words have ever made another person feel uncomfortable or harassed, I deeply regret it and truly apologize.”

Rogosheske said Schoen, a first-term senator from St. Paul Park who previously served two terms in the House, is leaving office because allegations made it impossible for him to be “effective” to his constituents. There were multiple allegations against Schoen, but Rogosheske said the senator “never meant to sexually harass anybody” and allegations were either taken out of context or politically motivated.

On Nov. 8, MinnPost reported allegations from two women that Schoen, 42, had sexually harassed them. One of the women, Lindsey Port, a former DFL candidate for the House, said in 2015 Schoen came up from behind her at a campaign event and grabbed her buttocks, telling her she had a “good door-knocking ass.” Schoen, a first-term senator, was serving his second term in the House at that time.

Two weeks after the incident, Port reported it to then-DFL House Deputy Minority Erin Murphy, who told MinnPost she reported it to other leaders in the House DFL caucus. Former DFL Minority Leader Paul Thissen said he spoke with Schoen about the incident at the time.

Rogosheske said he spoke to people who were at the campaign event who denied Port’s account, but he declined to name those individuals. He also said Port, who now runs a campaign nonprofit called Blueprint Campaigns, threatened to tell people Schoen sexually harassed her if he ran for state auditor. Her business partner, Jon Tollefson, is running for the DFL endorsement for auditor. Rogosheske did not provide evidence of those conversations, saying they were “oral” communications to people in the DFL Party.

“It brings me no joy to see Senator Schoen resign, but it does bring relief to see that we can hold people responsible,” Port said in a statement Tuesday evening, before the press conference. “We have a choice as a society to make the necessary changes to protect people in the workplace from harassment, and I’m hopeful that doesn’t end with a few resignations, but with a renewed commitment to stand together and say ‘No more.’” 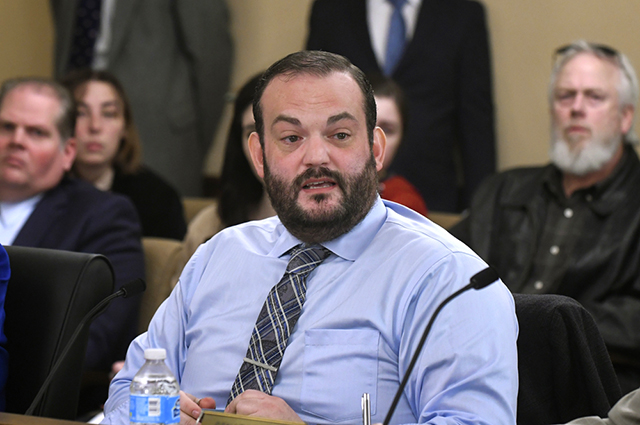 Photo by Tom Olmscheid/Workingpress Photo Agency
State Sen. Dan Schoen is leaving office because allegations made it impossible for him to be “effective” to his constituents.

Rep. Erin Maye Quade, DFL-Apple Valley, said she also had an uncomfortable experience with Schoen. In 2015 Maye Quade was a first-time candidate for the Legislature and also working as a constituent representative for U.S. Rep. Keith Ellison. During protests over the death of Jamar Clark, a black man who was shot and killed by a Minneapolis police officer, Schoen texted her and offered to give her the perspective of a police officer, Maye Quade said. He also repeatedly invited her out for drinks and to his home one evening, mistakenly texting Maye Quade: “‘I almost got her. Working on her pretty hard, but I almost got her,’” she said.

Rogosheske gave reporters packets of documents he claimed helped set the record straight, and offered a different narrative on Schoen’s intentions in interactions with Maye Quade. The documents included Facebook and text message communications between Maye Quade and Schoen.

“She reached out to him first,” Rogosheske said, providing pages of communications he said were retrieved from Schoen’s phone. However, the communications provided by Rogosheske did not include texts Maye Quade showed MinnPost, including the “working on her pretty hard”  one.

Rogosheske said they “retrieved what we could” from that time period. He said the message sounded, in substance, much like another one they retrieved, which appeared to be mistakenly sent to Maye Quade, that said: “So I’ve been counseling Erin Maye on public safety stuff as much as possible. Any other candidates in the district?”

Another woman, who asked not to be identified, told MinnPost Schoen sent her a photo of male genitalia over Snapchat. A week after the initial allegations surfaced, a second woman, DFL Senate staffer Ellen Anderson, said she also received a photo of male genitalia over Snapchat from Schoen.  She reported the incident to Senate human resources. Rogosheske said that photo was sent to Anderson, but it was intended to be sent to someone else. He did not address the other photo in the press conference.

“I thank Sen. Schoen for his five years of public service and for his decision to resign. Resigning is the best decision for his constituents and the Senate. The DFL Leadership team takes seriously the ongoing safety of our staff, those who work around the Capitol, and those who visit the Capitol,” Senate Minority Leader Tom Bakk said. “I applaud the courageous victims for coming forward and sharing their stories. Sen. Schoen’s resignation is only the beginning of the process to curtail this behavior in politics.”

The resignations are the latest in a sexual harassment scandal that has swept up the nation and now the Minnesota Capitol. Schoen will be joined in retirement by Republican Rep. Tony Cornish, who said on Tuesday that he plans to step down on Dec. 1 after serving eight terms in the House. He was facing an outside investigation into allegations that he propositioned lobbyist Sarah Walker for sex more than 40 times.

“We asked Representative Tony Cornish to offer his resignation from the Minnesota House of Representatives. Over the last week, it has become increasingly clear his resignation is the most appropriate course of action for him, his constituents, and our institution,” Republican House Speaker Kurt Daudt and Majority Leader Joyce Peppin said in a statement. “As House leaders, we will continue to take concrete steps to combat misconduct at the legislature and ensure a safe and respectful work environment for legislators, staff, lobbyists, and the public.” 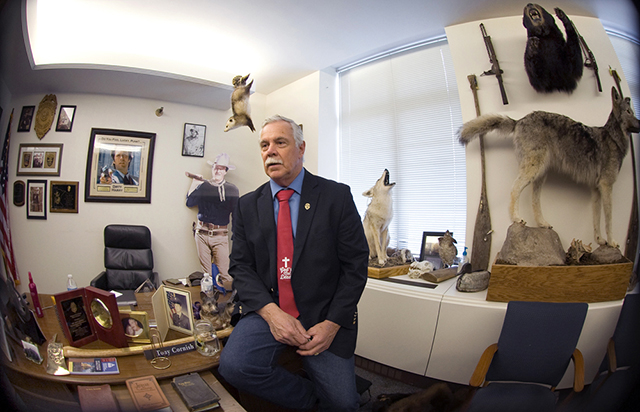 Photo by Tom Olmscheid/Workingpress Photo Agency
State Rep. Tony Cornish was facing an outside investigation into allegations that he propositioned lobbyist Sarah Walker for sex more than 40 times.

Cornish’s resignation comes amid an independent investigation and after an extensive report from MPR News that showed a pattern of behavior from the eight-term Republican that included sending messages to women about their appearance, talking about conquests he hoped to make and treating the Legislature like his own “personal dating pool.”

“As a proud former peace officer and longtime champion for public safety, I am forced to face the reality that I have made some at the Capitol feel uncomfortable, and disrespected. To those individuals and specifically the unnamed lobbyist, I sincerely apologize for my unwelcome behavior,” Cornish said in a statement. “I would also like to apologize to God, my family, my constituents, and friends for the mistakes I have made.”

Cornish, 66, said he reached an agreement “in principle” with Walker, who came forward Tuesday as the lobbyist who accused him of unwanted advances. The agreement stipulated that he apologize, resign and “provide each other with a mutual release of any claims against each other now and in the future.”

“No one should be forced to accept sexual harassment in exchange for the opportunity to work on issues in the political arena or anywhere else,” Walker said in a statement.

Both resignations must be submitted to the office of Gov. Mark Dayton, who will decide when to call a special election for the House and Senate seats. The southeast metro Senate district held by Schoen is represented by two Republicans in the House and will be hotly contested in a special election. Republicans hold a narrow 34-33 majority in the Senate. Cornish, who lives in Vernon Center, represents a solidly conservative district.

State Sen. Schoen to resign; says it was ‘never my intention to make an inappropriate advance on anyone’

By Briana Bierschbach and Greta Kaul