After three months of guessing and speculation, Minneapolis residents finally got a look this week at the inside workings of a handful of independent committees trying to influence this fall’s city elections.

The revelations came from the most recent campaign finance reports, which were due Tuesday, though some were still trickling in as of Wednesday. The reports cover the period from Aug. 1 to Oct. 26. And while they give a look inside the efforts of independent committees, they do not cover the critical final two weeks of the campaign, which means that any conclusions about what a given group has or hasn’t done — or who has or hasn’t contributed to them — must be followed by the words “so far.”

For example, the report shows that, contrary to rumors and fears, there was no corporate money thrown into the Minneapolis Works! campaign to support four City Council incumbents, two challengers and one open-seat candidate … so far. It also shows that the Minnesota Jobs Coalition, the much-despised statewide political committee that has worked to switch the state Legislature from Democrat to Republican, has not given money to that same campaign … so far.

If the Jobs Coalition is doing any mailings on its own, they haven’t shown up in mailboxes yet. The organization will not have to report on its activities until it has to submit its next report to the state, on Jan. 31.

However, the money Minneapolis Works! did report also provided some surprises. The committee raised $99,902 in the three-month period, bringing it a total of $111,902. The money came heavily from downtown business people, and most heavily from developers and real estate interests. There is also money from two unions — Laborers District Council and Engineers Local 49. The largest amount, however, came from a single source — James Lawrence, who gave the committee $60,000. Lawrence was a big donor to Hillary Clinton’s presidential campaign and had looked into being a DFL candidate for Congress. His wife, Mary G. Lawrence, was briefly a DFL candidate for the congressional seat vacated last year by John Kline before stepping aside in deference to Angie Craig.

Minneapolis Works! has been active in seven wards, with mailings that are both promotional for the candidates they support and critical of rivals. The group also spent $26,500 for “polling/consulting/research” with the 1858 Group in St. Paul. The president of that group is Mark Drake, the former head of the Minnesota Jobs Coalition.

This report might have helped partly insulate Minneapolis Works! from accusations of being what critics say is a right-wing Republican PAC, at least for the time being. Any additional contributions that would change that narrative won’t be reported until long after the election is over.

But in what was a surprise, the Minnesota Jobs Coalition did give money to another city independent expenditure committee: Save Our #1 Parks. The group was formed by outgoing members of the Parks Board and is backing its own slate of candidates in opposition to a slate put forward by Our Revolution, the political group that spun out of the Bernie Sanders presidential campaign. Save Our #1 Parks is also backing at-large candidate Mike Derus and District 6 candidate Bob Fine.

Half of the committee’s $30,700 came from the Jobs Coalition, and it took another incumbent who is seeking re-election — and who was endorsed by Our Revolution — to point out that the Jobs Coalition isn’t exactly a friend of city parks. Brad Bourn tweeted out a photo of an old mailing used to defeat two northern Minnesota DFL legislators, Joe Radinovich and John Ward. The mailing accused the two of being too close to Minneapolis liberals, citing as evidence their support for “$8 million on a sculpture garden in Minneapolis ….” The money raised by Save Our #1 Parks so far has been spent on advertising in community newspapers. 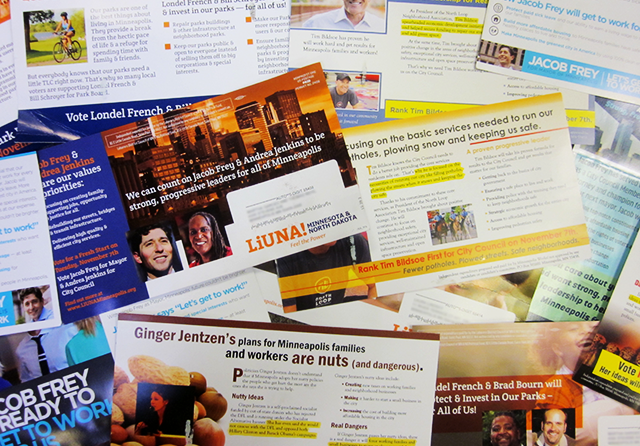 While much attention has been paid to Minneapolis Works!, another committee quietly outraised the business-oriented PAC. Fresh Start Minneapolis reported collecting $153,000, with most of that money, $122,000, going to a Washington, D.C., political consultant, Field Strategies, for “canvass.” Pro-Jacob Frey literature sponsored by Fresh Start has been delivered to homes around the city.

Another union has funded the committee Minneapolis Forward. SEIU HealthCare and SEIU Local 26 pooled $28,000, money that has been spent almost exclusively on social media ads. The committee is working for the re-election of Mayor Betsy Hodges.

Mayoral candidate Tom Hoch is the potential beneficiary of Let’s Do Better Minneapolis. The committee raised $13,350 from individual donors. Of that, $7,000 has been spent with the Maccabee Group of Bethesda, Maryland, an online marketing agency that works primarily with businesses and nonprofits.

Yet another committee, Friends of the Warehouse District — formed by restaurant industry owners and workers who advocated for a tip credit in the city minimum wage ordinance — showed $9,100 in contributions and $9,000 in expenditures, all for Comcast outdoor advertising. Based on its Facebook page, the committee is pushing the candidacies of Hoch for mayor, Tim Bildsoe for City Council in Ward 3, and Blong Yang for the council in Ward 5.