Could the future of parking ramps in Minneapolis be rampless?

New regulations governing the construction of parking ramps (“garages” according to the city code) includes encouragement for developers to design new ramps that would allow them to be converted into commercial or residential uses in the future — if demand for parking declines.

It is a small part of sweeping changes in what the City of Minneapolis will now allow in new downtown ramps, the bulk of which involve allowing public parking ramps to be built above ground in exchange for design elements that make them less obtrusive and that mandate “active uses” on street-facing façades.

But the conversion aspect reflects a growing dilemma for cities: How do they meet parking shortages at a time when trends suggest there will be reductions in future demand? What happens when increased transit use and even self-driving cars diminish parking demand? And what could be done with the hulking ramps that urbanists despise but commuters still want and need?

The city’s new rules won’t require ramps to be designed with the ability for conversion, since there are still doubts as to whether constructing parking ramps with flat floor plates and higher ceiling clearances is financially feasible, said Jason Wittenberg, manager of land use, design and preservation for the City of Minneapolis. “What we heard from architects and developers is that typically it would be cost-prohibitive to develop a ramp with features … to facilitate conversion,” Wittenberg said.

Casey Wagner, the chief operating officer for Walker Consultants, a consulting firm with 18 offices nationwide that specializes in parking, said that while there are significant differences between parking uses and commercial and residential uses, there is no doubt that in many large cities, parking demand is declining. And while surface parking will be the first part of the supply to be converted to other uses, there could come a time when structured parking will be next.

Wagner, who works in the Houston office, said he advises clients to “future-proof” their designs. “If parking demand is going to decrease, what can we do in design to make sure we allow for other uses,” he said. Having retail at street level is one way to do that, he said, but so is having interior spaces set aside for pick up and drop off for on-demand ride services like Uber and Lyft. “We’ve talked with owners about that, just thinking forward five-ten years so they’re not stuck with an asset that’s a dinosaur,”  he said.

Wagner generally agreed with Wittenberg that it is unlikely that stand-alone parking ramps (referred to as garages nearly everywhere but Minnesota) will be built with conversion in mind. But another requirement of the new Minneapolis code might also lead architects and developers to allow for future conversion as they design buildings. 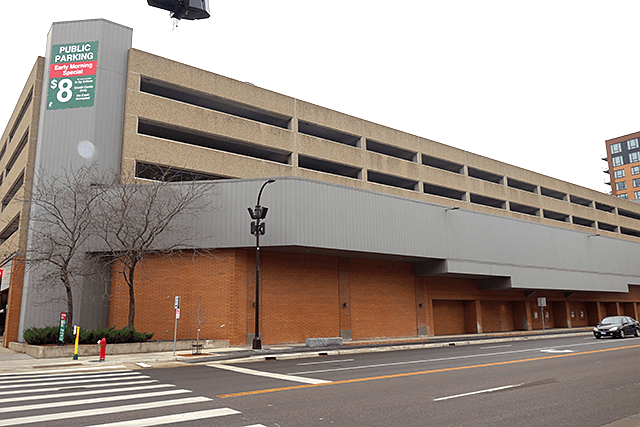 MinnPost photo by Peter Callaghan
Jason Wittenberg: “OK, we understand the need to provide parking but we don’t want it to be done in a manner like the Gateway Ramp [above] or the A-B-C Ramps where you have a whole block of nothing but parking.”

The new code changes a decade-old requirement that “principal parking garages” — those that are open to the public — be below ground. If a developer wants to place parking above street level, they must line those floors with what are called active uses, usually commercial or residential spaces. That could mean a garage connected to separate structures fronting the street, as it is with the Mill City Quarter ramp near the Guthrie. Or it could mean that the ramp and the commercial uses share the same floor plate, as is the case in two buildings being constructed in the North Loop.

“The kind of building where you already have parking sandwiched between occupied space, that construction type is already fit for that so the conversion is pretty simple going forward,” Wagner said. “But when you have a stand-alone garage with long-span construction, then it becomes a less desirable building to convert. You have to start dealing with columns on the exterior, the sloping floors. That’s when you start thinking it is better to tear it down and start over.”

One of those North Loop buildings, 419 Washington, is being developed by Swervo Development and CPM Cos. Aron Johnson, the project manager for DJR Architecture, which designed the building, said the design contains many of the elements that will be required in the new code, something he attributes to existing historic district rules and the peculiarities of the site. The building will have three floors of below-ground parking and five-floors of above-ground parking, while commercial space will occupy the upper floors of the building.

But even on the street-facing floors that contain parking, the design will have retail and commercial spaces facing the street. While that is already required in historic districts, Johnson said the feature was in response to the desires of the neighborhood association, who wanted parking but also wanted the building to fit in with historic structures.

The building was also designed to allow future conversion of the parking levels. “How we designed the ramp was to be flat-plate construction so that there would be the possibility of converting that to office space if the need goes down,” Johnson said.

The building will also meet another desire of the city. Three of the floors will be available for public parking, an important feature in a neighborhood that often complains about a shortage of spots.

Yet the convertibility of the parking to commercial office space was cited by opponents of the building’s height as a reason to deny approval — that the parking was simply a way to get neighborhood association approval and would be converted later, exacerbating rather than easing the neighborhood’s concerns over the issue.

Another North Loop building under construction will have a similar layout. The 729 Washington, an office building being developed by United Properties, will be connected by a parking structure on 3rd Street North. But that ramp will have 44 micro apartments facing the street with parking levels behind them.

The broader changes to the city code adopted by the Minneapolis City Council Friday are in response to concerns from developers about the current parking requirements, especially the demand that garages that are open to the public must be below ground unless they are part of a transit center. Developers currently can build parking above ground only if it is for building tenants. “That has made it pretty impractical to create parking in a district-parking kind of strategy,” Wittenberg said.

It also might have discouraged redevelopment of surface lots whose owners want to continue to serve current customers in a new building but don’t want the expense of digging for underground parking.

In return for providing more flexibility in the rules, the city wants parking ramps better screened with “active” uses, not just with screens and fencing. And stand-alone ramps that have no other uses will continue to be banned. Also, no ramps will be able to face the newly reopened Nicollet Mall.

Wittenberg summed up the theory behind the new rules like this: “OK, we understand the need to provide parking but we don’t want it to be done in a manner like the Gateway Ramp or the A-B-C Ramps where you have a whole block of nothing but parking.”

The current code required a public use — retail, restaurant or office on the street level — but Wittenberg said the new code takes that a step further and requires such uses all the way to the top of the building. It also demands better blocking of headlights and overhead lights and will no longer allow unscreened parking on roof levels. 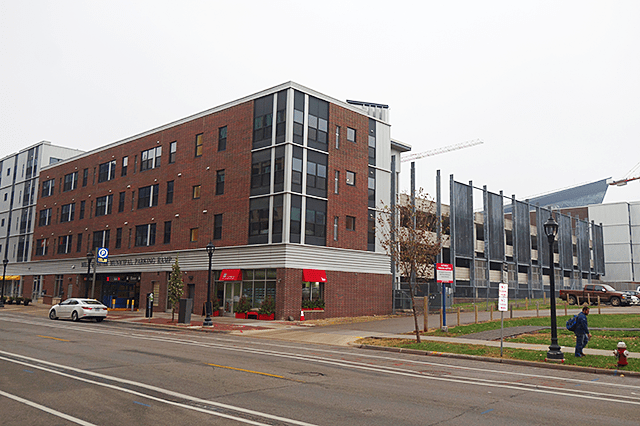 MinnPost photo by Peter Callaghan
The Mill City Quarter ramp near the Guthrie is considered “the gold standard for above-ground ramps.”

Unlike the current code, the new rules will also allow a developer to attempt to show that meeting the requirement to have other uses on the entire street facade would be impractical. The city could then require architectural solutions, such as better designed façades above ground level. An example Wittenberg cited is the new 4Marq building that was on such a small footprint that there wasn’t enough room to have active uses with parking concealed behind it.

Wittenberg pointed to the Mill City Quarter ramp near the Guthrie as “the gold standard for above-ground ramps.” It already has residential buildings on three sides, and construction on another piece of land on Park Avenue will eventually complete the enclosure.

Why the future of Minneapolis parking garages may not include parking