It’s not the beginning of the end for the Riverview Corridor transit project, the long-discussed connection between downtown St. Paul and Minneapolis-St.Paul International Airport. After all, even if all goes as planned, construction won’t begin until 2025 and passengers won’t be served until 2027.

But a Thursday vote by the elected and appointed officials charged with picking a route and a mode of transit could be considered the end of what has been a very long beginning.

While mindful of the tortured path for mass transit projects, the members of the policy advisory committee took some pleasure in reaching a threshold decision known as the locally preferred alternative.

Tim Busse, a Bloomington city council member, recalled that when his then-city manager asked him to represent Bloomington on the advisory committee, “He told me it would be about four or five meetings.” Thursday’s final meeting was the 39th gathering of the group.

According to the plan approved by the committee Thursday, a streetcar — running partly amid traffic and partly in dedicated space — would use West 7th Street to travel from downtown’s Union Depot to the Mississippi River before crossing the river on a new bridge built near the Highway 5 crossing. It then will tunnel beneath Fort Snelling before connecting to the Blue Line tracks near the Fort Snelling Station.

That’s 11.7 miles and 20 stations. Staff estimates are that 20,400 passengers will ride on the average weekday by 2040. Construction costs, in 2025 dollars, will range from $1.4 to $2 billion, with funding proposed to be shared by the Federal Transit Administration and Ramsey County via a recently approved transportation sales tax.

The vote of the advisory committee completes a three-year process known as the Pre-Project Development Study. Now, local governments affected by the route — St. Paul, Minneapolis and Bloomington, Ramsey and Hennepin counties and the Metropolitan Airports Commission — will be asked to agree to the plan. Then, if the Met Council accepts it as a regional project, another batch of committees will be formed.

‘Hey, we’re millennials, and we want this’

This is the second run at enhancing transit between St. Paul and the airport. Nearly 20 years ago, the route was set to be the region’s first light rail line, but fell out of favor when businesses and residents objected to the disruptions. It was then in line to become Metro Transit’s second bus rapid transit service before being set aside for an examination of whether it would be better served by light rail.

Earlier in the process, however, light rail was eliminated as a transit mode, again over concerns that both construction and operations would disrupt West 7th Street and its retail, restaurant and entertainment businesses. Modern streetcars are seen as a compromise that maintains the capacity of light rail with fewer conflicts, with no dedicated travel lanes and shorter trains.

Thursday’s vote was no surprise. The same group had already given preliminary approval in October so that the proposal could go out for public comment, and a technical advisory committee approved the plan November 30. 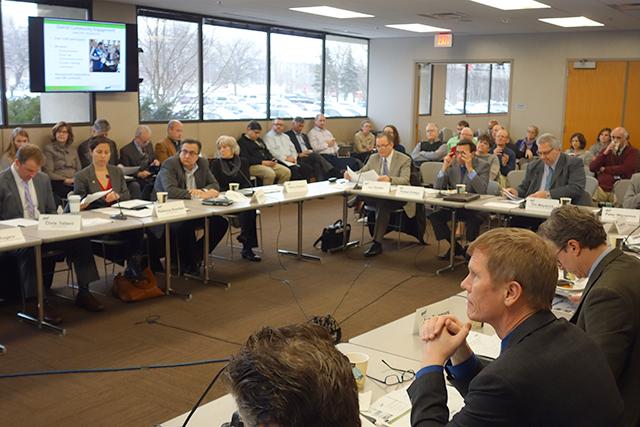 MinnPost photo by Peter Callaghan
Thursday’s final meeting was the 39th gathering of the advisory committee.

Among those voting yes Thursday were representatives of the airports commission, the St. Paul Area Chamber of Commerce, the Met Council, the city of Minneapolis, the city of St. Paul, Ramsey County and the Minnesota Department of Transportation. The vote is an official part of the process and now allows the rest of the approvals and planning to move forward.

Voting no on the plan were Pat Mancini, who owns Mancini’s Char House on West 7th and represents the business community along the corridor, and Laurel Severson, who represents the communities along the corridor. Mancini said he was impressed at the turnout at the November public hearing. “I was very impressed with the millennials who came out and said, ‘Hey, we’re millennials, and we want this,’” Mancini said. “I get it. It’s the future. It’s what they want.”

But Mancini said he is on the panel to represents businesses, not millennials, and his conversations with the business owners showed that they are still worried about the impact of the line — and skeptical of promises to mitigate the damage from construction. The West 7th Business Association favors improved transit, but has said that a bus rapid transit system like the A Line connecting Rosedale Mall and the Blue Line in Minneapolis would provide better service with far fewer disruptions.

Ramsey County Commissioner Rafael Ortega, who said he has been working on this issue almost since first taking office in 1995, said the county will “do our best to mitigate that. This is still out a few years and we will continue to work on this to get it to a point where we can get a good consensus.”

A pledge to re-examine issues

St. Paul Council Member Rebecca Noecker, whose representative voted against the plan in October, said she now supports what she termed a “not uncomplicated decision.”

“I feel a mixture of excitement and anxiety and nervousness about this decision today,” she said. But she said the studies and discussions show the streetcar meets the needs of the region.

“I think it has the best opportunity to get people out of their cars and relieving some of the traffic congestion and parking issues that, frankly, we’re already facing on West 7th Street and downtown,” Noecker said.

Before the final vote, Noecker offered a resolution that pledged to examine and resolve the issues raised by businesses and the neighborhoods the line will pass through. Those issues include pedestrian and bike rider safety; streetscape improvements on West 7th; mitigating construction impacts; continued planning to assure that the Ford Site and neighborhoods north of it have transit connections to the Riverview Corridor; planning to assure that West 7th neighborhood is recognized as a unique neighborhood and not just a way to get to and from downtown. 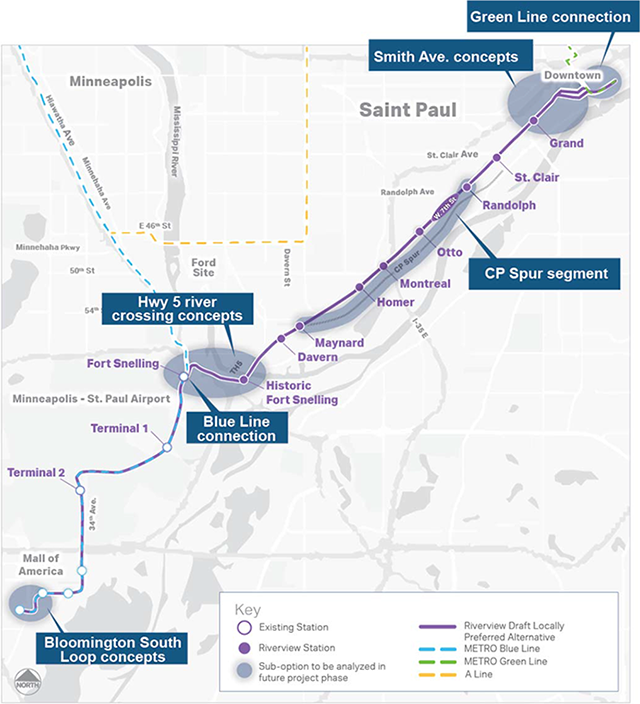 Noecker also wants the policy advisory committee to reconvene in three years to evaluate the project and its chances for securing federal money. If it appears the corridor will not be under construction by 2025, the committee can then look at changes.

The latter point reflects concerns that the project might not be rated highly enough under federal criteria to compete with other transit projects around the country. Advisory staff estimates that it will receive a “medium” rating, even while other projects in the state like Southwest Light Rail Transit and the Bottineau extension of the Blue Line are currently rated “medium-high.”

Another look at servicing the Ford site

Due to cost and travel time, early on the committee had dismissed a route that swung north through the former Ford assembly plant property and crossed the river on or near the Ford Parkway Bridge. But St. Paul’s decision to redevelop the property as a relatively dense residential and commercial neighborhood has put a premium on improved transit connections.

The approach taken by the advisory committee Thursday was to request another study of transit service in and around the Ford site. That study, yet to be commissioned by Ramsey County, would look at how to serve the area and could lead to another locally preferred alternative with both a route and a mode of travel. One suggestion, for example, is to build a transit spur that would connect the Ford site to the Riverview corridor before it crosses the river near Hwy. 5.