After three years of activity, dozens of rallies and protests, thousands of signatures and hours of City Council meetings, the fate of the state’s only local minimum wage ordinance was being decided Friday in a courtroom by a single judge before just a handful of onlookers.

Hennepin County District Court Judge Susan N. Burke heard more than two hours of arguments from attorneys representing the Minnesota Chamber of Commerce and the City of Minneapolis. At issue was whether to block that minimum wage ordinance before it starts its six-year phase-in Jan. 1.

The case brought by the chamber and other groups and businesses asserts that the city does not have a legal right to act on minimum wages separate from the state.

“For more than 100 years, Minnesota regulation of minimum wages has been exclusively governed by state law,” said Chris Larus, the lead attorney for the chamber. And 40 years ago the state Legislature adopted the Minnesota Fair Labor Standards Act, he said. “Exactly one month from today, Minneapolis intends to disrupt the Minnesota Legislature’s longstanding and comprehensive regulation of minimum wages.…”

But Assistant City Attorney Sarah McLaren told Burke that the workers who would have to wait longer for a pay raise would suffer more harm than businesses. And she argued that there are benefits to businesses from the higher wages in the form of lower turnover and healthier employees.

“Employees … are anticipating a higher wage as of Jan. 1,” McLaren said. “The record is replete with the impacts — the health impacts, the economic impacts, the societal impacts — of the current status of the minimum wage and the benefits that are expected to be realized as that is raised above the state minimum.”

Burke could rule on the legal issues themselves based on briefings, affidavits and Friday’s arguments. That is what the chamber’s attorneys are asking. But the city told her it thinks there are facts that can only be found by a process of discovery and trial.

It appeared that Burke is likely to let it go to trial, as Judge Mel Dickstein did with the paid leave case. That left her choices either to block enforcement of the ordinance in order to let the legal proceedings run their course or to let the first wage hike — 35 cents per hour for employees of businesses with 100 or more workers — take place next month while the courts review the ordinance.

Burke said she would have a ruling “shortly.” Larus said afterward that he thinks that is more likely to mean days rather than weeks.

Many of the legal issues are similar to last year’s legal challenge of the city’s mandatory paid leave ordinance. In that case, Dickstein ruled that the city was likely to win on the question of whether it had authority to act independently from the state. But he did issue a temporary restraining order that has prevented the city from enforcing the ordinance against businesses that don’t have a physical presence inside the city limits. 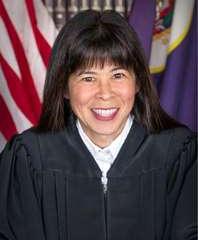 That case was appealed to the state court of appeals, which agreed with Dickstein on both questions. The Minnesota Supreme Court this week refused to take up the chamber’s appeal. The chamber will drop its case on the question of legal authority, but Minneapolis City Attorney Susan Segal said Friday the city would seek a trial on what is called the extraterritoriality issue — whether the city can enforce the paid leave ordinance against businesses outside the city but that send workers into the city.

That case took a year from when Dickstein first heard the case to when the Supreme Court let the appeals court ruling stand. Burke was aware of that in her questioning of attorneys Friday, wanting to know how long it might take to resolve the issues. If she enjoins the ordinance, for example, she wanted to know how long employees would go without the raises promised by the ordinance. Conversely, if she refused to grant the injunction the chamber seeks, how long would businesses have to pay what might eventually be ruled an invalid local minimum wage.

The issues Friday were more than procedural, however. Burke has to decide whether the chamber or the city is likely to prevail in the end. And she has to determine whether either would suffer “irreparable harm” in the meantime.

If she can’t find that the chamber and the businesses it represents would suffer irreparable harm, McLaren said, the temporary restraining order should not be granted. But Larus said out-of-town businesses would have to acquire systems to track the hours that employees spend inside the city. And the extra wages could not be recovered if future courts find any parts of the ordinance invalid.

The heart of the case

The heart of the legal issue is whether the state pre-empts local governments from having their own minimum wages. As with the paid leave law, there is no specific section of state law that blocks such local actions. But Larus said case law prevents local governments from adopting ordinances that conflict with state laws — sometimes described as passing ordinances that prevent what the state law permits.

In this case, Larus said, the state “permits” businesses to pay the state minimum wage — $9.65 come January — while the ordinance would prevent Minneapolis employers from doing do. Instead, large businesses would have to pay $10 on Jan. 1 and $11.25 on July 1.

But McLaren argued that the state law is a floor, not a ceiling. As long as a local wage ordinance was at least as high as the state minimum wage, cities should be free to require a higher wage. That legal authority is especially clear for cities like Minneapolis that are charter cities — the 100 or so cities in the state that have adopted local charters and are not subject to all of the laws that govern so-called code cities.

“Minneapolis is a home rule charter city and as such it has the same regulatory authority within its boundaries as the state Legislature,”McLaren said. “That is not the case if a state law has limited or otherwise withheld that power.” What, therefore, is legislative intent, she asked. Has the state Legislature shown that it intends to take away minimum wage authority from Minneapolis? McLaren said it has not.

And McLaren said the state law and city ordinance are not in conflict if an employer can abide by both, something she said can be done by paying at least the state minimum wage and then the higher local wage.

But Larus told the court that explicit pre-emption is not the only type that could block local actions. State courts have also found that if the state law is so broad and pervasive that there is no room for additional local regulation something known as field pre-emption exists. That is, the state has fully occupied the field and cities cannot act independently.

Dickstein and the court of appeals found that such field pre-emption does not exist in the case of paid leave. (“Given the sparsity and narrowness of statutory provisions of the subject matter, the district court reasonably concluded that the Legislature has not indicated an intent to occupy the field,” the court of appeals decision states.) State laws don’t require any paid leave and only detail what must be included if employers voluntarily offer paid leave. State minimum wage laws, however, are mandatory and date back 100 years, Larus said. They cover every employer and employee in the state.

Extraterritoriality is a troubling issue for minimum-wage proponents. Already businesses physically located outside the city are not required to allow workers to accumulate paid leave. If Burke finds that those same businesses are exempt from the minimum wage, it could provide a way for the employers of some of the lowest-wage workers — janitorial or home care workers — to pay the state wage rather than the higher city wage.

The district court in the paid leave case upheld Dickstein’s finding that “the chamber would be harmed in the absence of temporary relief by ‘expending substantial time and resources in advance of the ordinance’s effective date in order to comply with its mandates .…’ ”