The toppling of a United States senator has set off a historic chain of events in Minnesota politics, one that’s left top officials and candidates scrambling ahead of a critical election year.

U.S. Sen. Al Franken said Thursday he will resign from the chamber “in the coming weeks,” after several women accused him of groping or forcibly kissing them.

There will be an election to replace Franken next November, two years ahead of schedule. But first, DFL Gov. Mark Dayton has a major decision to make. He gets to pick who will serve until the election, and many are wondering if Dayton will appoint a placeholder senator — someone who will serve in the office but won’t run to remain in the seat after 2018 — or a person who can hit the ground running and get a headstart on next fall’s campaign.

Dayton hasn’t given any indications of his thinking on the matter. “Events have unfolded quickly,” he said in a statement Thursday. “Thus, I have not yet decided on my appointment to fill this upcoming vacancy. I expect to make and announce my decision in the next couple of days.”

Regardless, the race will attract plenty of interest, from both DFLers and Republicans, in an election year that will feature plenty of other races on the ballot, including U.S. Sen. Amy Klobuchar’s reelection bid; an open governor’s seat; three other constitutional offices; as many as five competitive congressional seats; and the entire Minnesota House. Some of the candidates currently seeking the governor’s office or congressional seats could switch gears and run for the Senate, dramatically reshaping the field.

First, though, Dayton will need to decide whom to appoint to fill the vacancy created after Franken resigns. Many say a woman should be appointed to fill his seat, especially in the wake of Franken’s sexual harassment scandal and the national moment of reckoning on the issue. Franken himself referred to his replacement as a “her” in his resignation speech.

Such a decision would be historic. With Klobuchar already representing Minnesota in the Senate, a female appointee would mark the first time in state history two women represented Minnesota in the chamber — something that’s happened in only a few states.

“Given the circumstances of Franken’s resignation, it would be a great opportunity for him to appoint a woman,” University of Minnesota political science professor Eric Ostermeier said. “It does also give the party and the state a chance — a state which has a no history of electing a woman to the governorship — to have two female U.S. senators.”

The most-mentioned possible short-term replacement for Franken is Lt. Gov. Tina Smith, who considered running for governor this fall but ultimately backed away from the race. Before getting into politics, Smith attended Stanford University and went on to earn an MBA from the Tuck School of Business at Dartmouth College. She landed in Minnesota after taking a marketing job at General Mills and eventually started her own marketing firm. 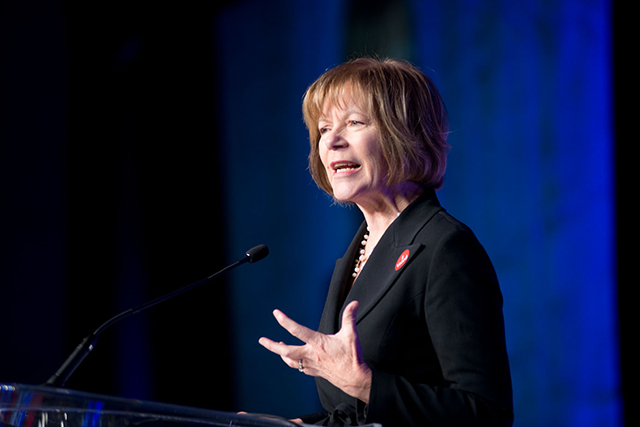 MinnPost file photo by Bill Kelley
In a statement responding to Franken’s resignation Thursday, Lt. Gov. Tina Smith thanked him for his time in office but gave no indication that she’s potentially heading to the Senate.

She got her start in DFL politics in the 1990s as a volunteer, eventually becoming the vice president of Planned Parenthood of Minnesota, North Dakota and South Dakota. She served for years as Minneapolis Mayor R.T. Rybak’s chief of staff before joining Dayton’s campaign team for governor. She served as Dayton’s chief of staff during his first term before running to be lieutenant governor in his second term.

Appointing a sitting lieutenant governor to the Senate would also have implications for the Minnesota Legislature. The state Constitution says the president of the state Senate, Republican Michelle Fischbach, would become lieutenant governor in the case of a vacancy.

But Republicans currently control the chamber by a single-vote margin of 34-33, and losing Fischbach could set up a tie in the chamber. There’s no precedent for this situation in Minnesota history, and some lawyers are already looking into whether the Senate president can refuse to move into the job of lieutenant governor.

In a statement responding to Franken’s announcement Thursday, Smith thanked him for his time in office but gave no indication that she’s potentially heading to the Senate. “Sexual harassment can never be tolerated in our politics, our businesses, or anywhere else,” she said. “Now, it is on all of us to come together and make the progress necessary to live up to the values we believe in. Governor Dayton and I remain committed to ensuring that Minnesota is a place where everyone has the opportunity to realize their full potential.”

Other women mentioned as possible appointees to Franken’s seat include St. Paul DFL Rep. Erin Murphy, who is currently running for governor, and Attorney General Lori Swanson, who is rumored to be considering a run for governor. Several state legislators have also been mentioned as possibilities, including Edina Sen. Melisa Franzen and Minneapolis Rep. Ilhan Omar.

And then there’s next November. With so many competitive races on the ballot, Minnesota was already going to be a target for national groups during the 2018 election cycle. Adding a second Senate race just makes it even more critical in the calculation for Democratic and Republican groups nationally as they look to who will control Congress in 2019.

“National groups know that if they want to do well, they need to well in Minnesota,” University of Minnesota political science professor Kathryn Pearson said.

Despite the fact that Minnesota Democrats have multiple seats that are now vulnerable in the next election, Pearson said 2018 looks like a good year for the party. “The party of the president nearly always loses seats in the midterm, and combined with the fact that Trump is extremely unpopular, it’s shaping up to be a good year for Democrats,” she said.

The situation “doesn’t fill me with panic,” said Javier Morillo, a longtime DFL activist and president of Service Employees International Union (SEIU) Local 26. “The top of the ticket will be Amy Klobuchar, who is very popular around the state,” he said. “And having enormous amounts of national resources in a year that is going to be a nationalized election is not a bad thing.”

Other than the aforementioned women who could step into the Senate, operatives say there are other candidates who could quickly launch a statewide race for the Senate. That includes former Minneapolis Mayor R.T. Rybak, who ran for governor in 2010, and U.S. Rep. Tim Walz, who is currently running for governor. Progressive groups and candidates are also encouraging DFL U.S. Rep. Keith Ellison to be appointed and run for the Senate.

Many are looking to see what former Gov. Tim Pawlenty might do. He said earlier this year that he was “politically retired,” but many think he’s leaving the door open to running for either governor or the Senate next fall. Pawlenty first considered running for the Senate in 2002 before he ultimately sought the governor’s office. Others say current Republican Minnesota congressional Reps. Tom Emmer and Erik Paulsen could jump in the race, and Republican state Sen. Karin Housley said she’s discussing a run with her family.  Former Republican Sen. Norm Coleman, who lost to Franken in a close recount in 2008, said he doesn’t plan to run for the seat in 2018.

Looking back in state history, openings like this don’t come around all that often. Since the 1930s, governors have only appointed six people to the U.S. Senate, according to the Minnesota Legislative Reference Library.

In 1976, after Gov. Wendell Anderson resigned from office and Lt. Gov. Rudy Perpich became governor, Perpich appointed Anderson to the Senate to replace Walter Mondale, who had been elected vice president. In 1978, Muriel Humphrey was appointed to the Senate by Perpich to finish the term of husband Hubert H. Humphrey when he died. She didn’t run for the seat when it came up on the ballot. That fall, two Republicans were elected to the Senate, David Durenberger and Rudy Boschwitz. That was also the last time both Minnesota Senate seats were on the ballot at the same time.

That election became known as the “Minnesota Massacre,” with some saying voters lashed out at Democrats for Anderson trying to anoint himself a U.S. Senator. Observers have pointed to that election as a cautionary tale for Dayton as he considers who should take Franken’s place, and that he should avoid the appearance that he’s hand-picking the person who will serve and have a leg up in the Senate race. But others say the Franken appointment represents a dramatically different circumstance: Anderson all-but appointed himself to the Senate, an act of explicit self-interest that miffed voters.

In 2002, then-Gov. Jesse Ventura appointed Dean Barkley to serve the remainder of Sen. Paul Wellstone’s term after Wellstone was killed in a plane crash weeks before the election. Coleman ultimately won that election.

Barkley said he managed to get a lot accomplished, despite the fact that there were only about 10 working days left in the term by the time he got there. He passed a Wellstone memorial bill and was a key vote in the Senate on at least five other issues before he left.

Whether or not they plan to run for the seat, he said, Franken’s replacement can jump in and do plenty of work before 2018 election. “I knew it was a two-month appointment and I made the best of it,” he said. “I knew what I was doing and I knew what I wanted to get done and I figured out a way to do it. It depends on how much energy they want to put into the job.”