Bitter infighting, explosive tell-all books, organizational chaos — all of these things have plagued a major Washington political institution over the past year.

If the White House came to mind, you wouldn’t be wrong. But things haven’t exactly been perfect at the main organization tasked with countering that White House: the Democratic National Committee.

Nearly a year ago, Democrats elected new leadership at their central national organization, selecting as their chair Barack Obama’s former labor secretary Tom Perez, who moved to make DFL Rep. Keith Ellison, runner-up in the race for chairman, his deputy.

The duo faced a tall order for 2017: lead the charge against President Donald Trump and the Republicans, all while rebuilding a party committee that had suffered from years of organizational neglect and mismanagement, while also healing the deep wounds left over from a contentious 2016 primary that alienated many Democrats from their party.

The DNC has made progress over the past year — some concede it had nowhere to go but up — and it has strengthened its fundraising and organizing operations, and notched election wins from Alabama to Virginia. Boosters say that the DNC’s leadership has done the hard work of earning back Democrats’ trust and bridging the lingering divides between the Hillary Clinton and Bernie Sanders wings of the party, setting Democrats up for success in what could be a historically important 2018 midterm election.

Yet, sensational stories keep hitting the Beltway press: earlier this month, a juicy Politico article reported that Perez and Ellison still periodically get in explosive fights, and that the Sanders faction continues to fight with the establishment over a series of intraparty flashpoints.

By all indications, Democrats have momentum, and a real chance to take back control of Congress this November, along with governorships and state houses across the country. The DNC is poised to play a central role in that — if it can get out of its own way.

A deficit of trust

Politico’s story on the state of the DNC reported that the relationship between Perez and Ellison “remains chilly, with periodic explosive fights over party strategy and appointments.”

That anecdote, which Ellison told MinnPost was “inaccurate,” comes on the heels of a year of press detailing an uneasy and often contentious relationship between the two factions of the party these two men were supposed to bridge: Sanders-aligned progressives, and Democrats aligned with establishment figures like Clinton, Obama, and former vice president Joe Biden.

The tensions started from the get-go: after the 2016 election, Ellison quickly announced his bid to chair the DNC, and became the early front-runner. But the Democratic establishment — including, reportedly, the former president — was not satisfied with Ellison, and persuaded Perez to jump in the race.

When Democrats met in February 2017 to choose their new party chair, Perez edged Ellison on the second ballot. Afterward, the new chair quickly moved to name the Minneapolis congressman as his deputy chair, a position that had not existed before in the party’s hierarchy.

It was meant as a sign of unity that Perez, seen as an avatar for the party establishment, and Ellison, an early prominent backer of Sanders, made nice — and it was meant to be a message to the party rank-and-file that it was time to move past the divisive 2016 primary.

Democrats, after all, had an awful lot to do: after Clinton’s humiliating loss to Trump, Democrats were shut out of all branches of government for the first time since 2006, left to sort through the rubble and rot at the DNC, which came out of the 2016 election cycle battered and beleaguered.

Under Obama, who operated Organizing for America, his own grassroots campaign apparatus, the DNC was neglected — a neglect compounded by what many saw as the mismanagement of U.S. Rep. Debbie Wasserman Schultz, who chaired the party from 2011 until she resigned amid scandal ahead of the 2016 Democratic convention. 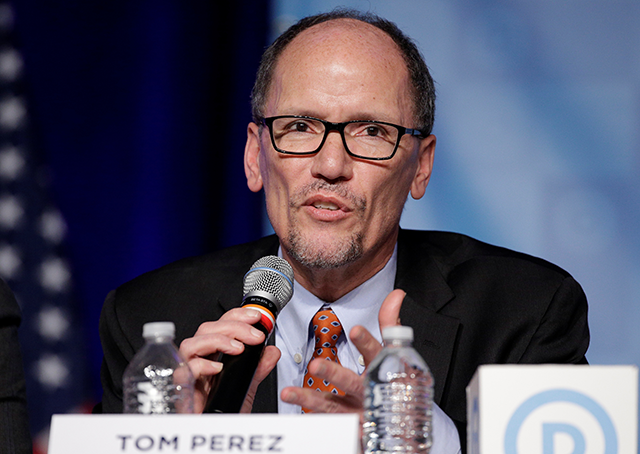 On top of all that, the committee had just sustained an embarrassing cyber-hack during the 2016 cycle that aired the party’s dirty laundry from a contentious primary, and confirmed for many that the process was rigged against Sanders.

Faced with the task of digging out the DNC from a deep deficit of funds, organizational capacity, and trust, Perez and Ellison formed a so-called Unity and Reform Commission to recommend changes to the way the party organization works. They re-invested in fundraising, staffing, and getting back to the committee’s basics — supporting grassroots organizing, state party committees, and other Democratic-aligned groups.

At the same time, Perez made decisions as chair that deeply upset the party’s progressive wing. When the DNC met for the first time under new leadership last October, committee members found that Sanders and Ellison backers were removed from key posts — and replaced by Clinton loyalists.

Several prominent supporters of Ellison’s bid for chair, like Ray Buckley, the former chair of the New Hampshire Democratic Party, were pushed off the DNC’s executive committee, for example, prompting critics to call it a “purge” of Sanders progressives.

‘Rolling down the path toward victory’

To hear people like Ellison tell it, however, the DNC has made significant progress from where it was a year ago. He claims the DNC is heading in exactly the right direction as the party gears up for the 2018 midterms.

“Things are going well over there,” Ellison told MinnPost on a January day in the Capitol. “Tom and I are working together cooperatively.” Directly addressing the Politico story, Ellison said “Tom and I have a great working relationship. I admire him. That’s it.”

Ellison noted his travel for the DNC, which had taken him to Connecticut, northeastern Pennsylvania, and Florida just in the last week, and talked up the success of his so-called Resistance Summer initiative last year, which he said led to Democrats knocking on over one million doors across the country.

Acknowledging the internal strife, Ellison likened it to a family squabble. “To say things are going well is not to say there are never any points of controversial debate,” he said. “We’re like a raucous family that basically loves each other, but often has arguments internally. I’m not saying that the people that are raising concerns that sound like controversies are without merit.”

On the ground in Minnesota, Democratic operatives and activists offered different assessments of the situation at the DNC: some believe the organization had made remarkable progress considering the bleak shambles it was in just a year ago, and that it is on its way back to relevancy and prominence.

They say the DNC has turned around its fundraising, and that the organization played roles in supporting candidates in the past year’s elections. Democrats picked up a U.S. Senate seat in Alabama, won governorships in Virginia and New Jersey, and nearly flipped control of the Virginia state house, a coup of a result for Democrats.

Nevertheless, DNC fundraising has continued to lag behind that of its GOP counterpart, despite the anti-Trump energy that has generated tens of millions of dollars for Democratic congressional candidates. As of November, the RNC had roughly five times more cash on hand than the DNC did; at the beginning of that month, the DNC had fired its chief fundraiser.

Some Democrats, many of them supporters of Sanders, have spent the last year seething on social media and commiserating about what they see as a lack of progress in the party. To some DFL campaign operatives, that dissatisfaction about where the party is heading could hamper Democrats’ chances in the midterms.

Michael Rosenow is the campaign manager for Jeff Erdmann, a DFL candidate for U.S. House in the 2nd Congressional District running as a Sanders-style alternative to Angie Craig, the DFL nominee in 2016 who was defeated by GOP Rep. Jason Lewis.

Rosenow says many grassroots Democrats, who believe the DNC rigged the 2016 primary in favor of Clinton, do not trust the national party organization, nor do they trust state and local party groups, either. “We’ve talked to a lot of Democrats in CD2 who are telling Jeff to get out of the race, because it’s rigged and there’s no way he can win,” he told MinnPost. “You talk to people who are longtime caucus-goers who have given up on the party, and don’t like what’s happening nationally, and in our state.”

Rosenow argued that Washington Democrats are too bullish on their chances to take back Congress in November, and are confusing the intense energy that has appeared to counter Trump with energy in favor of Democrats.

“Democrats continue to run the same failed strategy at candidate recruitment and communication,” Rosenow said. “Standing for nothing but platitudes, and hoping the D next to their name gets them across the finish line. The DNC now has to rely on wave elections to win, and that stems from the culture the DNC has propagated. There needs to be systemic and long-lasting change and I don’t see that happening.”

Rosenow and his boss aired some of these concerns in a splashy story in the Intercept detailing how Washington Democratic Party organizations are closing the door on grassroots-minded progressive candidates for U.S. House, such as Erdmann, in favor of establishment-minded candidates who can raise money.

Of anyone in party leadership, Ellison senses this trust gap between Washington and progressive Democrats: after all, he was Sanders’ earliest prominent supporter. And some Democrats still hold that Ellison’s broadly-supported bid for DNC chair was railroaded by the same people who stacked the deck for Clinton in the primary.

The congressman was clear-eyed but diplomatic about the challenges the DNC faces in trying to mend the wounds from 2016. “It’s a growing trust,” Ellison said of the committee’s efforts. “By the way, why should they trust us if we can’t prove to them that we are committed to organizing, that we are transparent, and we are fair to all primary candidates? We have to re-earn that trust.”

He cited the work of the DNC’s Unity Commission, which wrapped up its work at the end of last year. It made a slate of recommendations to reform the way the committee works — notably, to dramatically curb the role of superdelegates, a key priority for the Sanders wing.

Ellison said Democrats can be, by nature, more difficult. “Democrats, as a group of people, tend to be independent thinkers who have their own ideas about the way things should go. One thing I think is true about Republicans is they tend to fall in line easier than we do.”

He doesn’t think that will hurt things in 2018 — and forecasts that Democrats will take back the House, Senate, many state legislatures and governorships on the strength of investing in door-by-door, precinct-by-precinct organizing. “I believe we will,” he said, “because we have a renewed commitment to energizing Americans on the grassroots level.”

Can the DNC get over itself and help get Democrats elected in 2018?