You may have heard there’s a Big Game coming to Minneapolis.

You may have heard a lot of things.

Some of what you’ve heard about the Super Bowl, to be played Feb. 4 at U.S. Bank Stadium, is actually true. (That the Vikings aren’t in it, for instance.) And some of it is guesswork mixed with wishful thinking.

Take economic impact, or the amount of money expected to pour into the area the week of the game. It’s difficult to quantify, though that hasn’t stopped the NFL and Super Bowl host committee from trying.

After Glendale, Ariz. hosted the game three years ago, a study from the Seidman Research Institute and the Arizona State University School of Business claimed a gross economic impact of $719.4 million for the state of Arizona. That was the highest of any Super Bowl held since 1988; most fell between $150 million and $400 million. Here in the Twin Cities, a pre-event estimate commissioned by the Minnesota Super Bowl Host Committee projected a $338.4 million net impact for this year’s game.

Rockport Analytics, which produced the report, presumes 125,400 expected visitors will spend $610 per day. The impact total does not include “displaced tourism,” or money tourists usually spend here now. Even so, economists who examined previous Super Bowls say the impact usually is much less than organizers claim.

In their 2004 paper “Super Bowl or Super(Hyper)Bole?: Assessing The Economic Impact of America’s Premier Sporting Event,” economists Robert Baade and Victor Matheson studied Super Bowls from 1970-2001 and concluded the game contributed about one-quarter to the local economy what boosters promised. With additional research, Baade thinks it’s closer to one-tenth.

“Economists have a rough rule of thumb: Move the decimal point one place to left, and you’re far more likely to come up a better measure of economic impact than the NFL number,” said Baade, a professor of economics at Lake Forest (Ill.) College.

Andrew Zimbalist, an economics professor at Smith College who has written and consulted extensively about sports-related economics, said the Twin Cities could fare better than most because tourism lags here in the winter. Meet Minneapolis, the convention and visitors association, said hotel occupancy around this time usually runs about 55 percent. Occupancy should be significantly higher Feb. 1-4, since about 86 percent of surveyed properties this week reported no availability for those dates, according to a Meet Minneapolis report. There are roughly 43,400 hotel rooms in the Twin Cities metro.

“If everything works out favorably, you’re probably looking at somewhere in the neighborhood of $30 million to $50 million of incremental impact,” Zimbalist said. “That’s in a situation where you’re presuming there’s a great deal of excess hotel capacity during those weeks in February.”

Why are these estimates so far off? Blame the NFL, Baade said. The league promises the Super Bowl to cities that build new stadiums (as was the case here), and the lure of a major cash grab from the country’s most-watched event often convinces cities to pony up while exaggerating the benefit. Even if the $338 million estimate proves more accurate than most, it falls far short of the $498 million taxpayer contribution toward U.S. Bank Stadium’s $1.1 billion price tag.

Zimbalist said estimates often don’t account for residents leaving town to escape logistical hassles, disruption of businesses near the stadium due to closed streets, and security costs. Minneapolis police will be augmented by the National Guard, Homeland Security and police from outside the city, according to Richard Davis, one of the host committee’s three chairpersons.

And daily spending estimates based on hotel occupancy are often wrong. Many hotels require three-to-five night minimum stays. Some wealthy guests, Zimbalist said, book the minimum but fly in only for the Saturday night parties and the game. Empty rooms tend to spend less money.

“You put all those things together, and you can’t anticipate a priori [derived by reason alone] that there’s going to be a positive impact,” Zimbalist said. 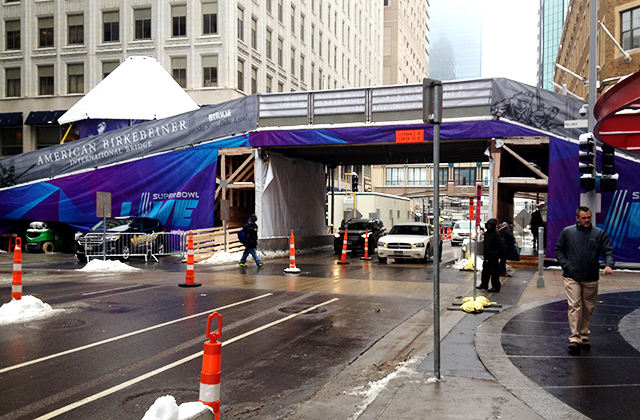 Already, downtown workers are presuming the worst. Super Bowl Live, a free fan festival, takes over Nicollet Mall this week. Eighth Street is blocked off for a concert stage, and Ninth Street drops from three lanes to two at Nicollet Mall to accommodate the American Birkebeiner International Bridge, a skiing overpass trucked in from Hayward, Wis.

Davis, the US Bancorp executive chairman, said his company offered downtown employees the option of telecommuting or working from a satellite location next week instead of their Nicollet Mall skyscraper. Other downtown businesses are taking similar precautions, especially near the security perimeter around U.S. Bank Stadium.

Hennepin Health closed its walk-in service center in the Grain Exchange Building last week and this week because of traffic and parking concerns, rerouting clients to two other locations. Hennepin County District Court at Government Center will hold only emergency hearings next week.  North Central University, about 10 blocks from the stadium, cancelled classes through Feb. 5 because MPD is using its campus and nearby Elliott Park as a security staging area.

New England Patriots and Philadelphia Eagles fans seeking hotel rooms downtown this week were largely out of luck, and properties on the outskirts of town asked exorbitant rates. As of last Wednesday, the Marriott Courtyard Bloomington near the Mall of America offered rooms with a king bed for $699 a night, or $2,995.22 for a four-night stay, prepaid, per marriott.com. The same room, a week later, goes for $89 to $161 per night.

To gauge the true economic impact, Baade recommends waiting a year or more, “We found the only way you can really assess what the impact is, is to do an audit,” he said. “There’s no way to do that before the fact.”