For now, at least.

During two official events at Minneapolis City Hall Monday — the public swearing-in of Frey and the council and the council’s organizational meeting — unity and collaboration dominated the word cloud. Perhaps it was typical first-day-of-school optimism. But after a contentious 2017 election, and after four years of a city council divided on key issues, getting along also has become politically desirable.

It helps that on many issues you’d need dental floss to find the ideological separation between most of the city elected officials. And this version of the council is likely to be even more progressive than the last one, after two members who sometimes voted no on the most-contentious issues were defeated in November.

Yet the new council president Lisa Bender did not support the new mayor in November, and the two were in dueling factions on some emotional budget fights. So when Frey pledges to work with the council — even literally giving them the keys to his office — and when Bender tells Frey she thinks the council will work with him closely on key issues, it is worth paying attention.

“We’re going to be a great team,” Bender said to Frey, who had taken a seat on the council dais, and cited his support for affordable housing, improving police-community relations and economic inclusion: “You will have my full support is passing the policies and budget investments needed to achieve these goals.”

Frey also pledged comity when he addressed the council at the end of its Monday meeting. “I want to work with you extensively and I am 100 percent positive that we can get some wonderful things done,” Frey said. “I have the utmost faith in this new government to work together, to collaborate for the community.”

Frey and the 13 council members were actually sworn-in a week ago during private ceremonies, so all have officially been on the job for a week. Monday’s packed event at City Hall was ceremonial, with music, poems and invocations by Native American, Hmong and Somali religious leaders.

In his speech, Frey stuck to the unity theme. “That’s what today is about,” he said. “Coming together, uniting around a shared vision, and charting a course that quite simply improves people’s lives. If we work together, Minneapolis can be a city where every ward and every neighborhood is defined by opportunity.” 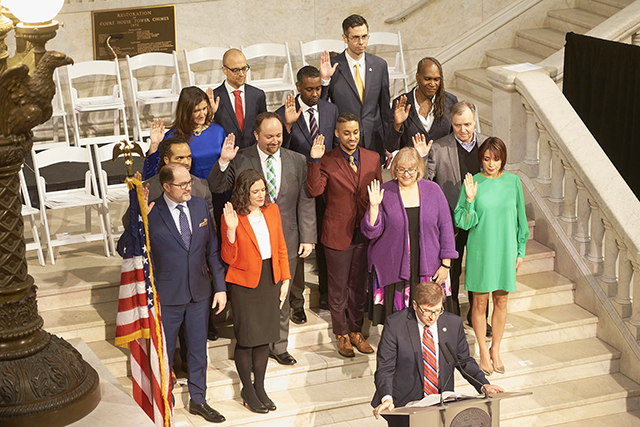 MinnPost photo by Tony Nelson
Members of the Minneapolis City Council taking the oath of office on Monday.

After noting the presence of 17 Fortune 500 companies in the state, Frey said it has been a long time since any such company had formed. “And there’s a clear reason for that,” he said. “Our population is becoming more diverse — communities of color are growing — but we’re not knocking down the barriers to their ability to scale. This is not a symptom of our deficiencies. It is the reason why our deficiencies persist.

“We talk about access, but we know that as a region we are excluding professionals of color and failing to utilize minority-owned businesses.”

But he also said affordable housing needs to be built across the city as a way of undoing what called the city’s “history of intentional segregation.”

“We have maps in city hall identifying North Minneapolis as a ‘slum’ occupied by our black and Jewish communities,” he said. “It’s that kind of intentional segregation that divides communities and ideas. It is that kind of intentional segregation that restrains our economic growth, prevents inclusion and hinders the exchange of ideas necessary for our modern day success stories.

“We didn’t get here by accident. So we can’t expect to address these problems without solutions that match the precision of the harm inflicted.”

Frey noted the city’s history of prejudice, which earned it the reputation as the nation’s capital of anti-Semitism prior to World War II. “Today a Jewish man is delivering this speech as your mayor,” Frey said. “Not long ago, I would have been redlined out and denied employment in many places.”

On police-community relations, Frey said he had “high goals” for improving them. “Events of the past several years have tested our city in ways that are new to some neighborhoods but are all too familiar to others,” Frey said. “As your mayor, I will make damn sure that I do everything in my power to help heal that pain and strengthen police-community relations not just through conversations but by working with you and our law enforcement agencies to enact policies that protect and serve the people our city.” 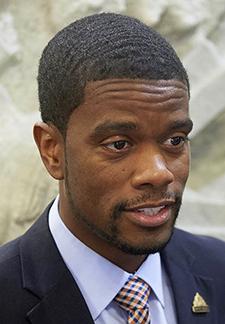 He also extended the collaboration mantra to neighboring St. Paul, even interrupting his speech Monday to lead a chorus of Happy Birthday to fellow newbie Mayor Melvin Carter, who was in attendance. “So as you heard, when we sing, we sing together,” Frey said after. “When we succeed, we succeed together. And when things get tough, we will stay at the table. We are in this together.”

Lots of unity from council, too

The unity theme carried over to the organization of the council. In putting together the votes to become the council’s president, Lisa Bender said she asked each council member what they wanted from council leadership. “You said loud and clear that you want this body of elected leaders to be unified,” she said. “And you have my commitment to do everything I can to keep us moving forward toward our shared goals.”

Unity doesn’t mean agreement on all issues, she said. But the pre-arranged selection of her as president and Andrea Jenkins as council vice president avoided the public battle of four years ago that split the council into two camps that carried over the full term.

“We were talking about the fact that Minneapolis is a source of hope right now,” Bender said after the meeting, meaning that things can still get accomplished in large cities that are either blocked or reversed at the federal and state level.

“In order for us to fulfill that promise, I really feel strongly that we needed to come into this term united as a body and not divided over who is chairing which committee,” she said. “I was happy to set aside roles for people who weren’t supporting me in this particular role, that reflected their experience and the needs of their wards, the work they’d done last term and what they were interested in doing this term.”

“We have an opportunity to not have teams,” Bender said, in reference to the factions that sometimes existed last term, which were nominally led by Council President Barbara Johnson and Council Vice President Elizabeth Glidden, who four years ago had competed against one another for the president position. “I think we have broken through some of the divides of the last term.”

Bender said there was a rival for the top job: a ticket of Jenkins as president and Council Member Linea Palmisano as vice president. Bender said she had the votes to defeat them and could have given the key committee posts only to those who were supporting her, but chose instead to use those assignments to link the council together. 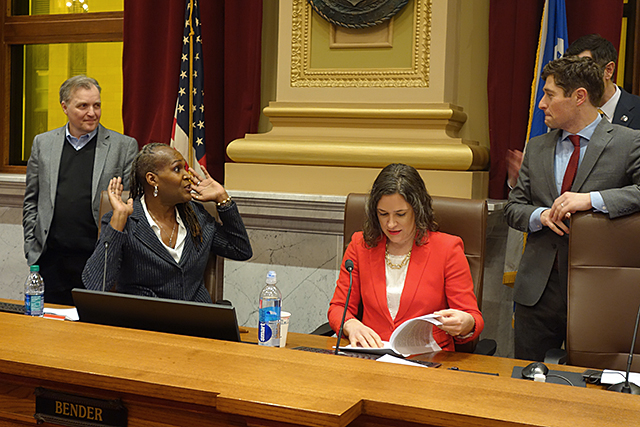 Jenkins made some city history by becoming the first transgender person of color in the No. 2 post. In that position, she will chair the council’s Committee of the Whole, which contains all 13 members and reviews the council agenda and hears issues beyond the scope of the other committees. Jenkins, who has experience working as an aide to two previous council members, will also chair a new Race Equity Subcommittee of the Committee of the Whole.

Bender had chaired the Zoning and Planning Committee, but that assignment now goes to new council member Jeremy Schroeder. Kevin Reich maintains the chair of Transportation and Public Works.

Jeremiah Ellison, one of five new members — along with Cunningham, Schroeder, Jenkins and Steve Fletcher — will be chair of the Elections & Rules Committee. Council Member Andrew Johnson was elected as council majority leader and will chair the Intergovernmental Relations Committee.

Fletcher will be vice chair of Budget, Public Safety and Ways and Means.