Donald Trump came into the White House a year ago promising to get tough on the foreign countries supposedly killing the U.S. on trade — especially China.

So, when his administration announced this week that it would be slapping new tariffs on imported parts of solar panels and washing machines — the vast majority of which are manufactured and imported cheaply from China — the move seemed like a logical step for this president and his team.

To hear the White House tell it, a foreign industry was undercutting U.S. industry, forcing them to take retaliatory action to protect U.S. jobs. Cut and dried, right?

Not really: for one of the products included on this tariff, components of solar panels, the calculus is not so clear. The U.S. solar energy industry has boomed in recent years, and the vast majority of its job growth hasn’t come from making the panels, but installing them on roofs and in “solar gardens” across the country.

By making the cost of solar panels more expensive, advocates say, the tariff could discourage new customers, slowing the industry’s rapid growth while doing little to actually help the companies that make the panels in the U.S.

In Minnesota — where solar energy has grown many times faster than other sectors of the economy — the industry and its backers are concerned that this move from Washington will cast a shadow on a form of clean energy that has been thriving in the North Star State, raising questions about what the Trump administration’s energy and trade priorities really are.

The Trump administration’s political views on trade aside, its protectionist move on behalf of U.S. solar panel manufacturers did not come as a major surprise: it comes on the heels of several cases litigated in the last year before the International Trade Court, which found that “U.S. producers had been seriously injured by imports,” according to Robert Lighthizer, the U.S. trade representative and the administration’s lead negotiator on trade issues.

The U.S. has experienced a boom in solar energy over the last decade, which has been made possible by various factors that have lowered the cost of producing solar energy. But an important one has been the availability of cheap solar panels manufactured overseas.

According to the Solar Energy Industries Association, a national trade group, the industry has experienced an average of 68 percent growth every year: in 2010, the energy capacity of all new solar panels installed in the U.S. that year was barely 1,000 megawatts, enough energy to power about 800,000 homes. The total of capacity new solar panels installed in 2016 was 14,000 megawatts — enough to power over 11 million homes.

Employment in the solar sector has skyrocketed as the cost of accessing solar power has decreased, and solar panels are being put up all over the country: currently, 260,000 jobs in the U.S. are in the solar energy sector, and industry advocates estimate that barely a percent of those jobs are tied to making the components of the panels themselves, while the majority are tied to installing solar panels.

Despite the relatively small size of the U.S. solar panel manufacturing sector, the Trump administration announced on Monday that imported components of solar panels would be subject to a four-year tariff, which starts at 30 percent in the first year and gradually decreases to 15 percent by the fourth.

The bulk of the benefit would go to two U.S. companies that have claimed the most injury from cheap imports in trade court litigation: Oregon-based Solar-World, and Georgia-based Suniva. Though they make solar panels here, those companies are essentially owned by German and Chinese entities, respectively; one had already filed for bankruptcy, and the other had laid off the vast majority of its workforce. 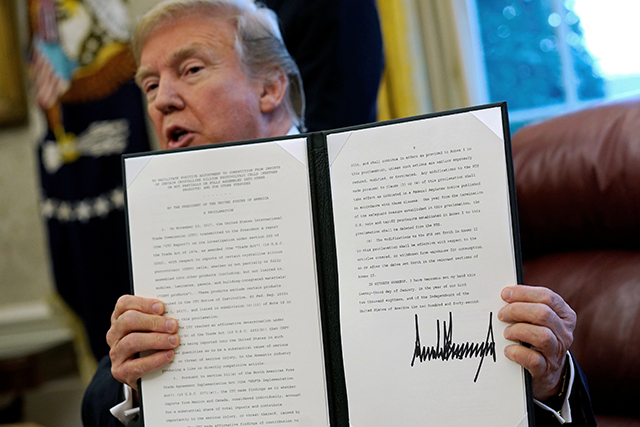 The Trump administration defended its move as one that will spur the domestic manufacturing sector, and while those companies were certainly pleased with the move, solar advocates elsewhere were left scratching their heads.

Varun Sivaram, a clean energy expert writing on Columbia University’s energy policy blog, observed that the Obama administration placed tariffs on solar imports from China in 2012, after concluding that the Chinese government had illegally subsidized that industry — and that move did little to restore any U.S. competitive advantage.

“It is possible that had tariffs been put in place a decade ago they might have helped level the playing field and even deter illegal Chinese state subsidies,” Sivaram says. “But if Obama’s tariffs closed the barn door after the horse bolted, then Trump’s new tariffs amount to putting a lock on the door.”

Nationally, the SEIA estimates that the tariff could lead to the loss of 23,000 solar jobs. It could also slow the growth of the industry by 11 percent.

A shadow over Minnesota

Minnesota may not get as many days of sunshine as solar hotbeds in the West and Southwest U.S., but that hasn’t stopped the industry from heating up in the North Star State. Minnesota is considered a leader among states in terms of clean energy policy — largely thanks to a state-mandated standard for renewable sources of electricity — and beyond that, the state has taken steps to spur growth and innovation in the solar sector, specifically.

In Minnesota, then, news of the Trump administration’s tariff on solar panel components was received as a setback to an industry that has experienced major growth and is poised for even more expansion.

Gregg Mast, executive director for Clean Energy Economy Minnesota, a clean energy industry umbrella group, said the move from the administration “dims prospects for a market that is one of the fastest-growing sectors of the state’s economy… The tariff injects uncertainty for projects and associated jobs that help fuel our economic growth, effectively limiting choice for consumers, who are increasingly demanding clean, resilient, and cost-effective energy options.”

According to Mast, the growth in the solar market in Minnesota has been dramatic in recent years: in 2015, the state produced just 35 megawatts; last year, it produced over 700 megawatts, enough to power 90,000 homes. Since 2012, the solar industry in Minnesota has grown by 4,000 percent.

The growth rate in solar has far outpaced that in sectors of Minnesota’s economy — as much as 10 times more. That has meant an increase in solar jobs: in 2016, Minnesota had about 2,870 jobs in solar, according to the Solar Foundation, a pro-solar nonprofit; about 10 percent of those jobs are in manufacturing. (According to Minnesota government employment statistics, solar jobs account for more than a third of the number of mining and logging jobs in the state — a sector that gets far more political and media attention.)

The Trump tariff, whose rates are not considered especially tough, would still raise the price of a solar installation, which could spur prospective customers to hold off on getting that solar panel installed.

Gabe Chan, an energy policy professor at the University of Minnesota, forecasted that “we will see a slowdown in one of the most exciting pieces of the solar story in the country.” That’s in part due to a unique feature of the solar economy in Minnesota — the state’s so-called community solar garden program.

Instituted in 2013, the community solar program allows power customers to “subscribe” to solar grids without installing panels themselves, letting them access savings on their utility bills.

The solar program “has seen a number of really dramatic ups and downs since its inception,” Chan explains, and it had been working on thin margins even after Xcel Energy worked out a new plan in 2017 with community solar providers to reimburse subscribers with savings.

If you already have a solar panel, Chan says, rest easy — the tariff is unlikely to affect you much. “What’s going to be the main implication is there’s going to be less community solar. That program is working on such fine margins, and the tariff applies to panels that would have gone to community and rooftop solar… It will now become more expensive for them to build solar projects,” he says.

The solar industry is in a decent position to weather the effects of the tariff as it kicks in, says Eric Pasi, chief development officer at IPS Solar, a Roseville-based solar power provider that bills itself as one of the fastest-growing solar companies in the U.S.

The industry has already been adapting, as companies spent the last year wondering about a potential tariff, and “the ambiguity really hampered our development and construction schedules,” Pasi said.

In that sense, Pasi was somewhat relieved that the tariff finally came down. “I think this is more of a speed bump than a car wreck,” he said. “2017 and 2018 were set for record-breaking growth… Consumers and businesses and municipalities are going to hear there’s a 30 percent tax and think now is definitely not a good time to move forward with a project. I think it’s the opposite — now is a really good time to consider solar.”

“The market has been preparing for this for the last six to eight months,” Pasi explained.

Even if the tariff’s effects are not doom-and-gloom, policymakers and experts are wondering why the Trump administration would make a move that benefits a handful of companies while throwing down — in the best-case scenario — a speed bump for the vast majority of the industry.

Minnesota’s U.S. Senators, Amy Klobuchar and Tina Smith, both raised concerns to MinnPost about Trump’s move, saying it could harm upstart solar manufacturers in Minnesota that rely on imported components from Canada, a country that is not exempted from the tariff.

Trump’s decision “could disrupt a vital supply chain for a Minnesota solar panel manufacturer and threaten the development of new clean energy manufacturing jobs in Mountain Iron,” Smith said, referencing a facility in that town run by Heliene, Inc., a Canadian company that has received millions in state loans to expand solar module manufacturing on the Iron Range.

Klobuchar said it was important to even the playing field for U.S. solar manufacturers, that interest has to be balanced with “maintaining jobs in the U.S. from parent companies based in other countries like Canada.”

Ultimately, experts like Chan say they don’t know who wins with Trump’s decision. He added that the U.S. should be investing in developing manufacturing capacity for a more high-tech type of solar panel, instead of getting into a hopeless competition with China over a product that country dominates. “The U.S. is going to have no chance against China,” he adds. “It’s kind of bizarre.”

The Trump administration’s protectionist leanings on trade are well-known, as are its favorable views on the fossil fuels and coal industries. But don’t suspect that backers of those industries in the White House are behind this move — many oil companies have investments in solar, and a big group of conservative-aligned groups has panned the tariff in the past week.

“I don’t think the coal industry wins,” he says. “They’re fighting natural gas, not renewables. It’s a weird thing. I don’t know who’s celebrating this tariff within the energy sector. If there was a winner here, it’s ideology.”

To clean energy boosters like CEEM’s Mast, it’s a puzzling outcome. “The market momentum is clearly moving in favor of cleaner and more sustainable energy,” he said. “Why would we want to stop that momentum?”

What are Joe Biden’s views on two of the most controversial environmental projects in Minnesota?