If you head over to 2117 West River Road N. in Minneapolis at the appointed hour, you are welcome to attend a regular meeting of the Minneapolis Parks and Recreation Board. But first you’ll have to walk over scorched earth.

The park board, heretofore known for its adorable Grand Rounds Scenic Byways and Luminary Loppets, got torched with upheaval in last year’s elections. This shouldn’t have been a surprise. Change had been in the air since September 2016, when activists accused commissioners of discriminatory policies during a heated board meeting. Ten people were ejected, four were arrested, and retribution was promised.

In November, with the election of six new commissioners — many of whom were endorsed by Our Revolution, an organization affiliated with the Bernie Sanders for president campaign — that comeuppance was seemingly delivered. The next month, Park Superintendent Jayne Miller, who for seven years had been hailed as a national star, resigned.

That’s a lot of drama for a historically sleepy bureaucracy, and it raises a couple of obvious questions, such as: Will all this turnover result in invigorated and competent policymaking? Or just more shouting? The Minneapolis Park and Recreation Board manages 160 parks, 558 employees and a $111 million budget, after all. It might be helpful if they can stand each other.

Three priorities were on the tips of tongues as commissioners took office at a ceremony on January 2: finding a replacement for Miller, addressing equity, and upgrading facilities.

Replacing Miller won’t be easy. As much as she came under fire, she was a seasoned executive with deep subject-matter expertise who was key to developing the 20-Year Neighborhood Park Plan, an agreement with the city to provide an additional $11 million yearly for parks through 2036.

Commissioner Meg Forney, who has been on the board since 2014 and has been active in the system for 40 years, was a fan. She considered Miller an exceptional leader who got run out of town unfairly. “Jayne brought so many skills to the board and built up the parks system to where we kept winning best-in-the-nation awards,” said Forney. “It’s a shame she’s no longer with us.”

Not every commissioner feels the same, however — about Miller or about the park system’s national pedigree. “When I went door-knocking in north Minneapolis, people would question being the number one system in the country,” says Kale Severson, a 34-year-old first-termer representing the Second District in North Minneapolis. “Maybe in south Minneapolis, but not over here.”

Forney, who was not among the Our Revolution slate of candidates this fall, understands the concern. “I live in southwest Minneapolis, which is rich in amenities, but I know that isn’t felt equally throughout the city.”

But Forney also takes issue with the notion that equity hasn’t been properly considered up to now. “I find that notion frustrating. The last board addressed equity more than any other level of government,” she said. “The 20-year plan that passed in 2016 was based on racial equity. It was data-driven. We used a process that hadn’t been used anywhere else in the nation. To say we have been faulting on equity is contrary to the actions.”

Whether the city is faced with a perception problem or a policy problem is open to debate. Severson makes this point regarding hiring practices. “In north Minneapolis, we have a high Hmong population,” he said. “But we still don’t have a full-time Hmong staff member in recreation in the community. We have an opportunity to help guide young people if we can show them leaders who look like them, and not just maintenance staff.”

This all makes finding the right fit in the next superintendent crucial. The next leader will have a vastly different job description than the one Miller inherited in 2010. Back then, achieving racial equity to the satisfaction of the entire community wasn’t what everyone talked about. 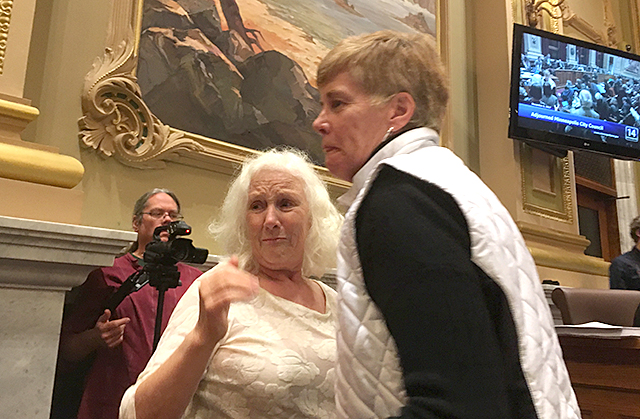 Forney, for one, advises taking a cautious approach to the search. “I think the best thing we can do is take it slowly,” she said. “It can take six to 10 months to find a replacement. When you have a board that has never been in government and is being asked to immediately do the number one thing a commissioner is supposed to do, that’s asking a lot. I don’t want us to jump to any quick conclusions.”

Neither does Severson. He agrees with Forney that the superintendent hire takes precedence. “It skyrocketed to the list of priorities when Miller resigned,” he says, noting that he supports the idea of an interim hire. The board approved a resolution January 3rd to allow staff to negotiate with former superintendent Mary Merrill Anderson to take over until a permanent hire is made.

‘We’re going to do great things’

Yet Severson doesn’t want the superintendent search to be the only thing the board discusses in early 2018. Youth violence, for one, should also be on the table. “It is a big issue in north Minneapolis,” he said. “I understand it’s uncomfortable but we need to talk about it. Is the solution more staffing in the parks? Perhaps. Is it more specialized programming for young people in our communities? Absolutely.”

One area where the new board is likely to find common ground is in upgrading facilities. “The majority of the recreation centers were put up in in the 1960s and 1970s,” Forney said. “They were cookie cutters. Back then, the city was mostly white. It’s different now. How can we build a recreation system that is going to evolve? What does the community want in facilities now? Those are the questions we need to ask.”

Severson agrees, but would also like to see the facilities get some ecological adjustments. “If you look at our buildings, the majority have flat roofs and south-facing views. We should put solar panels on roofs and install geo-thermal heating and cooling. We can do these things. It costs money and isn’t cheap but it will pay for itself in four or five years,” he says.

Where does the Minneapolis park board go from here?