Can an elected official in Minnesota serve in two positions at once?

That was the central question before Ramsey County District Judge John Guthmann on Tuesday morning, as the latest political dustup at the Capitol spilled into his courtroom for the second time in recent months. At issue is the decision of Michelle Fischbach to serve in the state Senate, where she’s the Senate president, as well as lieutenant governor of the state of Minnesota.

Fischbach’s ascension to the lieutenant governor’s office happened automatically in January, after DFL Gov. Mark Dayton appointed former Lt. Gov. Tina Smith to the U.S. Senate. Smith replaced former U.S. Sen. Al Franken, who resigned suddenly in the midst of sexual harassment allegations. The Minnesota Constitution requires the president of the Senate to take over if there’s a vacancy in the lieutenant governor’s office, but the Senate’s counsel argued a 120-year-old Minnesota Supreme Court decision makes it possible for Fischbach to serve as a senator and lieutenant governor at once.

The move has sparked a string of questions — both legal and political — that could have ramifications far beyond this single case. Pending the results of a special election held on Feb. 12, the Senate could have a one-vote majority, 34-33, in favor of the Republicans. But Democrats, who filed the lawsuit in Ramsey County Court, argue that Fischbach cannot serve as a senator and lieutenant governor at the same time and must immediately resign her senate seat. If they succeed, the result could be a 33-33 tie in the chamber, at least temporarily, and trigger a heated special election for her seat.

Adding pressure to the situation is the fact that the 2018 legislative session convenes on Feb. 20, just two weeks away.

Democrats brought the case on behalf of Destiny Dusosky, a resident in Fischbach’s Senate District 13, which includes Benton and Stearns counties.The case argues Dusosky has a right to representation under the Constitution, but she isn’t being represented with Fischbach, who must serve only as lieutenant governor.

“The constituents always have standing and have some role regarding their representatives in a representative democracy,” Dusosky’s attorney, Charlie Nauen, said Tuesday. “She is not currently represented by a senator.” 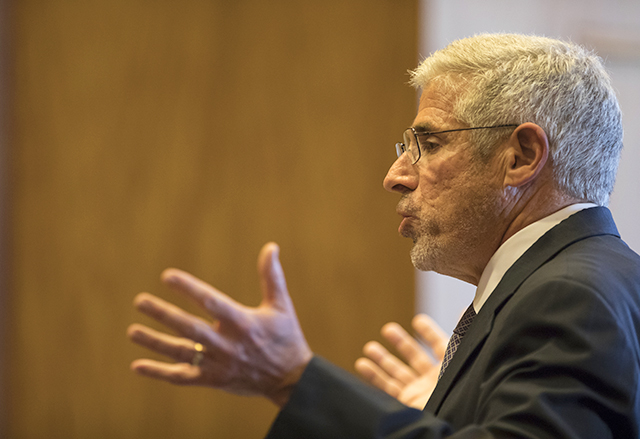 “For 155 years the status quo is that the president of the Senate, who is listed by the Constitution to fill in as lieutenant governor, may continue to serve in the Senate,” he said. “Seven of 9 senators so elevated chose to keep their dual roles.”

The case provided the most contentious part in the hour-long hearing. “What authority do I have to overrule a Minnesota Supreme Court decision?” Guthmann asked Nauen.

Nauen argued that ruling became moot after a 1972 amendment to the Constitution that removed most of the legislative duties of the lieutenant governor, who previously had presided over the chamber on a regular basis.

“Times have changed,” he said.

Guthmann then posed that question Magnuson: “Isn’t that a sea change?” 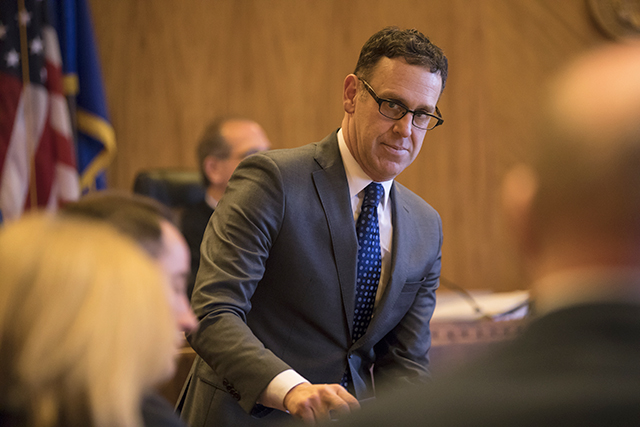 Pool/Renee Jones Schneider/Star Tribune
Kevin Magnuson: “For 155 years the status quo is that the president of the Senate, who is listed by the Constitution to fill in as lieutenant governor, may continue to serve in the Senate.”

At one point in the hearing, Guthmann pondered out loud what exactly is the role of the Minnesota’s lieutenant governor, especially if they don’t preside over the Senate and if attorneys can argue someone can do both jobs at once. Magnuson could only come up with one true role: To serve in place of the governor if they can’t fulfil their duties.

“They are to inquire daily as to the health of the governor,” Magnuson said.

Guthmann laughed: “That’ll make you look forward to getting up in the morning.”

Should the courts step in?

Guthmann also posed plenty of questions about the role of the third branch of government — the courts — in settling this political dispute.

It’s not exactly an unfamiliar issue for Guthmann. Last summer, he presided over a case brought by the Republican-controlled Legislature after Gov. Mark Dayton vetoed funding for the House and Senate. He ruled that Dayton violated the Constitution and separation of powers when he eliminated funding for a separate branch of government, but he also argued that the court should have a more limited role in intervening in political disputes (that ruling was ultimately overturned by the Minnesota Supreme Court).

Guthmann grilled both sides on whether the courts had any place at all in this dispute. In particular, he expressed concern that previous court precedent found only the Legislature has the authority to rule on whether a member of its either chamber is eligible to serve or not. 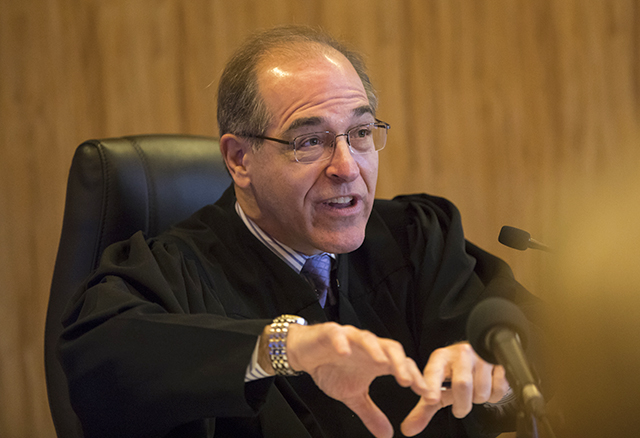 Pool/Renee Jones Schneider/Star Tribune
Ramsey County District Judge John Guthmann posed plenty of questions about the role of the third branch of government — the courts — in settling this political dispute.

Magnuson said Guthmann should dismiss the case on that grounds, and brought up the court case over legislative funding this summer. “The court held in that case that the courts need to not interfere with the political process if there is a political process that can resolve the issue,” he said.

“When is it appropriate for the court to get involved?” Guthmann asked.

“I don’t think you can order them to not seat senator Fischbach,” Magnuson replied.

Nauen said the court is supposed to step in when there are questions about violations to the Constitution, which Fischbach is doing by serving in both jobs at once. “The court makes decides constitutional issues,” he said. “Those are questions of the law.”

Fight over Minnesota lieutenant governor has its day to court