Caty Royce’s first reaction when she heard about the required “small area plan” for her Frogtown neighborhood was an exasperated sigh.

“Why do some stupid document for the city?” Royce, who heads the Frogtown Neighborhood Association, (FNA) asked me. “Traditional small area plans, or task force reports, or any kind of typical run at describing community issues never really have the right feel. They’re not really looking at the issues that people are talking about.”

“The universe delivered a gift to us,” Royce explained. “We had been going after funding for the Victoria Theater project on University Avenue for four years. We were deep into the CIB process trying to get dollars, and we succeeded as the top vote getter. Then the mayor decided to steal the money, and reallocate it to the new cop shop.”

For the record, St. Paul’s “CIB process” is a complex affair where different projects compete against each other. A large appointed committee ranks projects, and put Frogtown’s theater at the top, but then the mayor comes up with a separate list according to different priorities. In this case, the mayor’s priority was a police training facility on Railroad Island.

Folks in Frogtown like Royce and artist Seitu Jones were upset by the loss of the money, and a few days later Jones grilled then-Mayor Chris Coleman about it. When Jones nudged a local artist to illustrate the conversation, it planted the artistic seed for what was to come. 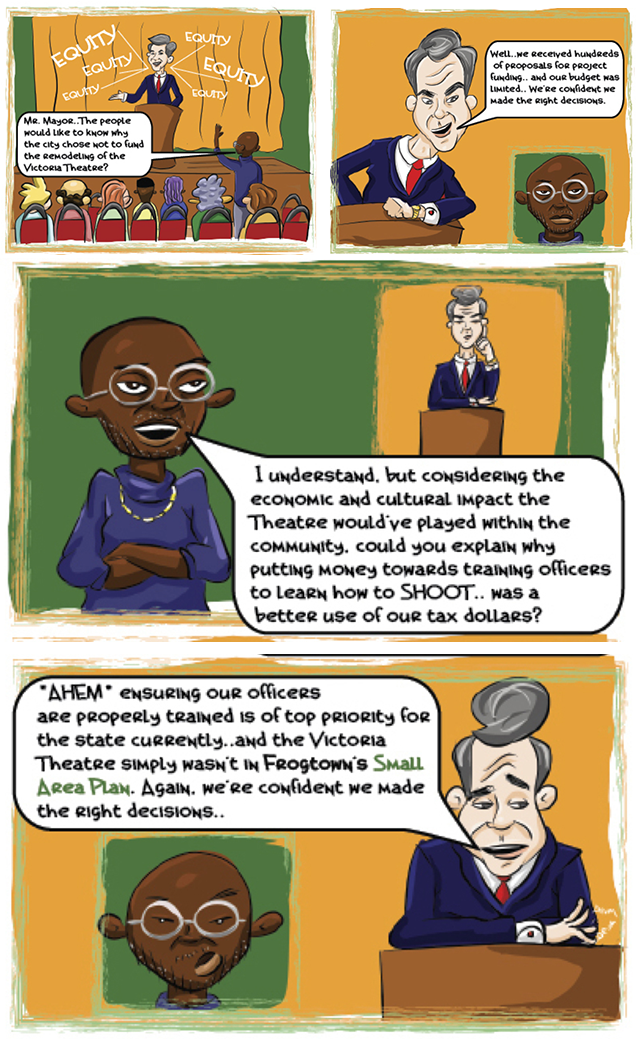 Most of the time, a neighborhood’s “small area plan” is as boring as it gets in the world of urban planning. They are typically written by a small committee, are full of vague niceties about things like sustainability, green space, or affordable housing, and they get approved with only minimal comments from the public. (As a St. Paul planning commissioner, I have witnessed this process firsthand more than once.) Despite good intentions, very rarely do small area plans make much difference in city decisionmaking.

That’s what makes the Frogtown plan so revolutionary. By transforming the format, the FNA might make their small area plan, dubbed “SmaPl,” into a social catalyst.

The key was giving the local artist, Mychal Batson, carte blanche to come up with the format. Luckily the group had received a Met Council community engagement grant, and decided to put the money toward the SmaPl project.

“I’ve always been interested in urban planning and urban design, well before I got involved with FNA,” Batson, who often goes by “Daz,” told me. “I’d been learning how cities are made, because I’m sustainability buff and know there’s a lot of stuff we do wrong or that we do right.”

In working through the plan, Batson kept tweaking the format, in search of something that would actually engage with his Frogtown neighbors. Eventually, he threw out all the dry planning text, and went “all-in” with cartoons based on real people from the neighborhood.

“Initially it wasn’t supposed to be a graphic novel,” Batson said. “It was more magazine-esque, word based, and pictures were secondary. Testing it out on peers of mine, they weren’t much interested in urban design or planning or city processes or any of those languages. So I just went straight graphic novel, and it was the most accessible to a wide variety of people, and the most user friendly to be used as an educational tool. Our generation doesn’t read like we used to.”

In another small area plan, a statement about housing might look like this, taken from a 2016 plan on Saint Paul’s East Side:

H3.3 Support infill development that respects the character of the neighborhood; for example, new construction on vacant lots in single-family neighborhoods should respect the density and housing characteristics of the surrounding area.

In the Frogtown SmaPl, a similar sentiment is expressed quite differently:

Earl: Frogtown is a wildly diverse community and doggone it, we’d like to keep it that way. In order for an under-resourced community like ours to thrive we need resources. And our best resource is, and always will be, each other, and the cultures, values, and perspectives attached to us. 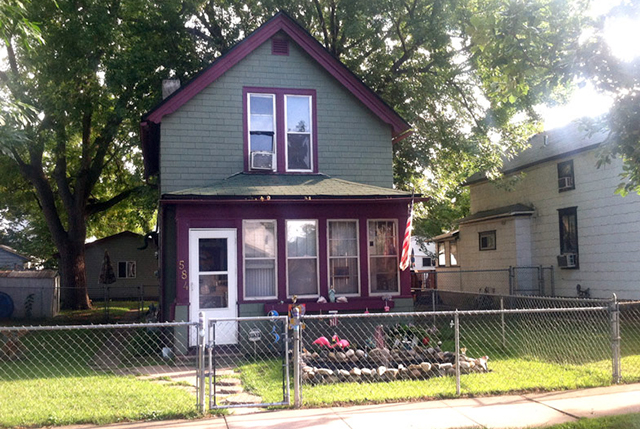 According to Caty Royce, the plan reveals what kind of change can happen if you give power to people closer to those most affected and underserved by city decisions.

“It’s so critical to activate and work with your activist artists,” Royce said. “The brilliant product of SmaPl is what happens when you hand true decision-making power over to local activist artists of color. That is the beauty of the document.”

For both Royce and Batson, one danger of the cartoon format is that people won’t take it seriously. Since newspapers were first printed, cartoons have always had a mixed effect, connecting with a vastly broader audience than print on the one hand, but being easily dismissed by experts on the other. In Frogtown these days, with housing values and development pressure increasing, there is a strong sense of urgency in the air.

“We’re not living through typical times,” Batson said. “We’re up against some major things and I wanted to really put that in people’s faces. A big part of the document that talks about the trends in Frogtown and around the nation talking about climate change, artificial intelligence, and automation. How will those affect how working class communities like Frogtown?”

For Caty Royce, that’s also true. The SmaPl has gotten a lot of positive press about its cartoon format, and they can’t keep up with demand for the document. The FNA is applying for a city grant to print more of the plans, but that might be months away. In the meantime, they’d like to start conversations about plan’s concrete policies.

“There are anti-displacement policies that we need to get resourced for this,” Royce said. “We’re talking about resources, housing coops, and land trusts. There are 35 publically owned lots in Frogtown, and talking about getting control of those. We’re looking for ways to subsidize people’s property taxes and help elders not lose their housing as their taxes go up. That is gentrification.”

The jury is still out on whether Frogtown’s innovative gamble will work out. But at the very least, the SmaPl has already increased engagement and access to knowledge.

A key to democratizing urban power structures is to shift access to information from informed gatekeepers to an often over-burdened public. If only people with the right background or cultural skills feel comfortable speaking at public meetings or lobbying the city, urban decisions become inherently inequitable. But with their vastly more approachable format, Frogtown’s SMAPL could be a huge lever for change.

The Frogtown Neighborhood Association has launched an ambitious plan to democratize planning. Through cartoons