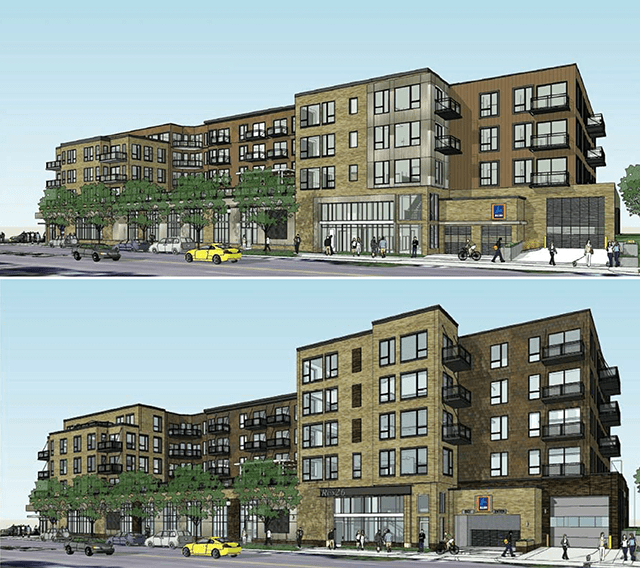 It isn’t very often that the Minneapolis Planning Commission rejects a developer’s request for a variance from the zoning code. It is even more rare that it does so over the recommendation of city planners.

But that’s what happened last month when a request by a Minneapolis-based developer for a mixed use project at 26th and Lyndale Avenue South known as Rex 26 for a variance to increase the height and density of the project was denied — despite the fact that the project is already under construction.

The denial could put the project at some risk, at least financially, and a decision on appeal to the city council has not been announced.

But beyond the particulars, the process provides a glimpse into the complexities of urban infill development and what happens when general planning goals meet neighborhood-level objections — and how a city policy aimed at helping developers present projects for approval can sometimes inadvertently end up working against them.

Not a NIMBY story?

Rex 26 isn’t a story of Nimbys vs. developers. While there were some concerns raised early in the the life of the project, they were eventually lessened by changes to the height, mass and materials proposed by its developers. The fact that the project would include an ALDI grocery store helped too.

It all began in the spring of 2016, when Master Properties managing Partner Don Gerberding brought the project to city planning staff and commission as part of an informal process by which developers meet with staff and commissioners before filing formal application for land use approvals. That process gives developers realistic expectations for dealing with the city, and persuades many to not make applications that are likely to be rejected.

After getting feedback from the city, Master Properties changed its preliminary plan, reducing the number of apartments from 102 to 77 and scaling back the total size of the building from 116,100 square feet to just under 90,000 square feet. Even then, however, Master needed variances from the zoning code.

The height of the building wasn’t as much of an issue as the floor-area-ratio, aka FAR. The city’s zoning rules govern not just building heights but also much square footage is contained within. The FAR, a measure of how much usable space can be built in relation to the total area of the building’s lot, is the tool to accomplish that.

What difference does it make? Design goals for what are zoned as neighborhood commercial districts, such as the one where Rex 26 is located, envision more-intense development on commercial corridors like Lyndale Avenue. But the city also wants to keep new buildings within scale to the existing neighborhood.

A bridge too FAR

Under city code, the allowable FAR for the site of Rex 26 was 1.7. But the code gives developers the chance to win more density, and Master Properties did that by including pedestrian-oriented features, which boosted the project’s allowed floor area ratio to 2.55.

But Master wanted more, and the plans approved by the planning commission in 2016 for the project involved four stories, including a commercial space on street level for ALDI and three levels of apartments, and a variance that would let the FAR go to 2.8.

Then in July of 2017, Master returned to the commission to ask for another variance, this one to allow it to build nine more apartments, taking the project from 77 to 86, by adding an additional floor. By code, though, the project would still technically be four-stories, because the height of the ALDI space had been reduced from 23 feet to 20 feet, which meant it would now count as a single story rather than two. The changes once again increased the FAR, from 2.8 to 3.1.

Then, in December — after construction had begun on Rex 26 — Gerberding returned again to the planning commission. In a letter to planning staff, he wrote that structural changes in the building required by ALDI were costly. As a result, Master Properties wanted an additional 11 rental units on what would be a fifth floor to compensate for the added expense. Without them, the changes required by ALDI would make the project “not feasible.”

The request would increase the FAR once again, this time to 3.4.

During the lastest go-round, Gerberding acknowledged that commissioners might be suffering “appeal fatigue,” though he also argued that the additional story would still keep the building within the height limits permitted in that part of the city. He also called the project a poster child for the complexities of developing a good mixed-use building in an urban area.

As a sweetener for the planning commission, Gerberding offered to pursue funding to set aside 20 percent of the project’s units as affordable housing. The proposal would would mean a family of four with up to $68,000 in income — 80 percent of the area’s median — would be eligible for a unit there; a two-bedroom apartment would cost no more than $1,627.

Planning staff recommended approval of the variance request along with other changes Gerberding sought. “Although the building would exceed the floor area ratio maximum, the applicant has taken measures to reduce the building’s impact by being only six feet taller than the zoning district height allowance and having a u-shaped building which provides building relief along Lyndale Avenue South,” wrote senior city planner Aaron Hanauer in a report on the request. 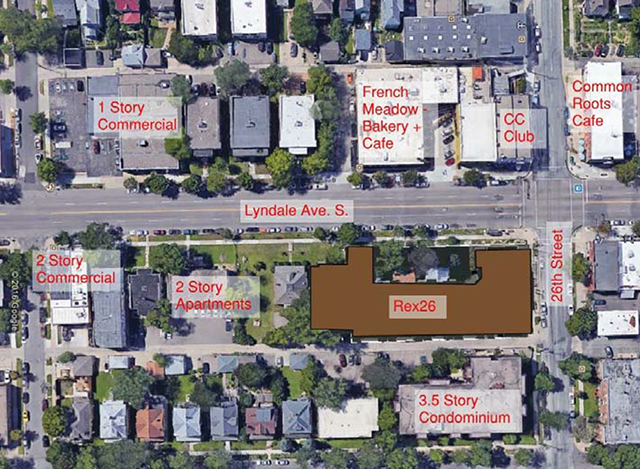 City of Minneapolis
An aerial view of the proposed Rex 26 project.

Unlike some other projects in the city (at the same meeting, a proposed development at the Sons of Norway property in Uptown generated two hours of testimony opposing it) only one person spoke against the changes: Danny Schwartzman, who operates Common Roots Cafe in the building kitty corner to Rex 26.

Schwartzman said that variances should come only if the community benefits and suggested a more meaningful affordable housing program for families at lower income levels than 80 percent of the area’s median income. He’d also like to see better outreach to the neighborhood than he’s seen so far by Master Properties.

When it was the officials’ turn to speak at the meeting, Commissioner Amy Sweasy said she had opposed the previous approvals because she thought they allowed a building that is too large. Therefore, she would oppose the latest — and even larger — iteration.

Others who had been supportive before were concerned that it appeared that Master Properties was trying to back into its initial proposal for the project — by taking multiple steps upward in density.

“You have been coming to the commission for a long time with this project and literally this project — when you just look at the metrics of it — goes all the way back to when we first started,” said planning commissioner John Slack. “And we had a lot of issues with it and we worked to get the building to where we could approve it. And now I feel like we’re just stepping back two years to where we were. This looks like the first concept we reviewed two years ago.”

In support of Master Properties’ variance application was commissioner Ryan Kronzer, who said he thinks the building is much better than what the staff and commission saw in early 2016: the exterior materials are better, the building massing is less-intrusive from the street and streetscaping is improved. “So I can hold my nose and vote to approve this project,” Kronzer said.

Commissioner Nick Magrino said that while he too was weary of the reconsiderations, he would have approved the original plan from 2016 and said the grocery store would be an important public amenity.

The vote on the variance was 4-2 against, with Kronzer and Magrino voting in support. The key vote was that of commissioner and new city council member Jeremy Schroeder who joined Slack, Sweasy and Commissioner Sam Rockwell in opposing the variance. (Commission President Matthew Brown, by tradition, votes only to break ties).

How rarely does the Planning Commission reject a variance request? While a tally for 2017 hasn’t been completed, just 3 percent of variance requests were denied in 2016.

But the matter isn’t over. Last Thursday, Gerberding appealed the variance denial to the Minneapolis City Council. It will go before the zoning committee on Feb. 15.