As Minnesota legislators filed in to the House and Senate chambers Tuesday afternoon, they could hardly hear each other over the chants.

Protesters dressed in bright red shirts filled the hallways outside both chambers, handing any legislator who passed them a “Welcome Back” card calling for action on gun control legislation this year. The protesters, from the group Moms Demand Action, shouted “you work for us” and “save our kids” so loudly they could be heard through the heavy wooden doors of the House and Senate chambers, as lawmakers took the pledge of allegiance and gaveled in the first day of the 2018 legislative session.

And this was supposed to be the quiet year.

After a drawn-out battle over Minnesota’s state budget last session, legislators expected this year to be reserved for the debate over bonding projects, a few policy issues and little else — a quick and painless session ahead of a competitive election year. But when lawmakers returned to the Capitol on Tuesday, they were greeted with a roar of protesters, an ongoing debate over sexual harassment in state politics and a massively complicated tax bill that could take the entire session — or maybe longer — to work out.

“Normally we come in and do some cleanup stuff, the bonding bill and start door knocking at the end of May,” Greg Davids, the Republican chair of the House Taxes Committee, said. “This year is quite different.”

‘These shouldn’t be partisan issues’

On opening day, the reminders that this year is different were everywhere, including the swearing in of two new lawmakers. Democrat Karla Bigham was sworn into the Minnesota Senate to represent a southeastern Twin Cities suburban district that includes Cottage Grove and Hastings, while and Republican Jeremy Munson was sworn in to the House to represent a rural southern Minnesota district. Their entrance into the Legislature significant: They replaced former DFL Sen. Dan Schoen and Republican Rep. Tony Cornish in special elections last week, who resigned late last year in the wake of allegations they sexually harassed women.

After she took the oath of office, standing on the Senate floor, Bigham said there’s still a major shift in culture needed around sexual harassment in politics, where uneven power dynamics and a faulty process for reporting complaints has left problems pent up and unaddressed for decades.

“There needs to be a culture change in more ways than one,” Bigham said. “These shouldn’t be partisan issues, and I think that is one of the messages that voters sent.”

In the House, many Democratic female legislators wore black to the opening day of session — as actresses in Hollywood have done at events like the Golden Globes — as part of the #TimesUp and #MeToo movements, which encourage women and men to speak up about sexual harassment. On Wednesday, all 134 House members are sitting through mandatory sexual harassment training. If they don’t attend, they could lose their spots on committees. 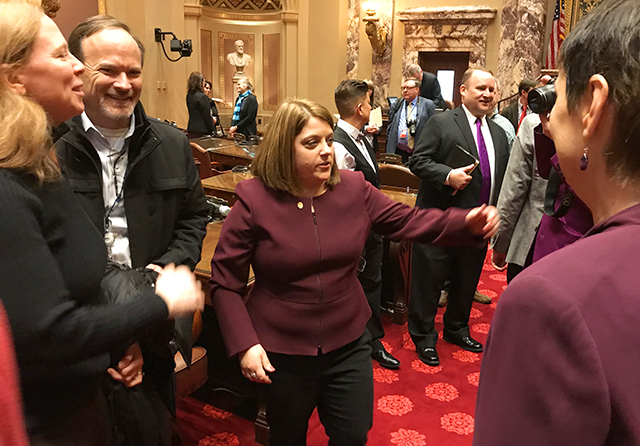 MinnPost photo by Briana Bierschbach
Democrat Karla Bigham, center, was sworn in to the Minnesota Senate to represent a southeastern suburban district.

DFL Rep. Erin Maye Quade, dressed in black, said she thinks training is a good first step, but there’s more that the Legislature should do.

Maye Quade was one of the women who shared her experiences of harassment from Schoen and Cornish, and she’s pushed for a task force made up of outside experts. They would meet and draft a series of recommendations to the Legislature on how to create a better process for reporting, investigating and following through on harassment complaints.

House leaders have created a subcommittee to look into issues of workplace safety and harassment this year, and in the Senate, leaders are looking to change their sexual harassment policy, which hasn’t been updated since 1996. Currently, for instance, the Senate policy doesn’t include a system for third parties — lobbyists, reporters and other non-staffers who work at the Capitol — to report harassment. But Republican legislative leaders have not agreed to create a task force.

Maye Quade said she’s hopeful there will be meaningful progress on the issue this session, but she still believes there needs to be input from people outside of politics: “Us just looking at this ourselves is what got us in this situation in the first place.”

On day one, taxes and the Constitution

The very first hearing of the 2018 legislative session was supposed to act as a primer on the likely biggest issue of the year: tax conformity. The passage of the federal tax bill late last year has created a complicated stew of new tax provisions that Minnesota lawmakers must consider.

If lawmakers don’t conform with changes made by the federal government, Minnesotans could have more than three dozen new lines to fill out on their tax forms. But if lawmakers do conform fully to the federal changes, many Minnesotans will face a tax increase down the road. The Department of Revenue briefed legislators in the House Tuesday on the situation, which could be one of the most complicated and contentious issues they handle all year.

“We’ve just been crunching numbers all day long, all week long, all year long so far, ever since the bill got signed, to try and figure this thing out,” Davids said. “I don’t see where we get to a point where we can hold everyone harmless. There are going to be some folks who pay a tax increase, but it’s my goal to have as few in that category as possible.”

Another issue hanging over the Legislature on day one was a constitutional conundrum, with an ongoing dispute over whether Republican Michelle Fischbach can serve as a senator and lieutenant governor at the same time reaching a new benchmark.

Under the Constitution, Fischbach, in her role as president of the Senate, became lieutenant governor in January, after Gov. Mark Dayton appointed former Lt. Gov. Tina Smith to the United States Senate, creating a vacancy in the office.

But Republicans argue a 1898 Minnesota Supreme Court case allows her to serve in both roles at once. On Tuesday, Fischbach made her first act as Senate president while also serving as lieutenant governor when she gaveled the chamber into session and took her seat in the chamber. 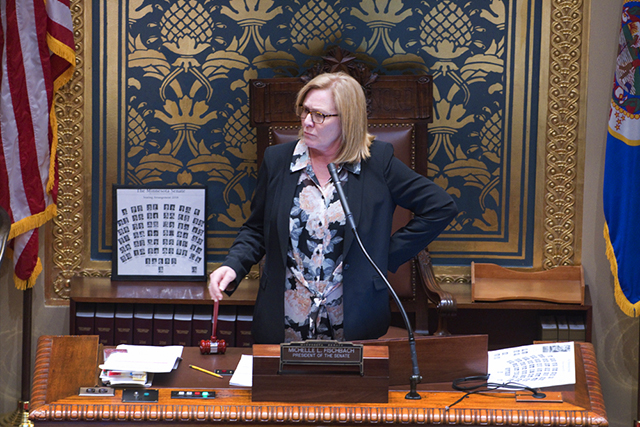 Photo by Tom Olmscheid/Workingpress Photo Agency
On Tuesday, Michelle Fischbach made her first act as Senate president while also serving as lieutenant governor when she gaveled the chamber into session and took her seat in the chamber.

In court, Democrats have challenged the idea that she can do both jobs at once, arguing it violates the separation of powers between branches and is expressly prohibited in the Constitution. A judge recently dismissed their lawsuit, arguing it was premature because Fischbach hasn’t voted in the Senate since she became lieutenant governor.

Instead of trying to block her from taking her seat in the chamber, which would have required a two-thirds vote from the chamber, DFL Sen. Ron Latz rose Tuesday to make a simple protest.

“We want the record to reflect my objection to lieutenant governor Fischbach presiding over the Senate,” Latz, of St. Louis Park, said. “So noted,” Fischbach responded.

The case will continue to unfold as the session progresses. Fischbach’s entrance into the Senate now puts her in a position to take votes as both lieutenant governor and a senator. That could make Democrats’ case ripe to take to the Minnesota Supreme Court, Bakk said. The outcome of the case could determine control of the Senate, where Republicans currently hold only a one-vote majority.

A push for gun control legislation

But the chants in the Capitol Tuesday weren’t about the Constitution or tax policy; they were about gun control.

Allison Broughton, who stood at the very front of a line of protesters in front of the House chamber, was one of hundreds of people who came to the Capitol on opening day to push for tighter gun control regulations. Many of the protesters were motivated to head to St. Paul after 17 people were recently shot and killed at a high school in Florida.

“I had joined this group as I registered my son for kindergarten, and I thought to myself, ‘What a depressing thing to have to link those two things together,’ ” Broughton said. “We are now going to be in this world where that is something to consider. It’s too much.” 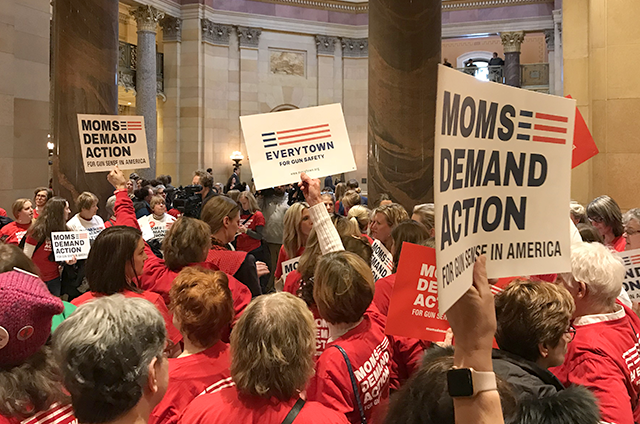 MinnPost photo by Briana Bierschbach
The chants in the Capitol Tuesday weren’t about the Constitution or tax policy; they were about gun control.

Broughton wasn’t optimistic that a divided state government would find any agreement on gun issues this session, but she wanted to make her presence known at the Capitol, both on opening day and throughout the next three months. Legislators are required to adjourn by May 21. She expects the biggest change could come later this year: “Come November, I think we are going to see a sea change.”

A loud start to the quiet year at the Minnesota Legislature